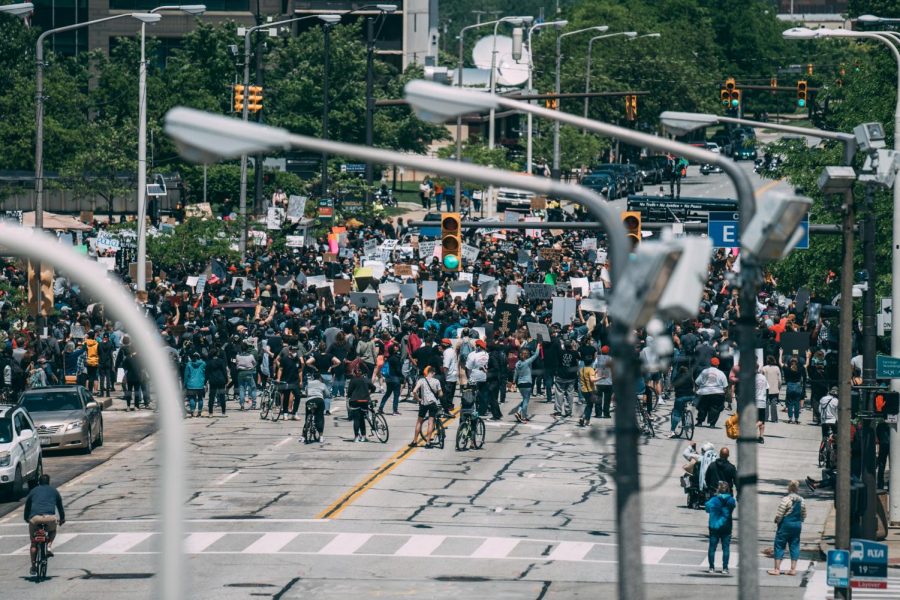 Protesters march in downtown Cleveland on May 30.

Shaker students were among the estimated 3,000 people who gathered in downtown Cleveland yesterday despite the COVID-19 pandemic to express outrage about the death of George Floyd and other violence against the black community across the nation.

The protest began at 2 p.m. at the Free Stamp downtown, adjacent to City Hall on Lakeside Avenue and East 9th Street. It was organized by Black Lives Matter Cleveland following protests around the country after the death of Floyd while in Minneapolis police custody.

On May 25, Floyd was pinned to the ground face down in Minneapolis while white police officer Derek Chauvin kneeled on his neck for more than eight minutes. Three other officers stood by watching. A store employee had called the police and said Floyd used a forged $20 bill at the grocery store. The officer who knelt on Floyd’s neck was arrested May 29 and has been charged with third degree murder and manslaughter.

“I think it’s important to go to the protest because it’s the most public and most vocal way you can speak out about these things besides posting on your social media and, you know, offering your support to the black people in your life directly,” senior Natalie Green said after the protest.

Protesters in Cleveland began chanting, “No justice, no peace” and “I can’t breathe.” Protesters displayed signs that stated, “Black Lives Matter” and “F*** the police.” Most protesters wore masks. A first aid station set up by the Free Stamp provided hand sanitizer, water and milk, in case tear gas was thrown.

Protesters first marched to the Justice Center, on Ontario Street between W. Lakeside and W. St. Clair avenues. The event began peacefully with marches and speakers at city landmarks such as Public Square and the Free Stamp. According to cleveland.com, protesters threw rocks and water bottles at the Justice Center and “BLM!” and “Pig!” were spray-painted on the walls. Inmates at the jail pounded on their cells. Later, two police cars were set on fire and the windows at the Third Street Deli were smashed. Some downtown businesses were broken into and looted.

Sophie Sickling (‘19) was tear-gassed at the Justice Center during the protest. She said the gas burned her eyes for about 10 minutes. “Once the tear gas was thrown, a bunch of people scattered, and then near the Justice Department they were putting cones on the tear gas [canisters], pouring water on it to try to stop it, or they were throwing it back at the police, which I think definitely escalated the situation,” Sickling said.

Helmick said the protest was inspiring because it gave her a feeling of community. “There was a point where we all kneeled to symbolize Colin Kaepernick and also all the kneeling that has been done across the country in the past years,” she said.

Kaepernick was an NFL quarterback who began protesting police brutality in 2016 by remaining seated, and later kneeling, during the national anthem before games. This movement spread through the NFL and eventually to athletes around the country, including at the high school. Kaepernick chose not to resign with the San Francisco 49ers because of his protests, and no NFL team since has signed him.

Floyd’s death comes after the recent killings of Breonna Taylor and Ahmaud Arbery. Taylor was killed by plain-clothed police officers in her Louisville apartment March 13. The officers who shot Taylor entered her apartment on a no-knock warrant around 12:40 a.m. while Taylor and her boyfriend, Kenneth Walker, were in bed. Walker assumed the officers were intruders, so he shot at their legs in self defense. The officers responded with 20 rounds of bullets, shooting Taylor eight times. The suspect sought by the search warrant had already been arrested that night.

Arbery was shot and killed Feb. 23 by two white men while jogging through a Georgia neighborhood. He was killed in broad daylight, but arrests were not made until May 21 after the video of his death circulated on social media.

Many major cities have instituted curfews, including Cleveland, where Mayor Frank Jackson declared citizens must stay inside from 8 p.m. to 8 a.m. beginning yesterday evening and lasting until tomorrow morning.

Senior Elena Landow said that it is important to show support during difficult times. “I don’t want to look back on these times and know all I did was lay around,” Landow said.

Protests took place in Akron and Columbus yesterday, too. Gov. Mike DeWine declared a state of emergency in Columbus and called in the National Guard.

About an hour after the Cleveland protest began, protesters began throwing rocks and water bottles at the Justice Center windows. Police began firing back with tear gas when protesters refused to disperse. This led to more violence and destruction throughout the area.

Junior Kayla Lowery said black Americans can’t continue to peacefully protest if no change happens. “In reality, a destructive protest is 100 percent a setback. It proves everything police fear and feeds the stereotypes. But, as we see, no matter how peaceful we are, racism prevails. But enough is enough, and if one can’t see how we feel through a peaceful protest, a riot is bound to happen,” she said.

Lowery and her friends agreed to stay in the background of the protest to keep themselves safe. “You don’t have to be the loudest or start a riot, but one’s presence shows their peers that they won’t stand for any injustice, and it brings together a community of all kinds of people standing up for a change,” she said. “I personally feel that to be silent is a crime.”

Emma Khayat, a sophomore protester, said the protest made her feel united with others there.

“Something about this feels way different. It feels way more revolutionary,” said Khayat. Khayat said that after other events that spark outrage in this country, action and feelings seem to fizzle out, and she thinks this time will be different.

Helmick said, “I went because I felt like it was really impactful for me being an African-American woman in America. It touches close to home.”