Investigation Finds No Evidence of Discrimination 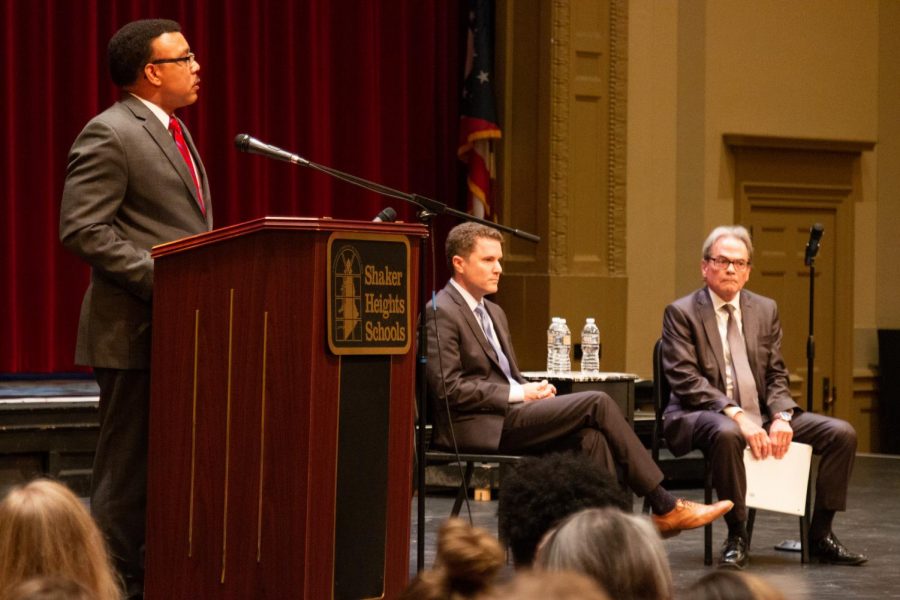 Interim Superintendent Stephen Wilkins makes opening remarks to the crowd of more than 900 community members who attended the meeting.

An Oct. 24 letter, from Dr. Marla Robinson, chief of staff, to Podl, was shared via Twitter and Facebook by the Shaker Heights Teachers’ Association after last night’s community meeting, which concluded in emotional allegations of systemic racial inequities in Shaker schools.

Podl, a Shaker graduate who has taught at Shaker for 20 years, is one of three staff members placed on administrative leave in the past month. The district’s decision to assign her to leave and its handling of the investigation were the subject of angry questions from some of the 900 or more people who attended the meeting in the high school’s large auditorium.

Podl was placed on leave Oct. 10 while the district investigated allegations of discrimination, and separate claims of harassment, intimidation and bullying. The district defines discrimination as harassment or bullying on the basis of race, color, national origin, sex —  including sexual orientation or gender identity — or disability.

The discrimination investigation was concluded Oct. 24 by Robinson. Her letter to Podl states, “The evidence does not support a finding of discriminatory action on your part.”

Forty minutes into the meeting, junior Olivia McDowell took the stage. She introduced herself as one of the students who filed a complaint against Podl, which Dr. John Morris, SHTA president, believes was the basis for Robinson’s discrimination investigation.

In a Shakerite interview, McDowell explained the interaction with Podl that prompted her complaint. “Everyone turns it into a racial thing,” she said. “I don’t think it was racially based at all.”

Though allegations of discrimination were cleared by the district, the investigation into intimidation, harassment and bullying concluded last week with a reprimand for Podl, according to a letter circulated by Morris Oct. 7. The SHTA filed today a three-part grievance over the district’s actions in Podl’s case.

Podl said she has incorporated readings, discussions and writing in her classes that focus on hot button topics such as the N-word, taking a knee during the national anthem, Confederate monuments and the #MeToo movement.

Podl’s junior year curriculum includes “Just Mercy” by Bryan Stevenson —  a nonfiction work about the importance of confronting racial injustice in the criminal justice system. Her senior students also have the option of reading this book. This year, Podl added “The 57 Bus,” a book that addresses issues of gender identity, race and equity, to her senior curriculum

After two students received in-school suspensions three years ago for posting screenshots of racist comments made by a third, Podl led efforts to bring facilitators to the high school from Facing History and Ourselves, a nonprofit international educational and professional development organization, to work with students and faculty.

“I have always been sensitive to racial issues and concerned about how to incorporate multiple perspectives in my work and our school’s work with students,” Podl said.