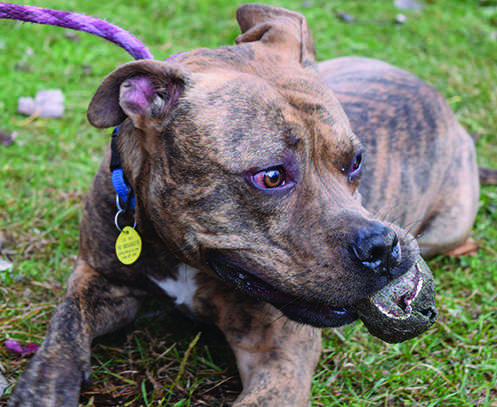 Toys, a 2-year-old pit bull mix and Cleveland City Kennel’s longest resident, carries a tennis ball while on a walk with a volunteer.

Shaker’s pit bulls may soon be a pet of the past.

Shaker Heights City Council held a meeting Nov. 6 to debate the proposed pit bull ban. The meeting was well attended and full of stories and statistics to support, or disapprove of, the dogs’ residence in Shaker.

City Council is going to vote on whether to ban new pit bulls and require existing pit bulls and other vicious dogs to be registered with the city, spayed, neutered, microchipped and vaccinated.

The drafted ban would require vicious dogs to be registered with the city.

“Right now we declare a dog vicious but we don’t require a registration,” said Gruber. “Now we will.”

Police dogs, therapy dogs and service dogs would be exempt from the ban.

If the ban passes, pit bulls would join a list of other animals that the city bans.

Some of the most memorable speeches in support of the ban were the stories of pit bull attacks.

“One story that stood out to me was that of a granddaughter whose grandmother was killed by a pit bull without any provoking of the dog,” junior Gus Mahoney who attended the meeting, said.

This story was told by another community member, Tequila Williams. Williams spoke on Nov. 6 about her grandmother’s experience of a pit bull attack. “No one thinks about the people who are being harmed. No one has measures put in place to prevent someone from being mauled to death, bitten to death, where they are getting surgery for the rest of their lives trying to repair the damage that a dog bite has done to them,” she said.

Williams was going to pick up two of her great-granddaughters when the dog escaped from a neighbor’s yard and attacked her as she was getting out of her car.

The pit bull was shot by a neighbor, but it was too late to save Annie Williams’ life.

“That was one of the sparks that led the mayor to look into it,” Gruber said. “It was a pretty gruesome and horrible tragedy.”

Residents had a lot to say during and after the meeting.

Shaker resident Lisa Smith, a pit bull owner, explained her stance. “I was impressed by the amount of people who are responsible dog owners and pit bull owners and people who don’t feed into what the media tells them to think about the dog called the pit bull,” she said.

Paul Ford, a Shaker Heights resident who was attacked by a pit bull and spoke at the meeting, does not believe the meeting’s discussion showed both sides of the argument clearly. “It was not successful in getting a cross-sectional view of the community on this issue,” Ford stated in an email.

“I thought the meeting showed there is a great number of people who own pit bulls and feel threatened by this measure,” said Robb Forward, another resident who spoke at the meeting, in an interview.. “I also got the feeling as though the mayor and several of the council members have made up their minds regardless of people’s opinions.”

Mayor Earl Leiken stated why he believed the meeting was necessary. “The city administration made a recommendation to the Safety and Public Works Committee that there be a ban on pit bulls going forward,” he said, “and in that process the safety and public work committee made a decision to approve the ban with the condition that people who currently had pit bulls would be able to keep their pit bulls, so that has been the recommendation that has now been taken to the city council.”

If the ban passes, the law will be enforced by both the city’s animal warden as well as the Shaker Heights Police Department.

According to Gruber, the city would find out about new pit bulls entering the city through complaints.

If the city finds a pit bull adopted after the ban, the city will issue an order that the dog is not permitted in the city and that it has to be removed within a certain time period.

The owner would have a right to appeal the decision.

“They could say for some reason their dog was grandfathered, or that it was not a pit bull and that the city had mistaken it, or that it was under the Americans with Disability Act and that they had the right to keep that dog because it was a therapy or service dog,” Gruber said.

The city would then decide whether to let the owner keep the dog.

If the appeal is not approved and the city decides the owner can not keep the dog, the city will have the owner remove it within 30 days.

During the meeting, community members shared their own pit bull experiences in Shaker.

“I only became aware of this pit bull ban after I was attacked by a pit bull and experienced the dog’s persistence in the attack and the way it attacked with no physical or auditory warning. This experience of how the dog attacked matches the various media representations of the nature of other pit bull attacks,” Ford said.

Community member Sandra Summers explained why she was moved to speak against the ban.

“I was a counselor for kids who made some poor choices and were labeled.

They were still good people. Labels are unjust, and we can’t say all of anything is one way. We can’t put things into categories. Labeling is wrong, whether it’s people or animals, so I felt like I should speak up,” she said.

With the ban still up in the air, community members have taken sides.

“I stand against the ban because breed-specific legislation never works. When you zone in on one specific breed, you do a disservice to humanity because there are so many very well-behaved pit bulls,” Beilier said. “There are very dangerous dogs of other breeds within our community. What you do is you pretty much prosecute and put the burden on the citizens who have done nothing wrong.”

“I disagree with the ban because I have two rescued pit bulls,” Smith said.

“At one time I believed the media and I was afraid of the dog. Then I learned the other side of the story, and I realized that I needed to grow as a person and not listen to what other people told me.”

Mahoney does not support a ban.

“But I do think that there should be some restrictions on how they’re kept. There were some good points made against-breed specific legislation, and I thought that was interesting,” he said.

“I was feeding my dog and I put my arm in front of him and he wasn’t paying attention when he was eating, because pit bulls eat fast, so he bit down on my arm,” said Reddick.

Reddick said she has never seen signs of aggression from her dog and describes him as being “calm.”

“After he bit me he laid under me because he knew he bit me,” said Reddick. “I had an infection in my arm where he bit me.”

Reddick was in the hospital for four days. However, she and her family kept King after the incident and have owned him for four years.

Veterinarian Dr. Alice Jeromin added her opinion on pit bulls being labeled as dangerous as a whole.

“I don’t think any breed of dog is dangerous unless they give me reason to think so,” she said.

“As a vet I’ve worked with all breeds of dogs and within those breeds, there are some that are more friendly than others. There are definitely shy dogs and more friendly dogs, just like in humans with different personalities.”

Nineteen states have passed laws to prevent local governments from enacting breed-specific legislation such as Shaker’s proposed law. Ohio is not one.

“The Cleveland APL does not support breed-specific legislation because it’s ineffective, unenforceable, and doesn’t protect public safety,” she said. “If anything, it diverts local enforcement efforts away from protecting the community from truly dangerous dogs to trying to enforce a law that will mostly impact good dogs and good owners.”

“If the ban passes, the APL would no longer be able adopt those dogs to Shaker Heights residents, which will make it harder to find them homes,” Tarcy said.

Nate Calabrese, a senior, began a petition protesting the ban. The petition included information from the U.S. Department of Justice and major animal organizations, all opposing breed-specific bans.

“Bottom line is, the ban is a bad decision because it’s based off the presumption that pit bulls are some inherently vicious, naturally evil dogs that exist to attack people,” said Calabrese. “I don’t think pitbulls are dangerous unless you neglect them. If you don’t treat them properly, or neglect them or don’t socialize them with pit bulls or other dogs or people, they can turn out nasty.”

Opponents of the ban argue that pit bulls’ behavior is reflective of their treatment.

“Shaker should make the owners responsible to train all dogs. My goal is hoping Shaker will put the responsibility on the owners, not the dog,” Summers said.

“We believe there are individual dogs from any breed that can be a problem regardless of the owner, however, the vast majority of the time, aggressive behavior can be prevented in any dog by allowing the dog to live inside as a member of the family,” said Tarcy. “Additionally, if owners comply with current licensing laws and do not let their dogs run loose in neighborhoods, which is also illegal in most places, the risk of being bitten by a strange dog would drop dramatically. Owners need to be held accountable for the acts of their dogs.”

Mayor Leiken spoke at the meeting as well.

“That’s what’s got my dad and a lot of people angry,” Calabrese said of the mayor’s words at the meeting. “I’m not really clear on this. His response is legal. It doesn’t show that he’s evil or out to get us. It just shows he wasn’t listening to what we were saying.”

Before City Council votes, community members share their hopes for Shaker’s pit bulls. “I would not support the city banning pitbulls because I think people think pit bulls are mean dogs, but if you get to know them they are actually very nice,” said Reddick. “My dog bit me by accident.”

“My hope is that City Council takes a look at other municipalities, for instance Cleveland,” said Beilier. “Cleveland has enacted a dangerous dog ordinance which covers all breeds. This way they are not targeting one specific breed. In my belief, what Shaker needs to do is they need to make sure all the ordinances that they already have are taken care of.”

Ford described a different desire among residents. “I don’t want this to be a community with a reputation that you need to carry pepper spray or stun guns when you jog in the neighborhood,” he said. “We need to both ban animals who have physical attributes that make them particularly deadly and we need to change the culture among pet owners to take responsibility to physically restrain their animals in public.”

Connie Rischendollar, a volunteer at Cleveland City Kennel, said individual pit bulls suffer from generalizations. “I got introduced to pit bulls in November of 2014, and it changed my life,” she said. “They are the sweetest, most loyal and affectionate dogs. Because they are looked at as a breed as a whole and not individual dogs, they are wrongly thought of as something they are not.”

The next council meeting where community members are invited to speak on the topic is Dec. 21. City Council will vote on the ban Jan. 12. Both meetings start at 6:30 p.m.