Outreach, Forecasts Suggest One or More Snow Days Next Week

Most recent snow day called with negative-13-degree wind chill; wind chill estimates for Monday through Wednesday are 20-40 degrees below zero 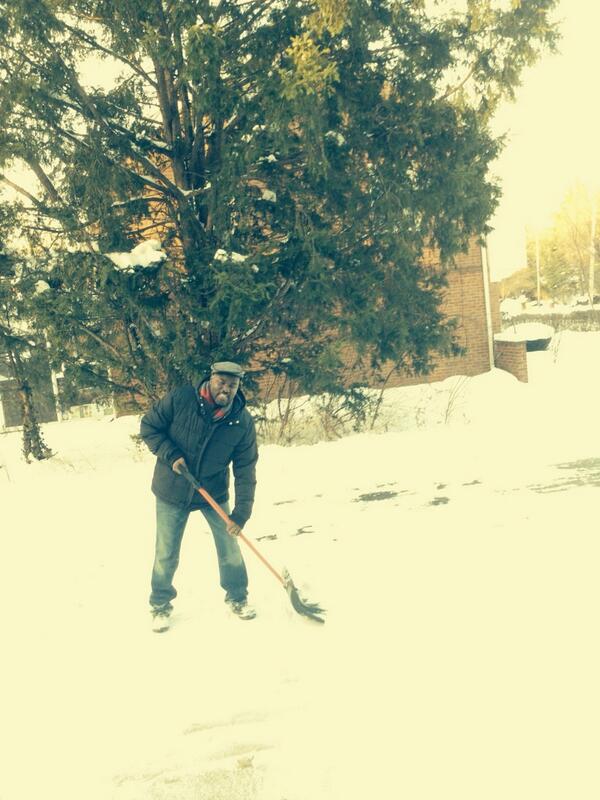 Hutchings tweeted this photo of himself shoveling snow Jan. 4. The tweet read, "Just wanted to shovel the snow at least one time...I'm calling the snow plowing co. for future snow days!"

District social media outreach to parents and frigid forecasts are fueling speculation that school will be cancelled one or more days next week.

Snow day? Be the first to know by following @shakerschools. Please RT to spread the word. #staysafeshaker

Shortly after Hutchings’ tweet, the district Facebook page posted a reminder to parents regarding where to follow school closing updates. It stated, “Every attempt will be made to notify parents and staff members by 6 a.m.” The top announcement on shaker.org has the same message.

The National Weather Service of Cleveland issued a “winter storm warning” for Cuyahoga County and seven other Ohio and Pennsylvania counties, “in effect from 6 pm Sunday to 9 am Wednesday.”

The warning, issued at 4:06 p.m. today, predicts “dangerous wind chills of 20 to 40 degrees below zero at times” Monday through Wednesday, and possible wind gusts of 35 mph.

It also warns that frostbite could be possible within 10 minutes of outdoor exposure on Monday and Tuesday. NWS forecasts three to five inches of snow Sunday night, with the heaviest snowfall between 5 pm and midnight. Driving visibility “may drop to near zero” after midnight Sunday, making clearing the roads a difficult task.

The warning asks drivers to use “extreme caution if travel is unavoidable.”

Junior Julia Thome said that she does not necessarily expect school to close on Monday. However, she speculated that the administration will cancel school on Tuesday because “it’s below zero, and the school has to be closed when it’s below zero.”

Thome, who walks to school, is more concerned by the snow than by the temperatures. “If I don’t feel safe driving on the roads, I don’t feel particularly comfortable on the sidewalk either. If the roads aren’t safe, I don’t think there should be school,” she said.

District Director of Communications Peggy Caldwell wrote in an email interview that the district has “no hard-and-fast formula” for closing school. “[The district] closed one day a few years ago when the wind chill was around -10, but it would be inaccurate to construe that as a rule,” she wrote. “Wind chill is certainly one of many variables to be taken into account in deciding on a school closing. Others include road and sidewalk conditions, precipitation on the ground and expected, conditions at the transportation center, heat and electricity, etc. No two situations are exactly alike.”

This was one of the rare snow days that then-superintendent Mark Freeman called during his 25 years in the post.

In the May 8 print issue of The Shakerite last year, Principal Michael Griffith said that there are a “committee of people” who assist the superintendent in deciding whether or not to have school, but ultimately it’s the chief educator’s choice.

In his first interview with The Shakerite, in April 2013, Hutchings said, “As long as our roads are clear and people are able to drive and buses are able to get to school safely, we’re going to have school.” He said his experience in Alexandria, Virginia, would not impact his policy on snow days here. “Here [in Alexandria], we close school if we have one inch of snow,” he said.