Now You Can Vote to be Mean 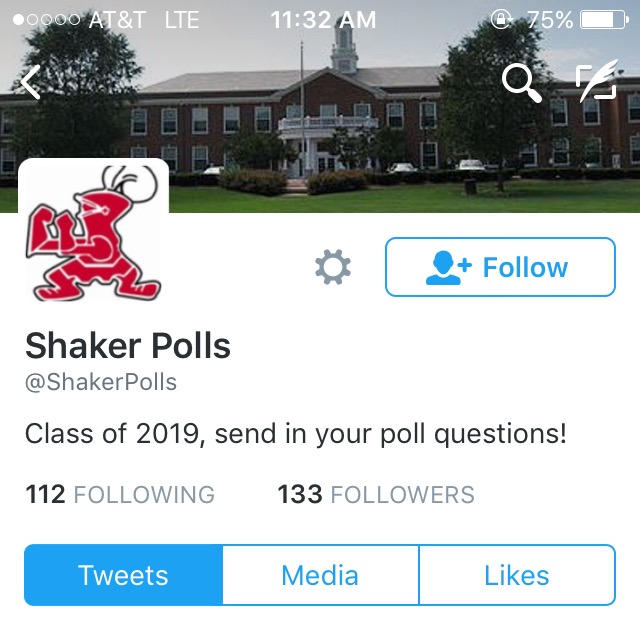 Twitter recently updated its server. Besides replacing the favorite function with a like function and adding a “Moments” feature that allows users to access current events, Twitter has also added the option of creating a poll within a tweet. Users can vote anonymously.

This update has prompted users to create “anonymous” accounts with names such as “Shaker Polls” and “Cleveland Polls.”  These account owners tweet polls about Shaker and Cleveland school students. Cleveland Polls’ most popular poll received 1,731 votes.

However, tweets such as the polls could be considered libelous and their creators can be sued. In the United States, a libelous statement must be false and damaging to an individual’s reputation, and the person who made that statement must have been at fault, meaning that he or she knew that the information was false but published it anyway, or should have known and published it recklessly. Damaging statements would cause someone to experience shame, harassment, emotional distress, or professional loss or financial loss, for example. One Shaker Polls tweet asked followers to vote on how much marijuana a student smokes.

Two years ago, Shaker students were in a similar situation. According to a 2013 Shakerite story, a Twitter account by the name of “Shaker’s Top Ten” tweeted a list of 10 high school girls, including their last names, calling them the “Cutest Girls of November.” In the article, Shane McKeon wrote, “For something that shameful, the opposition was embarrassingly quiet.” At the time, students had no idea who ran the account. Though some people viewed the account as an amusement (one of the 10 girls retweeted the list), others were offended.

Gossip and other social media accounts have passed through Shaker, giving students chances to anonymously post harmful and often false information about peers. A 2012 website called DASH prompted controversy with “tips” about students’ social lives. In 2013 a Twitter account called the “Shakerong” mocked The Shakerite with playful tweets such as “Israeli Culture Club fights with the Palestinian Culture Club.”

The new account, Shaker Polls, intensifies the effect of its predecessors. Because the polls allow students to amplify the impact of harmful statements by voting for them, Twitter’s new feature may prove more damaging to those it targets.  Now, anyone with access to Twitter can send in a poll or vote anonymously. As with any anonymous social media account, students speculate about the owner. However, false rumors about who owns the account could also be harmful.

Assistant Principal Sara Chengelis said the administration is aware of Shaker Polls.  “We were notified of this Twitter account by parents that had called in regarding how mean it was,” she said. “We do try to determine the owners of  accounts like this, but because of the nature of these sites, it’s really hard to find out who the account belongs to.”

Chengelis also said the police were notified, however, there isn’t much they can do in this situation. “It didn’t rise to the level at which it was breaking a law of any sort, so the police recommended that we report it to Twitter,” she said, and the administration did so. When Twitter received the administration’s message, they said that if the account started to break Twitter’s rules, they would intervene. To Chengelis’s knowledge, nothing has changed.

In past situations, Chengelis said that students would usually take down the accounts before the school had to get involved. “We went up to the student, and I said, ‘I don’t know if it’s you, but I think you are involved in this in some capacity or know who is, and the account needs to be taken down.’ By the time I got from the third floor to my office, the site had been taken down,” she said.

Freshman Jeff Hubbard, although mentioned in the polls, does not consider them harmful. “I think some of them are kind of mean, but like, most of them aren’t genuine,” said Hubbard. In addition, Hubbard said that there is no need to take down the polls, and that they are a source of amusement.

Another freshman who is a frequent subject of polls said that the account can cause problems, but “there were a couple tweets from the account said that it was supposed to be a joke, so I don’t think that anyone should, like, overreact to it.” The student also said that he believed the owners didn’t know they could be sued for libel. He said that the owners would not have made the account if the knew it was breaking the law. “I guess they’re mean . . . like, I’ve had kids come up to me and talk about how they voted for me to leave and go back to eighth grade, but I knew they weren’t serious,” he said.

This student said the account owner is not the only one to blame for these statements.“Shaker polls is… I mean, I guess if you’re posting about someone else it’s mean, but it’s just as much your fault if you’re voting about it. I can’t say that I’m entirely blame-free because I’ve voted on the polls,” said the freshman. “I think everyone has.

“If you really want to shut it down, just stop voting.”