Board Promises to Get House in Order 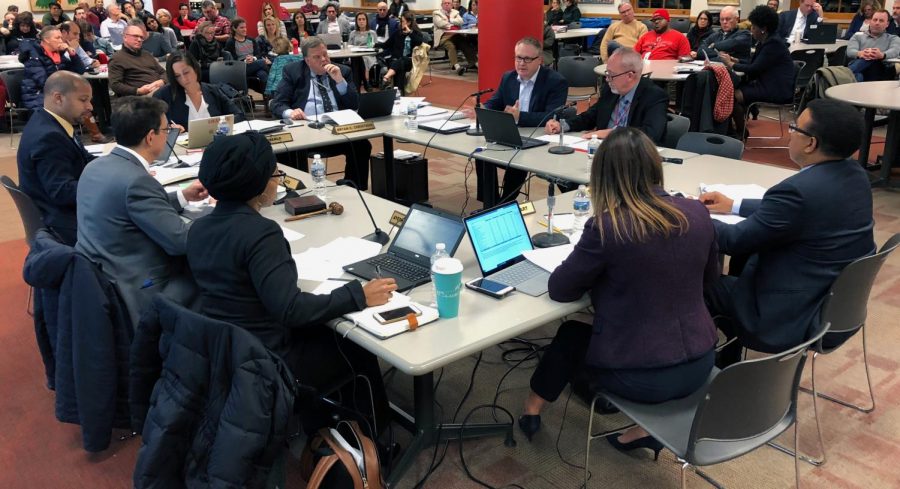 Board of Education members discuss plans for Fernway with architects.

More than 150 community members attended Wednesday’s Board of Education meeting. Some came to critique the board’s handling of Jody Podl’s administrative leave; others came to hear the board’s decision on the allocation of funds to rebuild Fernway Elementary School, which was damaged significantly by fire July 10.

Anticipating a crowd, the board relocated to the high school’s upper cafeteria from the small auditorium to accommodate more spectators.

Board president Jeffrey Isaacs began the Nov. 14 meeting by reading a prepared statement.

“It’s probably an understatement for me to say that recent events and personnel issues have attracted quite a bit of public attention,” he said. “I know. I live here, too, as does every board member at this table.”

First was the handling of the complaint about Podl. “We have students here at the high school who believed they were being bullied by a teacher,” he said. “Those complaints were investigated.”

Isaacs also noted the instance of a cheerleading coach accused of body-shaming: “We’ll have a new team installed shortly.”

Lastly, he acknowledged the recent placement of Principal Jonathan Kuehnle on administrative leave.

“The bottom line — when we found out about a problem, we acted. Not always as fast as we should. Not always perfectly. But we acted the best we could for our students,” Isaacs said. “We will deal with these situations, one by one, and get our house in order. You have my word on that.”

Following Isaacs’ introduction, the public comment portion of the meeting commenced, exceeding the allotted 30 minutes. Speakers addressed two subjects: their opinions on the discipline of Podl and the rebuilding of Fernway.

First in line was Shaker Heights Teachers’ Association President John Morris. In his statement, he discussed Podl and his letter protesting her treatment by the administration.

“You may disagree with the letter I felt I had to share, but I had no intention of identifying students,” he said. One student identified herself as the source of a complaint against Podl at last Thursday’s community meeting.

Before that meeting, Morris’ released a letter detailing and criticizing the administration’s decision to remove Podl from the classroom after a student complained about an interaction with her. The letter did not name any students. In it, Morris alleged that Dr. Terri Breeden, assistant superintendent of curriculum and instruction, failed to follow due process requirements in issuing a reprimand to Podl. The SHTA has filed a three-part grievance over the administration’s actions.

“Don’t perpetuate an ‘us vs. them’ argument when we are among the most dedicated advocates and supporters of Shaker students. This damaging and divisive rhetoric has to end now,” he continued.

High school English teacher Aimee Grey spoke after Morris, asking the board to alleviate the atmosphere of hesitance and fear she said is present in the high school. “I request that the Board formally articulate exactly which kinds of situations merit a teacher’s removal from the classroom, and that only in those specific situations should a teacher be put on leave,” she said.

“If teachers are uncertain about exactly what kinds of situations merit removal, we begin to ask questions about when we might be put on administrative leave: If I give a grade a student doesn’t like? If a student disagrees with me? If a parent or student is frustrated with me?” Grey continued. “If teachers feel unsupported and uncertain, that will impact their effectiveness because they will be forced to second-guess every decision.”

Grey also expressed concerns about the line between an investigation aimed at finding facts, versus one that turns into a “witch hunt.”

“If the concern is teacher ‘bullying and harassment,’ what safeguards do we have in place to prevent the fact-finding from becoming a free-for-all witch hunt, where every disgruntled student who has ever felt slighted comes forward?” Grey asked. “Will honest criticism of an assignment that doesn’t meet expectations be categorized as an ‘intentional act that causes emotional harm?’ ”

The second-to-last speaker, Katrice Stinson, took exception with statements by Morris. “I also had an opportunity to read the letter from the Shaker Heights Teachers’ Association in support of Ms. Podl,” she said. “I didn’t see anything in support of the student — or students, as it may be — that made their feelings and concerns and pains known.”

Stinson, who is African-American, went on to allege that Podl harmed her son’s self-esteem while he was her student in 2012.

“In 2012,” she said, “we nearly escaped a lawsuit between myself and the Shaker Heights community based on the actions of this one teacher.”

Stinson said she had documentation in the form of e-mails between herself, Podl, former Principal Michael Griffith, retired guidance counselor Eileen Blattner and then-superintendent Mark Freeman. She also said she had “the written agreement that we had agreed to to avoid the lawsuit between Shaker and myself and my family for what she did to my son.”

She said, “If you want a lawsuit, we can do it, no problem. No problem for me.”

In an email received today, Stinson stated that the agreement was “not a formal written settlement agreement as no lawsuit had been filed at the time.” Instead, she stated, “it was an agreement that was reached via a series of meetings and messages, that all parties followed and monitored.” She did not provide the messages in the email.

At the beginning of her meeting comments, Stinson identified herself as a “former litigator.” She was disbarred in 2012 by the Court of Appeals of Maryland for a “pattern of misconduct” and a “dishonest or selfish motive” in her actions.

“As teachers, most of us have long memories and even longer email inboxes. Very few of us get rid of anything. So we tracked down information about the issue, and what we know from looking at the documents is that there was never a separation agreement to our knowledge between Ms. Stinson and the district or Ms. Podl or the school,” Morris said.

Morris added that Podl has never had a student removed administratively from any of her classes.

Morris said the complaint evident in the email chain concerned the International Baccalaureate program. Students who pursue the IB Diploma during the junior and senior years are required to write an IB essays and submit them to IB evaluators outside of Shaker Heights. At the Board meeting, Stinson said her son was a member of the IB Diploma program.

“The only complaint we saw was that for the IB junior year end-of-semester essay,” Morris said. “Ms. Stinson was unhappy that Ms. Podl could not give written feedback on her son’s essay.”

“IB has rules about how much help students can receive for their first-semester essay, and the mother blamed Jody, even though we were following IB protocol,” Mason said.

Morris said, “In [IB] protocol, you give written feedback on a sheet, but you’re not supposed to get in the weeds and edit and proofread and do all those tweaks on the draft. From the emails that I saw, that’s what Ms. Stinson was expecting from Ms. Podl.” He added that Podl had the support of Mason, Blattner, Griffith and Dr. Marla Robinson, chief of staff.

Mason remembered more complaints beyond this IB essay, though. She said the mother “questioned Jody’s evaluations of him to the point where Jody would have me grade the essays to see if I came up with the same, you know, general grade that she did. I always agreed with her.”

Morris added that Stinson’s complaints about the essays were probably not why administrators got involved. “It wasn’t so much the involvement of the essay, it was the consistency of Ms. Stinson’s complaints,” he said. “Once you have a parent emailing a teacher multiple times and probably reaching out to counselors, that’s how we deal with complaints, typically; we take a team approach.

“And Ms. Podl utilized all of those people who were involved in this student’s team. It doesn’t mean at the end of it Ms. Stinson was happy.”

Blattner said she didn’t recall any meetings between Podl and the mother. Mason did. “I believe we sat down with the mother together, but I’m not 100 percent sure about that, but she told the mother, at any rate, the department chair had also looked over the essays, and her grades were consistent with what Jody was giving him,” she said.

“If there was ever any talk of a lawsuit, I never heard it,” she said.

Stinson, who said she was not on the list of registered speakers, left the meeting immediately following her comments. She didn’t leave any documentation behind. The phone number she gave a Shakerite reporter had 11 digits. The Shakerite called six combinations of this number and three other numbers associated with Stinson online to no avail. Stinson responded to an email inquiry, but at the time of publication, had not provided any documents despite two email requests.

The Shakerite has requested any documents retained by the district per Stinson’s description. Executive Director of Communications Scott Stephens chose not to comment on Stinson’s remarks at the meeting.

Another African-American woman, Vicki Elder, took the microphone after Stinson and discussed her experience as a Shaker parent. She said her nephew, whom she was the guardian of, graduated from Shaker in 2010. Not referencing specific teachers or experiences, she said, “There are teachers on our staff that need assistance teaching all types of children with all types of challenges.”

“In working with the teaching staff, we were able to resolve things, because I could be there,” she continued.

In a follow-up interview, Elder elaborated on her statement. “I had not intended to speak. I was hopeful that I would’ve heard a more balanced support system, and was very disappointed that the entire focus was on lauding the teaching staff at the expense of the student,” she said. “I don’t disagree that Shaker has excellent teachers. I disagree that every teacher in Shaker is excellent.”

Interspersed among the statements about Podl were members of the Fernway community petitioning for the board to pick the most costly plan for rebuilding Fernway. The board announced its decision to commit $3 million in addition to the insurance money provided, with hopes of soliciting additional funding from outside resources.