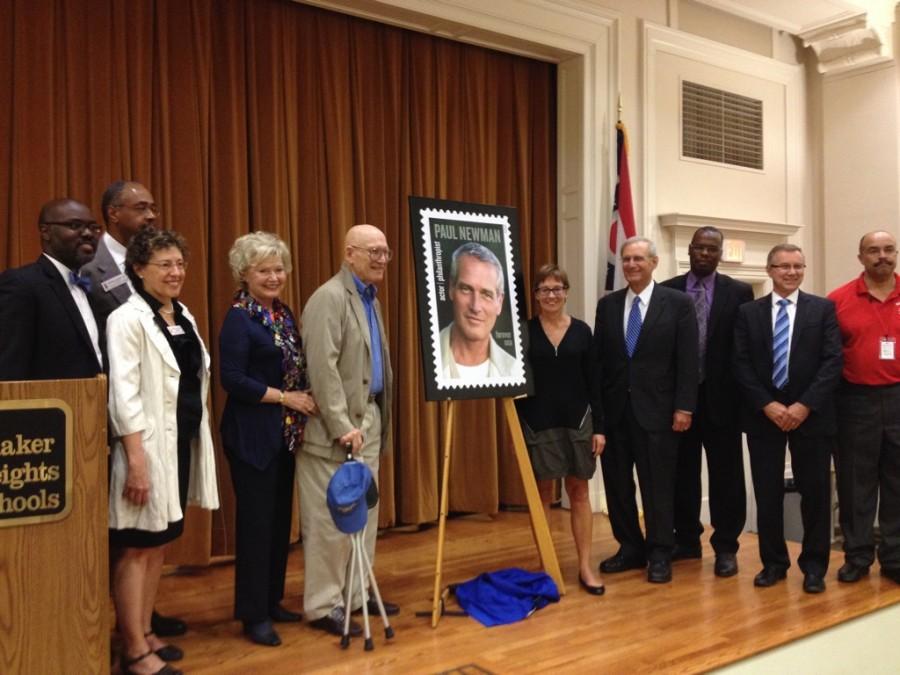 One of Shaker’s most prominent alumni earned a stamp of approval Sept. 18.

Paul Newman (’43), actor and philanthropist, was honored with a United States Postal Service stamp while 91-year-old Arthur Newman (’42) and about 20 other guests looked on in the small auditorium.

The stamp, which reads “actor – philanthropist,” was presented and displayed earlier that day at Playhouse Square Theater in downtown Cleveland, but the Shaker observance was welcomed. “This particular event, involving Shaker, would be very significant to [Paul],” Arthur said.

The stamp is a Forever USA stamp, meaning that its price of 49 cents will not change with the fluctuating postal rate.

According to Peggy Newman, Arthur’s wife, the brothers “did not distinguish themselves academically” at Shaker.

However, Peggy said that “just because they did not graduate with honors did not mean that they couldn’t go on with honors for the rest of their lives.”

As many were, Arthur was impressed with the stamp created in his late brother’s honor. Paul Newman was born in 1925 and died in 2008.

Superintendent Gregory C. Hutchings agreed.  “It really captured Paul as an actor and a philanthropist,” said Hutchings. “This is another example of what Shaker students are capable of.”

He also said, “I love his  salad dressing!”

Paul’s company, Newman’s Own (which sells a variety of goods, from popcorn to salsa to the salad dressing that Hutchings loves) has created hundreds of millions of dollars in revenue, $430 million of which has gone to charities.  He also founded the program SeriousFun, a network of camps designed for children with serious illnesses.  He was not only successful in philanthropy, but also acting.  He was nominated for 10 Academy Awards and 15 Golden Globes and won an Oscar for Best Actor in the 1986 film “The Color of Money.”

Arthur said, “I could talk until the year 2562 about his achievements, not just in the artistic, but in the humanities fields and in charity; and for all of those things, I am proud of my brother.”