The Mitchell Mural: Bookended By Controvery 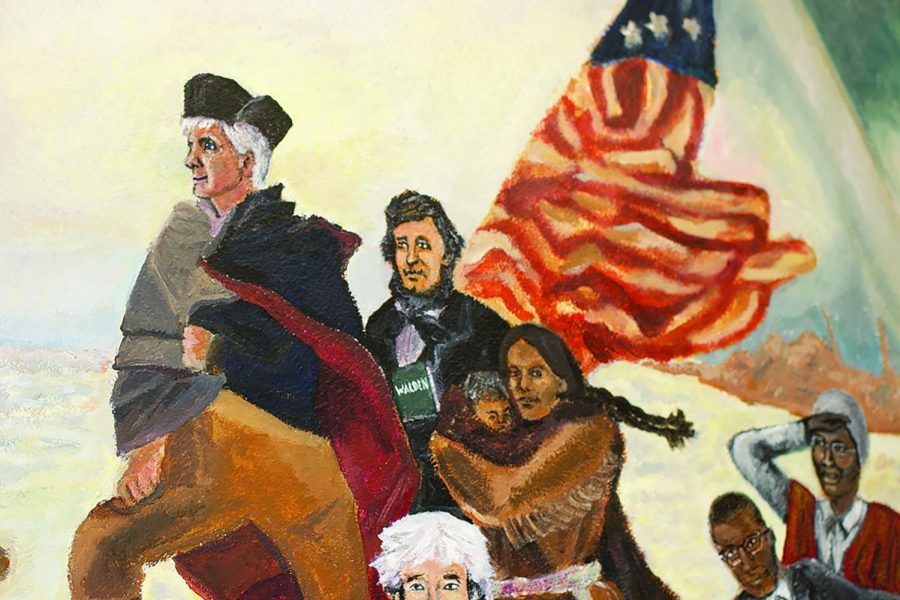 The mural of former teacher Timothy Mitchell painted as George Washington was met by controversy in 2011.

Editor’s note: The Shakerite published the following story in its Sept. 26, 2011 print edition. It is reprinted here to provide context for the decision to modify the mural.

For their senior project, 2011 graduates Michelle Scharfstein and Gabe Gordon painted a mural in the hallway across from Mitchell’s office in Room 223. Art Department Chairman Dan Whitely oversaw the project.

Over time, however, Whitely and other teachers become increasingly uneasy about the idea, and Whitely asked the two to keep George Washington’s face and write Mitchell a dedication on the mural instead. According to Whitely, the three agreed upon the change.

According the Whitely, the portrait was fully “completed” the afternoon before it was due.

“They asked me to sign the papers saying it was completed. I said, ‘I’ll sign them in the morning when I see you.’ This was at 4 o’clock,’ Whitely said. “When they came in the next day… I said, ‘Well, let me see the final piece first [before the signing the papers].’”

According to Whitely, between 4 p.m. and 9 a.m. the next morning, Scharfstein and Gordon painted Mitchell’s face in place of Washington’s.

The seniors admit to mishandling the situation. “I believe there was a lack of communication on behalf of Michelle and I,” Gordon stated in a Facebook interview.

“I believe Mr. Whitely took our lack of protest as an agreement to change our idea while we were spending the entire time debating whether or not we should change it, torn between staying true to our artistic concept and vision and making concessions to please others,” Gordon stated.

“The last day we decided [to paint Mitchell]… I think Mr. Whitely took this as a last-minute, going-behind-his-back move, when in reality it was no such thing. I admit that I believe the situation could have been dealt with a lot more smoothly had Michelle and I been more vocal with Mr. Whitely with what we were thinking.”

Overall, Gordon and Scharfstein are happy with the outcome of this process.

“In the end, our mural turned out the way we wanted it,” wrote Gordon. “It is a reflection on American history, a tribute to great leaders who made a difference and inspired innovation in a variety of fields, sprinkled with what we intended to be a little bit of humor. It is also a visual representation of a coalescence of our personal passions. Art is meant to inspire, evoke change, maybe stir some controversy, though the latter was never our intention.”

Whitely pointed out that unlike the artists, the murals remain at the school after graduation. Other murals around the building are still relevant a few years from now.

The graduates stressed that historical relevance was not their main concern.

“Our aim was to honor two teachers, Mr. Mitchell and Mr. Whitely, who had influenced us in the best possible way throughout high school,” Scharfstein wrote in a Facebook interview. “Our idea was to combine our passions for history and art, cultivated by these two teachers, in a mural that included inspirational American figures who were innovators and explorers in their fields. We wanted to honor Mr. Mitchell, a teacher who we felt inspired us to learn and explore the field of history, by placing him amidst the other important figures.”

Whitely noted, however, that the mural is not displayed in the hall where everyone can see it.

Mitchell taught both students in Advanced Placement United States History. Regarding the mural, he said, “I accepted the concept because it was important for the painting and the students involved, and I think it’s unfortunate how it transpired.”

Acting on a directive from Principal Jonathan Kuehnle Oct. 17, the high school art department painted over the face of Timothy Mitchell on a mural portraying him as George Washington and another mural in which he appeared in the background.

Mitchell pleaded guilty to child endangerment and was sentenced Oct. 12 to nine months in prison after admitting to having sexual relations with a student 22 years ago.

The mural of Mitchell as Washington, located in the hallway leading to Room 224, was painted in 2011 by two of Mitchell’s students, Gabe Gordon and Michelle Scharfstein, for their senior project. The other mural, painted by two seniors in 2007, depicts retired social studies teacher Dann Parker crossing Abbey Road with other historical figures.

“They did it behind my back — that was the worst part of it,” said Whitely, himself an artist who specializes in public murals and who now teaches studio art and design for the Excel TECC Consortium.

Despite violating the rules of senior project, the mural remained untouched for six years, and neither student faced consequences.

According to science teacher and senior project adviser James Schmidt, teachers and advisers cannot punish a student who breaks the rules of senior project. “There’s no real disciplinary action we can have with the student at that time,” he said.

“Any discipline has to come from the administration, and it’s their call as to if they want to do something with the student or to the student,” he continued.

Schmidt explained that for seniors to have their murals approved, they must first present a mock drawing to a committee, which comprises senior project advisers, art teachers and an administrator.

“It doesn’t have to be fully finished, but it has to be enough that we know what their intention is to put up there,” he said.

The committee then discusses whether the mural is appropriate and presents critiques for the artists.

Schmidt said that murals are usually untouched after they are painted. “The goal really has been that once a mural goes up, it’s supposed to stay up,” he said.

“It certainly gave the kids the wrong idea. There’s the wrong way, there’s the right way and there’s Shaker’s way,” said Whitely, “and that was more discouraging than anything else.”

Kuehnle said that after Mitchell was sentenced, he received requests from students and staff to cover the mural.

According to Art Department Chairwoman Karen DeMauro, Kuehnle asked her to paint over the entire mural after Mitchell’s sentencing. However, she believed painting over Mitchell’s face with Washington’s was the better option.

“I felt that to paint over the whole mural would be upsetting to the kids that actually painted the mural,” DeMauro said.

Kuehnle agreed that her solution worked best. He contacted the artists, who approved of the choice to modify the mural.

Whitely also argued for the preservation of the mural. “The rest of the mural is worthy. It shouldn’t be taken apart,” he said.

Senior Sriram Sundararajan, a former student of Mitchell’s, believes the situation was appropriately handled. “I think they made the right decision because Mr. Mitchell obviously does not represent the Shaker values or values that we have displayed in a school,” he said.

“Although many of us who had him thought he was a good teacher and may remember positive things about him — especially now when all of the allegations have come to light and he’s been sentenced to jail time — I think it’s probably time to remove anything that’s portraying him positively from the school,” Grossman-McKee said.

“If you want to send a message that you’re supporting the victims and you respect due process, you can’t have murals of that around the school,” he added.

“I don’t know if playing with the mural is going to trivialize the sadness of the situation,” Whitely said. “I think it’s a different kind of discussion about how the policy of murals should be and if it’s something to rethink.”

Kuehnle said students and staff expressed gratitude for the modifications. “I’ve had many people say, ‘Thank you. We can heal, we can move on.’ ”