Why did you decide to run?

Megan Jones described Student Council as “something I really wanted to do for awhile,” and this year she finally got the courage to run for secretary. “I love being a leader and I think it’s a perfect extracurricular for me,” she said.

Did you run last year or at any other time/have you held office previously?

Jones said she is very excited because this is her “very first year ever for Student Council.”

What’s your campaign strategy? Are you using social media?

“I have tended to stray away from social media sites,” Jones said. “I decided to go with really big, artsy posters.” Jones said she drew all of her posters herself with little help from friends. She added, “I’m making stickers, and cupcakes are on the way.”

Why should people vote for you? What are your advantages over the other candidates?

Jones cited her qualifications as creativity, dedication, hard work, really organized and neat handwriting. Jones said, “I feel like they’re the perfect skills for a secretary.”

If elected, what three things do you need to achieve to feel you have been successful?

Jones said she hopes to be “an active member through fundraising. Definitely through funding prom.” She also would like to become “more active in the hallways for spirit week.” Finally, Jones would like to be successful in “influencing people to be upstanders, not bystanders when confronted with bullying.” Jones said her focus would be “basically, making Student Council more successful,” because she’s heard of unsuccessful Student Council years. 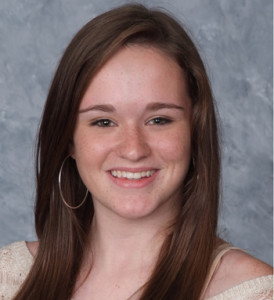