MAP: We Can’t Escape It 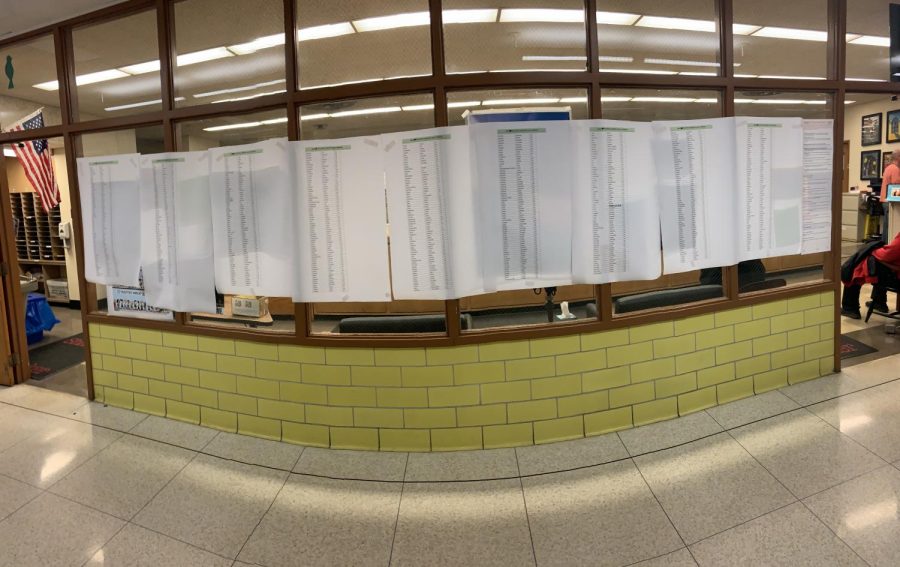 Freshman and sophomore students' testing locations are posted in the main hallway.

Freshmen and sophomores thought they were done with MAP testing after graduating from the middle school, and after learning just last week that they’d have to take it again, they were not pleased.

“I don’t like it, especially because the test is for sixth graders,” sophomore Ayande Joseph said.

Freshmen and sophomores took the Measure of Academic Progress English test yesterday during second period. Today, they took the MAP math test. The high school is following an assembly schedule, which extends second period, to accommodate the tests.

The MAP test’s job is to track students’ growth between testing events. Principal Eric Juli said that there are three reasons for the district’s decision to administer the test, which Juli communicated to teachers March 1.

First, Juli said Ohio no longer requires ninth graders to take the English End of Course Exam. Although this is “good because it’s one less graduation test to take,” said Juli, “we still need to know if students are on track to take the tenth-grade English graduation test.”

Juli said these MAP tests will provide data to help the school determine where students are near the end of their freshman year so they can be prepared to take their sophomore EOC exam, which he calls a “graduation test.”

Juli said the high school is adding intervention courses for students who are struggling in English, math, science and social studies. “The intervention courses are intended to help any student who needs help passing the EOC or passing a class, or learning content they didn’t learn the first time,” he said. MAP test scores will be considered when assigning students to take the intervention classes, which will be taught by current Shaker staff.

Juli said a change in Ohio’s graduation requirements also prompted this week’s MAP tests. Ohio students must pass six End of Course Exams to earn a diploma. In the last few years, the state has allowed five “alternative pathways” for students who did not pass the tests to graduate.

“It gave us a safety net for anyone who was struggling to pass the tests,” he said. But this year’s seniors are the last group who can graduate through an alternative path, so passing the EOC exams will be even more important for students going forward.

“I’m not looking to add more tests — we take plenty of tests — but I am looking for every single student to graduate from high school,” Juli said. Juniors and seniors did not take the MAP tests this week because the district can use their PSAT and SAT scores to assess EOC readiness.

“It’s really frustrating to kids when somebody says to them, ‘I think you should be in this and I think you shouldn’t be in this’ ” class, Juli said. Taking the MAP will help set criteria for who should take what classes, he said.

But MAP test scores alone will not determine students’ schedules. “There are always other factors,” said Juli. “We don’t ever deal in absolutes like that, but it matters that you try on it because we are gonna use the information.” He advises students to try their best because if they do not, students may have to take an intervention class or a lower track class.

Sophomore Diana Martins said, “I’m trying harder than I normally do this time because I heard that it could possibly determine class placement.”