Aging facilities affect learning environment, but new buildings are not in the plans 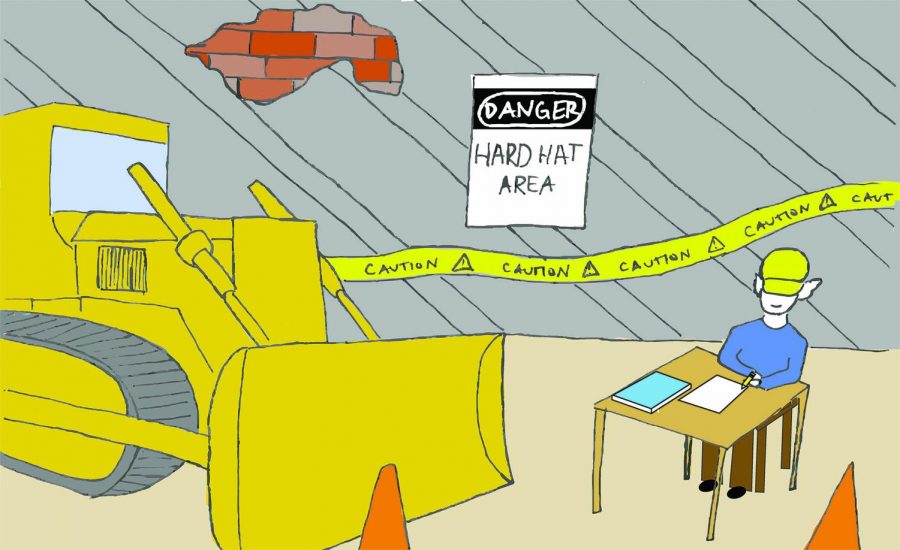 Shaker prides itself on historic and beautiful school buildings, but nothing lasts forever and Shaker facilities such as the middle school need repair or renovation.

The NCES website also states that, after 40 years, a school building begins to rapidly deteriorate; and, if not renovated, then after 60 years, most schools are abandoned.

In 2015, the Shaker Schools district began creating a long-term facility plan to address all options on updating and maintaining the school buildings. This facility plan is part of the Five Year Strategic Plan, a blueprint created by a 44-person team of students, staff, community members and School Board representatives aimed at achieving the district’s goals for 2014 through 2019.

In 2015, the district became eligible for grant funds from the Ohio School Facilities Commission Classroom Facilities Assistance Program to replace or renovate buildings, which allowed them to begin working on the facility plan.

Before creating the plan, the district decided to receive community input through a process they call “Educational Visioning.”

“Before developing our facility maintenance plan, we decided to pause and reflect upon whether our buildings need to be adapted for 21st century education,” stated the Board of Education on shaker.org.

At the sixth meeting, on April 7, 2016, the nearly 90 participants decided the best plan for Shaker’s facilities was to construct a new 5th-8th grade school building and turn Woodbury Elementary School  into an administration building and recreation center.

However, the Board of Education released a statement Aug. 18, 2016, announcing that they would instead replace the middle school with a new facility on the same site and do major maintenance on all other buildings. The middle school, built in 1957, is Shaker’s youngest school building.

The board wanted to place a $55 million bond issue on the ballot in May 2017 with $19.9 million going toward a new middle school and the remaining $35.1 million toward other buildings’ maintenance. The state would contribute $6.3 million to building the middle school, bringing the total estimated cost of a new middle school structure to $26.2 million.

Cleveland Heights High School recently completed a major two-year renovation, costing $104 million. The renovation was funded by a $134.8 million dollar bond, which also helps fund renovations of other school buildings in their district.

While renovations were underway, CHHS students were relocated to Wiley Middle School. Additional wings were added to the building to accommodate the 1,803 students during the 2015-16 school year. The Wiley building was not in use  prior to the high school students being moved there.

Cleveland Heights sophomore Brayden Kellner said that a major advantage of the new high school was space. “Getting to classes is easier, and the hallways are less crowded and a lot of the classrooms feel much more open,” he said.

School Board President Alex Liston Dykema said, “We will still need to address the middle school, but I think we need to do it with more communication and hopefully more private funding.”

The board decided to lower the bond issue to $30 million to be spent on maintenance, repairs, electrical and technological infrastructure, and health and safety concerns. The money could also be used on capital projects in the future. The board is currently deciding which specific projects to use the bond money for.

Shaker’s last bond issue was $23.5 million dollars and was approved by voters in 2004. Those funds were used to maintain school buildings.

Shaker resident and parent Milena Sterio approves of the tax increase. “Although nobody likes to have their taxes increased, I believe it is our responsibility as citizens of Shaker Heights to contribute to our schools,” she said. “Our facilities are adequate, but not luxurious by any means. I don’t think it’s too much to ask to have our students work under non-leaking roofs!”

Sterio said that while she is disappointed the middle school building is staying, she has confidence in the school board’s decision.

So, how important is the condition of a school building to the learning environment that it fosters? “Staff has expressed challenges associated with splitting the same grade level teachers and students around the [middle school] building. The building also lacks large spaces for maker lab courses, is not ADA (Americans with Disabilities Act) compliant for those with physical challenges, and lacks the air conditioning that the building’s design called for to produce a comfortable learning environment,” the Board stated on Aug. 18, 2016.

Middle school health and physical education teacher Beth Casey said, “I think it’s disappointing that the district is not building a new middle school. The current design, coupled with the age of much of the machinery, is problematic in many ways.”

Casey had ceiling leaks in her classroom and said that this affected the learning environment, “There was a definite odor in the room and some kids were just genuinely distracted by it.”

Due to leaks and water damage, the district spent $1.56 million to replace parts of the middle school’s roof over the summer.

Last year, the cafeteria ceiling of the middle school had to be fitted with a makeshift tarp and buckets used to catch leaking water. While taking a standardized test last year, freshman Elizabeth Auten was hit in the head by a falling ceiling tile and suffered a minor concussion.

Auten said poor building conditions have affected school pride and the school’s reputation. “People complain about the middle school and other people are like, ‘Ugh, that’s a terrible school. Why would you go there?’” she said.

Freshman Izzy Nace, who attended the middle school last year, agrees. “It doesn’t help school pride in the slightest when anyone walks in and sees broken tiles and water damaged walls,” she said. “This gives visitors the wrong idea of how Shaker runs the conditions that kids learn in.”

The middle school isn’t the only school building that presents a challenging environment. High school math teacher Jayce Bailey said that heat can be troublesome during the school day.

“Sometimes the heat in the rooms is unbearable,” Bailey said.

Classrooms in the high school’s front hallways remain so hot during the winter that teachers open windows to allow heat to escape and frigid air to enter. With school beginning earlier in the summer, third floor classrooms have grown so hot during August that the district has begun to offer students bottled water.

Bailey said, “As an adult and teacher, I work through it, but I do understand the difficulties that students face.”