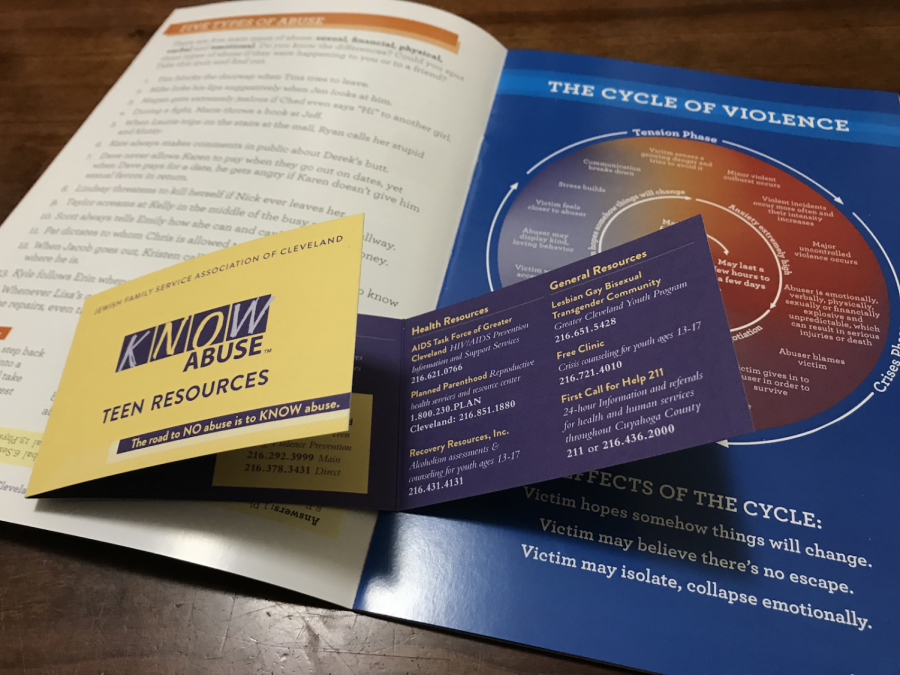 Students received pamphlets that included guides to healthy relationships and to recognizing warning signs for an abusive relationship. “I would hope that if people see abuse that they would speak up or tell someone," said freshman Tahsja Jackson.

Following the Know Abuse assembly presented to freshmen on Wednesday, students are struck by the widespread abuse within teenage relationships and the rarity of discussion on the subject.

“Abuse is a really common thing that not many people talk about,” freshman Naomi Reizes said.

The annual assembly included both a performance and peer-led discussion in classrooms. The performance exemplified the many types of abuse: physical, verbal, emotional, spiritual, financial and sexual.

“I always knew there was physical, verbal and emotional abuse, but there are so many other types I would have never thought to look for. Now I’m going to look to see anything,” freshman Andrea Harrison said.

The theme of the assembly was serious, but it captured students’ attention. In one situation, the abuser led the victim into a forest and attacked her, resulting in her death.

Although the assembly was “very gloomy, it needed to be said to raise more awareness about the horrible thing that’s happening,” freshman Audrey Bernard said.

The performance presented the stories of different couples, sometimes including their friends’ insights, and sometimes not. It traveled through both the victims’ and abusers’ experiences with the cycle of abuse, including scenes in which the abuse was acted out, monologues of character thoughts and statistics stated by the actors on stage together. The performance included representation of LGBTQ+ students and minorities.

Misconceptions were detailed in a pamphlet distributed after the performance. For example, although drugs and alcohol are not always the direct cause of abuse, they can make abusive situations more severe —  and girls who dress in revealing clothing are not asking to be touched.

Jackson said “some of the stuff” the performance included was surprising to hear in an assembly. She did not expect to see a depiction of a boy forcing a girl to do something she didn’t want to do.

Bernard echoed this feeling. “This is happening, and it’s kind of terrifying,” she said.

Although the assembly seemed to affect most students, Reizes remains skeptical about whether or not a person who is a victim of dating violence would turn to the resources given. She said that unless somebody is desperate to get out of a relationship, they will not turn to the hotlines or try to go to other resource centers.

Bernard thinks even if friends of the victim are worried, they will not be upstanders in certain situations where the person is being abused, no matter what is happening.

During the discussion that followed in classrooms, students received pamphlets that included guides to healthy relationships and to recognizing warning signs for an abusive relationship. The pamphlet also included a small notecard listing hotlines for local services such as the Westhaven Youth Shelter & Crisis Counseling and Cleveland Rape Crisis Center, as well as to resources such as Planned Parenthood or The Free Clinic.

Around 15 males asked to be interviewed declined to comment.

Jackson said, “I would hope that if people see abuse that they would speak up or tell someone.”