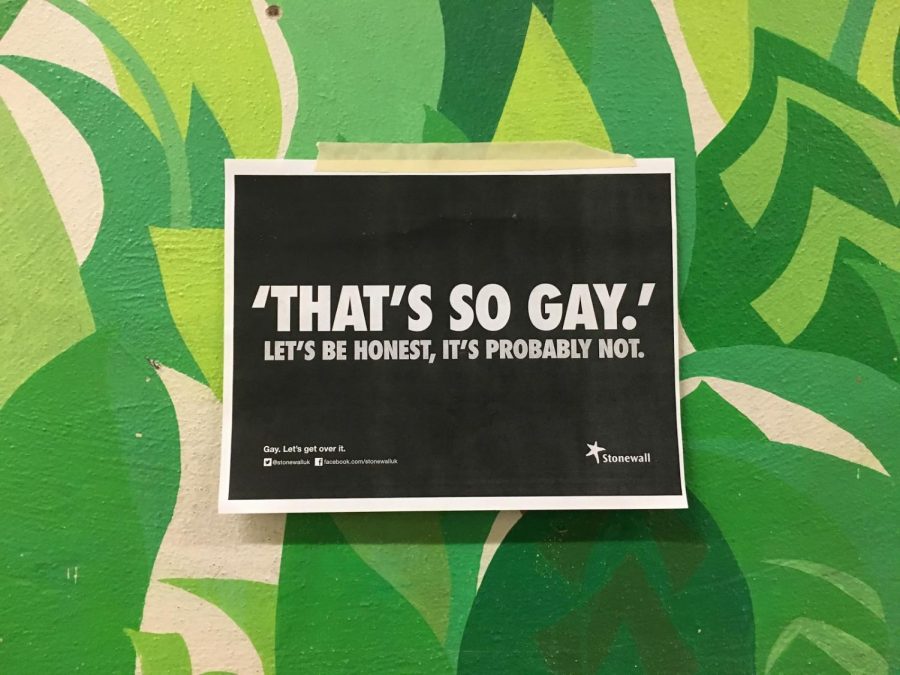 Posters were put up by the GSA to challenge the usage of homophobic language in the school. “I don’t think people understand that making a joke -- saying, ‘You’re gay!’ -- is homophobic,” junior Claire Burchmore said.

Let’s be honest: It’s probably not.

For years, students have used homophobic slurs to insult and bully other students. These words can be offensive and hurtful, and even with the increased acceptance of LGBTQ people, students continue to use them.

They use them so frequently that signs bearing the two sentences — and other challenges to anti-gay language — appeared throughout the high school last month, posted by the Gender and Sexualities Alliance.

Most students hear homophobic slurs almost every day, but most of them don’t try to stop students who use them. Part of the reason is because students are afraid that they will be called a homophobic slur instead. “Most of the time, if you do say something to someone you don’t know, they end up verbally attacking you,” junior Connor Covert said.

Some students said that they don’t try to stop other students in class or in the halls because it’s more difficult to take their concern to a teacher or an administrator. “It gets to the point where, if you stop people, it gets more stressful for yourself to go to a teacher, tell them why what [students are] calling you is bad, and all that stuff,” sophomore Jade Orazi said.

Science teacher Megan Dora said she tries to draw attention to homophobic language and tries to stop it, but hasn’t gone as far as to explain why the words are unacceptable.

A lot of students don’t realize that what they’re saying is offensive. “I don’t think people understand that making a joke — saying, ‘You’re gay!’ — is homophobic,” junior Claire Burchmore said.

“You’re referring to gay people as a word and using it as an insult, the way someone would use the word stupid, which is sending a message that it’s not OK to be gay. And, when someone says it’s not OK to be gay, well that’s textbook homophobia,” freshman Aine Jameson wrote in a text message.

On Nov. 1, the Genders and Sexualities Alliance put up three posters throughout the building challenging the usage of homophobic language, including the one that stated, “‘That’s so gay.’ Let’s be honest, it’s probably not.”

“The goal of the posters was to kickstart the conversation surrounding this issue,” said GSA president Sarah Grube. “The very fact that the event occurred, and that people talked about it, means we achieved our goal.”

“I think I heard students. They definitely noticed them — how much they internalized it though, I don’t know,” Dora said.

How will students realize that their homophobic language is hurtful and harmful? For a lot of LGBT students, words such as gay or other derogatory terms have a meaning and a history, but for non-LGBT identifying students, those words might have less power.

“I feel like gay, or [fag], or any really taboo or edgy word — Eventually they lose their ‘umph’ for straight people because they get used to using it,” freshman David Pilkington said.

Grube didn’t attend Shaker Middle School, but at her previous school, she experienced homophobia. “In the locker room, there was this girl who would gather everyone around, and announce that she knew who in our grade was a lesbian. Then she’d list people who ‘set off her gaydar,’ and those people would be giggled about and laughed about for the next few days,” Grube said. “For someone who knew she was not straight at the time, to hear my identity be thrown around in a negative way was pretty damaging and hurtful.”

“And it’s that same feeling that persists when you hear someone use a slur — you get a sinking feeling in your stomach, and your whole body tenses up, and there’s this moment of panic and ‘oh s–t’ where you’re not sure who they’re referring to,” Grube said.

According to the Gay, Lesbian & Straight Education Network’s 2015 National School Climate Survey, “Almost all of LGBTQ students (98.1 percent) heard ‘gay’ used in a negative way (e.g., ‘that’s so gay’) at school; 67.4 percent heard these remarks frequently or often, and 93.4 percent reported that they felt distressed because of this language.”

While a lot of students don’t take the usage of homophobic language seriously, the survey stated “57.6 percent of LGBTQ students felt unsafe at school because of their sexual orientation, and 43.3 percent because of their gender expression,” and “31.8 percent of LGBTQ students missed at least one entire day of school in the past month because they felt unsafe or uncomfortable, and a tenth (10 percent ) missed four or more days in the past month.”

Although homophobic language is common at the high school, seven of 10 GSA students said it was worse at the middle school. “I feel like one of the big reasons why it’s so rough at the middle school is because people are younger, so fewer people come out. So the people who do come out are magnified. I came out in seventh grade, and by the end of eighth grade I was known as ‘the [transgender] kid,’” Orazi said.

Beth Casey teaches health at the middle school. “I do not know for sure if homophobia is worse at SMS compared the SHHS because I am only at SMS, but I would imagine that because of a limited amount of maturity in our building that it is most likely worse,” she stated in an email. “This age group can be very hard on each other, and using slurs is one way to humiliate and embarrass people in a very personal way, especially among the boys.”

Said Grube, “In the end, you just feel unsafe and hurt and uncomfortable, and if it happens over and over, it makes the environment itself feel unsafe.”