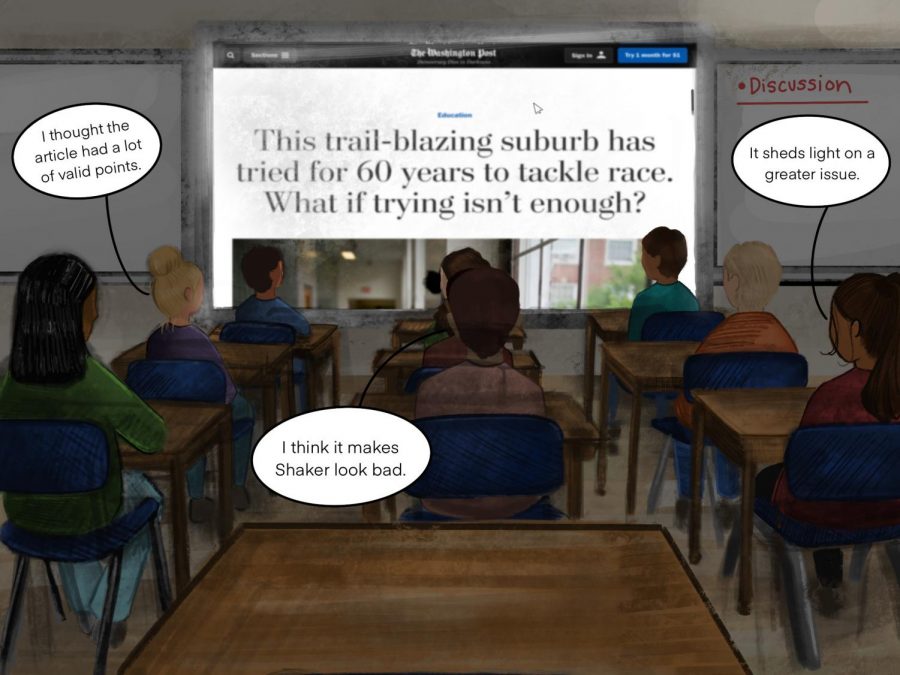 “What if trying isn’t enough?”

That question concluded the headline for an Oct. 11 Washington Post story about Shaker’s efforts to solve racial inequity in education. “This trail-blazing suburb has tried for 60 years to tackle race,” the headline declared.

The story, by SHHS alumna Laura Meckler, details distressing events of last year, including the angry Nov. 8 community meeting and the district’s actions in response to a parent’s complaint about English teacher Jody Podl, which an arbitrator ruled violated due process. The story also addresses Shaker Heights’ historical commitment to integration, the district’s efforts to achieve equity, and the hurdles that remain.

So, is trying to fix racial inequity enough?

“I feel like it’s at least an effort. Many other schools just ignore it. At least Shaker is trying to close the achievement gap and help students succeed,” sophomore Leela Khatri said.

History teacher Paul Kelly said the question is too difficult to answer directly. “That’s an ambiguous question. Of course teachers are trying, but we won’t show up at their house, and we can’t remedy some childhood trauma, so it’s a loaded question,” he said.

He said, “When we have blended classes that look like the Shaker community, that will be enough.”

Sophomore India Williams, an African-American student, said that trying is not enough. “Trying isn’t the same as doing,” Williams said. “If they did really want to close this achievement gap, then they would have done something earlier.” She described the separation of math classes in third grade. “They could encourage everyone to try to go into the advanced math, or just combine both classes,” she said.

“I think it is enough and not enough at the same time, because there’s so much more that we should be doing to solve the achievement gap,” said Paige Masterson, who is white. “I don’t know exactly what we could be doing to do that, since it’s such a complicated thing, and since it’s been ingrained into our society since America started as a nation. I think Shaker has been doing efforts to solve that, but not enough to really make that final step, and I don’t know what that would be to really close the achievement gap.”

Junior James Kennedy, a white student, said that Shaker has been making an extra effort to help reduce the gap, but that is not where the issue starts and stops. “It begins the second people are born. The racial wage gap is definitely a leading factor in how motivated people are from a young age. Shaker is separated by neighborhoods, and I think that no matter how hard the high school tries to tackle these issues, they will go on for many years,” he said. “The fact that our generation is addressing this as a problem now, is more than almost any other generations can say, and that is a step in the right direction.”

Sophomore Isaiah Kyremes-Parks, a multiracial student of white, hispanic, and American Indian descent, thinks that the achievement gap is the most important problem for Shaker to work on. “With encouraging the gap to lessen comes less self segregation and further integration,” he said. “Within Shaker, there are programs, like Bridges, which form an outside point of view and seem to be actively working towards narrowing the gap. Beyond the achievement gap, there are a number of other issues to work through, but I personally believe that within the context of school, the achievement gap is possibly the best place to work at now.”

Senior Carissa Kieger, who is white and of Thai descent, said that there could be more action taken to decrease the achievement gap. “I believe that trying to solve the achievement gap is enough because an attempt at creating more quality within the school system is more valuable than no attempt at all,” she said. “A proper solution might take longer time than expected, However, 60 years seems drawn out. If the Shaker Heights school system is able to provide evidence of improvement or a plan of action for the near future, I would be able to say in full confidence that the efforts are enough.”

Junior Jaden Griffin, an African-American student, does not think that simply trying to bridge the achievement gap is enough and would like to see more diversity on the school board as well as in city council. “Trying to bridge the achievement gap is not enough, we’ve been doing that for 60 years, and there really hasn’t been a change. I personally believe that there should be some committee put in place to focus on this specific topic,” he said. “There needs to be more people of minorities on the school board, and in city council to help with this problem.”

Senior Natalie Green, a white and African-American student, thinks that trying is enough because that is the only way to move forward in solving problems. However, “trying” to her has a negative implication as it seems too final. “It’s not like we’ve been trying to solve this disparity for 60 years, but we haven’t seen change because we aren’t being persistent, or trying enough. The achievement gap widens throughout a students’ education, especially at Shaker where getting older means choosing to take more difficult classes, and try all you want to get minority students to take those classes — no really, please try — but perhaps if we focus on initiatives to give each student an equal opportunity to succeed as soon as soon as they arrive to Shaker we’d notice the gap shrink,” said Green. She said that people need to try being aware of each others’ differences and how they divide us.

During a Nov. 18 meeting organized by the Student Group on Race Relations, approximately 80 community members discussed the achievement gap and the Post article at the Stephanie Tubbs Jones Community Building.

Angela Chapman (’81), attended. She said that if Shaker’s efforts were enough,  fewer people would be trying to fix the district. Chapman said Shaker needs to work on fixing the schools from the top, through reforms placed by the board of education, as well as from the bottom, through the efforts of individual teachers.

She said that the district should revise tracking. She said, “I think that levels have their place in high school, but not before. We need to appreciate everyone, on every level.”