To Know What Diversity is, Try Listening 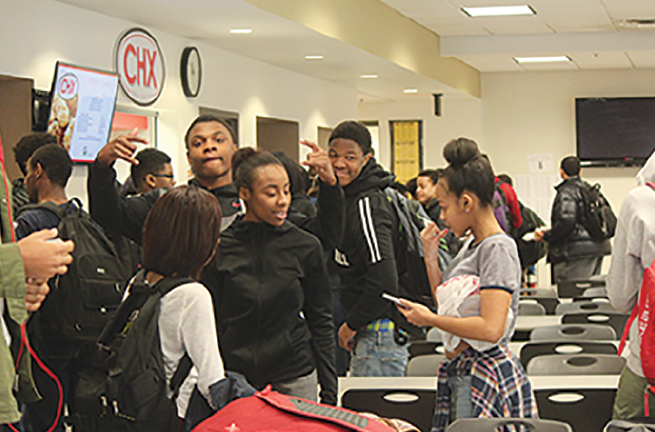 There are so many people at Shaker, you can surround yourself with versions of yourself, or people completely different than you. Fourth period lunch displays the lack of racial intergration at Shaker Heights High School. Though the demographic of the school is varied, the groups in the lunch room are not.

By now, I might have worn out my diversity credentials, but I’m not done talking about diversity.

During the course of this investigation, I received a text message from a student whom I will call Person X, who criticized the effort. “I’m a white, straight, Catholic who’s conservative, and to me, it feels like I’m the minority in most ways BECAUSE of how different Shaker is from most places, with our strong black and Jewish ties, as well as huge LGBT community,” the student stated.

As my conversation with Person X progressed, they suggested The Shakerite adjust the demographic of students we interview to better encompass Shaker’s diversity.

I found it interesting, because I am not white, straight, Catholic or conservative — and I still feel like a minority at this school. I thought about this for awhile and came up with a possible reason why. Because there are so many people at Shaker, you can surround yourself with versions of yourself, or people completely different than you. If I wanted to, I could hang out with only African Americans, or only females or only people in the LGBT community. I might have an easier time explaining where I’m coming from, but I would be missing out on diversity of thought.

I may have completely misinterpreted what Person X meant, but at least we’re both thinking.

The essential difference I realized when thinking about minority status at the high school was, when Person X and I leave the Shaker Bubble, I’m the one who will still be a minority.

When I realized this, I was frustrated. In school, the majority of the African-American history I’ve learned thus far can be boiled down to two ideas: slavery and the civil rights movement, and if we’ve studied LGBT history, I genuinely cannot remember doing so. When I received that text, I remember thinking, ‘Who is this kid and where are they even coming from?’

Then I thought about it. Shaker is better than most places. I have a large group of people I can talk to about minority issues. I can attend Sankofa every year and watch passionate kids portray African-American history. I don’t feel uncomfortable taking a girl to a school dance. I know out gay teachers to whom I can look to as role models. Is Shaker perfect? No, it is but extremely accepting and welcoming.

If people who would be considered the United States’ typical majority are coming out of Shaker understanding even modestly how minority individuals feel, we are one step closer to creating more inclusive environments.

In my SGORR group this year, my leader — who just so happens to be a straight, Caucasian male — is the one leading discussions on race and LGBT topics. It’s refreshing to see people who aren’t directly affected by these issues attempting to bridge the knowledge gap.

My English teacher has gone above and beyond to make his classroom a safe space for all students. During our conversations in the women’s studies unit, he always ensures that African-American and LGBT voices are represented in the texts we read and he allows the students to critique work and share their own perspectives.

Because of the heterogeneous environment Shaker cultivates, when students leave, they take with them an understanding of backgrounds other than their own. So even in homogeneous colleges and suburbs, with Shaker alumni present, we can bring perspective wherever we go.

After months of thinking about diversity, I’m confused, but I think that’s a good thing. This series is just the beginning of how we could define Shaker’s diversity — and general diversity for that matter.

The most compelling lesson I’ve learned from investigating diversity this year is that sometimes, two-way conversations are not the most effective way learn something that challenges from your school of thought. Sometimes, it is helpful to just listen. Inviting different groups of people to share their experiences and opinions about our school’s grasp of diversity can be more illuminating than trying to explain — or more commonly defend — where you are coming from.

Listening to students address going to school on religious holidays and the challenges they face with bathroom access not only refocused my view of our school, it taught me that people will reveal deeply personal experiences and feelings when given the chance. In most cases, the people we interviewed were happy to share their stories and glad someone was asking for their perspective.

In my experiences this year, some of the most frustrating conversations I’ve had surrounding race were frustrating because even though I was allowed to speak, I didn’t always feel heard. When you have two-way conversations, people’s own discomfort often makes them more focused on what they want to say next, rather than processing the different perspectives being shared. When you take that pressure away, more progress can be achieved.

I learned more by listening than I would have by trying to interject my own opinions.

As for the person who texted me in the first place, I really appreciate the effort and the message. First because it means someone cared enough to want the Shaker community to see everything our school has to offer, but also because it prompted my own self reflection.

I have gained perspective from the people I interviewed, but what Person X brought to my attention is arguably just as important. Here at Shaker, the nation’s majority isn’t always the majority. From where I stand, it’s hard to always see that, but considering it creates an opportunity to learn how to appeal to people whose identities are privileged in the real world.

I hope that people take the same message from this investigation: sometimes it’s OK to just listen.