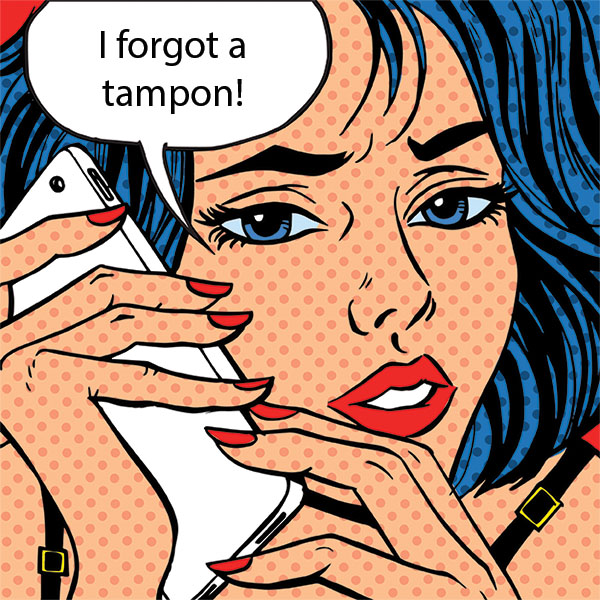 High school health teacher Kendra Agee-Barney teaches about menstruation in her classes. “There’s still a stigma, because people don’t want to talk about it,” she said. “Boys still don’t want to hear about it. You still hear the same jokes.”

The girl shifted in her seat, adjusting her shorts. Anxiously anticipating the worst, she reached for her phone.

It was September–she knew that much–but when her screen displayed the date, she felt a sinking feeling. Her period had come two days early, just as she had dreaded. Opening one of the group chats on her phone, she sent the text: Does anybody have a tampon? After five minutes passed with no answer, she gave up.

Hoping that her teacher would be lenient, she raised her hand. “May I go to the nurse?” She was prepared to give an excuse–her stomach hurt, or she had a headache.

Luckily, she was given a pass without question, but as she walked down the hallway she resisted the urge to hide from those she passed. Though she assured herself that no one would notice, or care, she couldn’t help but feel the opposite. It was hard to miss a dark red spot on someone’s pants.

She opened the door to the nurse’s office, surreptitiously grabbed a tampon and headed to the restroom. As she entered the stall, she felt herself able to breath again. Safe.

With females comprising more than half of Shaker Heights High School’s population, occurrences like this are not uncommon. For those who get their period, blood and tissue is discharged from their uterus for about seven days each month.

“Sometimes I don’t have supplies and I don’t want to have to go down to the nurse’s office, and I’m just worried thinking about it,” freshman Lora Clarke said. “Is it going to bleed through my pants? What’s going to happen?”

According to the American Congress of Obstetricians and Gynecologists, the average female in a developed country first gets her period between age 12 and 13. In the Shaker Heights City School District, males and females learn about their health in fifth, seventh and tenth grade, and although each year covers slightly different topics than the year prior, periods are touched upon.

Kendra Agee-Barney, the high school health teacher, agreed. “I always tell the students that it’s important to know the way things are supposed to be, so that you know when something is wrong,” she said.

Though students are split by gender in fifth grade, their high school health classes are coed. Changes made two years ago to middle school curriculum reinstated coed health classes, and students now learn the curriculum over the course of a quarter.

However, said Agee-Barney, most kids at the high school do not take her health class. Instead, they follow the online curriculum supplied by Brigham Young University. Online health does not cover menstruation, and it follows the university’s abstinence-only guidelines; students at BYU sign an honor code foregoing extramarital sex.

The lack of in-class instruction is visible in her classes, said Agee-Barney. “I would say that the boys are less educated, but the level of understanding is pretty low across the board. There are many girls who have periods who don’t understand why.”

English teacher James Casale sees the lack of education as well. “I think in terms of students’ maturity, their understanding of sex and sexuality is severely hampered,” he said.

Casale believes, however, that schools have improved education on menstruation. While he took health in the classroom at his high school, he said the subject was rarely discussed. “In terms of its impact on me, I would say at times it made one reticent of the female body,” he said. “I ended up learning about it from my sisters, and then through college and female friends.”

Freshman Caitlyn Shelley experiences the reticence firsthand. “Guys feel like they’re not supposed to ask about it,” she said. “Some guys try to ask, ‘What does it feel like?’ but it’s not something you can really describe.”

Senior Dylan Freeman said he knew little about periods when he was younger. “I think just the whole idea of bleeding throws people who don’t experience that off,” he said, “but when you actually take the time to think about what’s going on–how is it girls’ fault that they have to go through all that? It’s a natural thing.”

While Casey agrees that the messy nature of menstruation contributes to such hesitance, she also sees something more. “It’s just something that was perpetuated generation after generation,” she said. “The media kind of helped with the stigma, but it also kind of perpetuated it–making jokes about it, in movies and stuff like that.”

TV shows, movies and books may talk about menstruation, bringing it into the spotlight, but the media can also portray periods in a negative light, hindering any efforts to make it a more prominent topic of conversation.

“There’s still a stigma, because people don’t want to talk about it,” said Agee-Barney. “Boys still don’t want to hear about it. You still hear the same jokes.”

In Casale’s experience, conversation is the catalyst for change. “The more you talk about something, the more you demystify it–the more it becomes something approachable,” he said.

Casey believes that education is key, and while she believes Shaker has a good curriculum, she also encourages a knowledge base at home. “If it’s talked about at home, they’re definitely more comfortable,” she said.

As for the classroom, Casale thinks that teachers have an opportunity to prompt discussion. “There’s always opportunity in the classroom to talk about the body,” he said. “We see it in literature, and definitely in science classrooms.”

Overall, said history teacher Bryan Elsaesser, “There are still girls who think that there’s something wrong, or they’re embarrassed by it, and that’s not something you should be embarrassed by.”

A version of this article appears in print on page 10 of Volume 87, Issue 4, published May 5, 2017. Accompanying it was “My Body is Not Your Excuse,” by columnist Hannah Kornblut.