Male, Female or None of the Above? 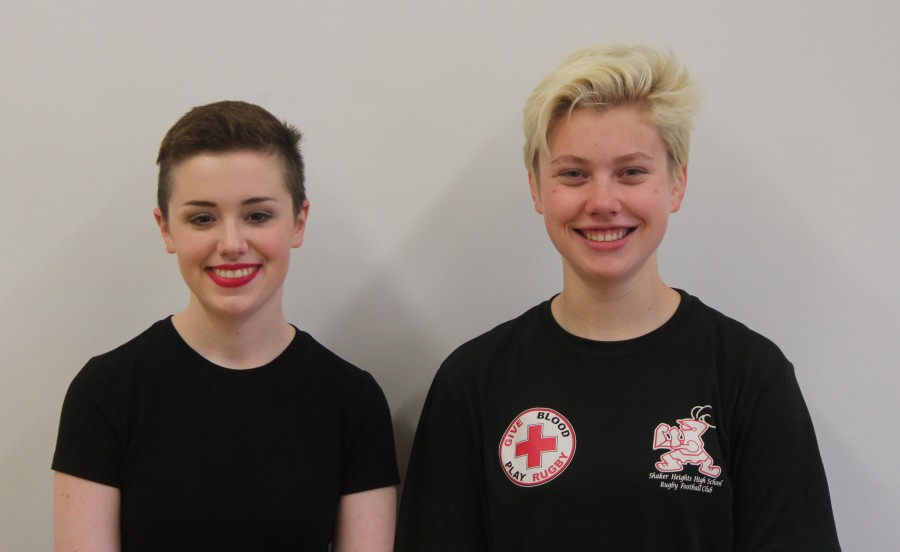 From left to right, senior Martha Jackson and junior Sheila Scanlon both identify outside of the gender binary. (Not identifying as either male or female)

For more information on this topic before reading the story visit The Human Rights Campaign’s website.

Define what gender identity is to you.

Martha Jackson: “Your gender is how you feel on the feminine-masculine spectrum, essentially. Whether you feel completely masculine or completely feminine, or you don’t feel like you’re either. There are endless possibilities.”

Can you define your specific gender identity?

Martha Jackson: “So my gender identity has kind of varied among my high school years. Like, freshman year I was very sure that I was a girl. My sophomore year, I also came out as gay and I dressed very, very masculinely and I think that was the point that I realized that I don’t know what was going on with myself. Junior year I came out as genderfluid because I felt like I flowed in the masculine and feminine spectrum, and that’s what I was for a while, up until a point this year when I noticed that I felt more feminine so I decided to come out as a non-binary, fem person. Which basically means that I don’t identity as a boy or girl but I identify more with the feminine side rather than the masculine side.”

Do you find other students and members of the Shaker community inclusive or ignorant of the topic of gender identity at the high school?

Martha Jackson: “It kinda depends, because, I mean, most people who I’m friends with are very supportive of me, and that’s not to say that no one else is supportive, it’s just not talked about. I don’t think I can think of one classroom conversation I’ve had about gender. If I were doing a science experiment, like, ‘Oh how many boys, how many girls,’ it doesn’t bother me that much. It’s just I still wish it could be where everyone would know about it. As far as people being accepting and stuff, it’s been nothing but inclusive. Shaker’s program is not, they’re just not hip to the terms, if you know what I mean.”

Sheila Scanlon: “Everyone is pretty cool about it. Even though my pronouns are on my Instagram and I put my pronouns everywhere, people still don’t really use them. A lot of my friends do, but it’s still not all of my friends. I have group chats with different IB students or whatever, and some of them use my pronouns, but not all of them. I haven’t really had conversations with people about my gender. I am in Theory of Knowledge and I do wanna try and bring it up this year because it is a knowledge-ish topic. It would be a good discussion for a lot of classes for Shaker. But I just don’t think it’s brought up enough.”

Martha Jackson: I am going to say that Mario Clopton, our choir director, has from day one been open and accepting and has said, ‘Hey listen, guys, you are gonna respect everyone’s pronouns, this is a safe environment for LGBT kids,’ because he’s an openly out LGBT man, and from day one he has always used my pronouns in choir, and I find that to be very, very respectful.

Do you think the LGBT community gravitates together too much? Do you think that the community is potentially – although not on purpose – isolating itself from the rest of Shaker?

Do you find that your Shaker experiences are affected by your gender identity?

Martha Jackson: I don’t really think it does. You tell them your pronouns, and they are typically very open to it. It certainly doesn’t affect any of the activity I’ve been in, the like stuff with theater, with choir and orchestra and the music program and stuff like that. I don’t think it’s affected me.

Sheila Scanlon: “I feel like it sort of affects mine because I’m involved in GSA. I do outside things with gay people. From my freshman year, I was a part of the jump start team with the Gay Lesbian Straight Education Network, GLSEN, and the president of GSA at that time, Lucy Richman. And we met like once a month with representatives from GLSEN,  and we talked about how to make our GSA the best it could be. I still go to the GLSEN conferences. I go to the LGBT center.”

Is Shaker doing anything that make the school environment more welcoming and accepting?

Martha Jackson: Other than Mr. Clopton, I would say no. He’s the only teacher I’ve experienced who’s come forward and said all gender identities are welcome and we’re gonna respect everybody, and the only teacher who openly asked what people’s pronouns are and then used them. As far as I’m concerned, none of my other teachers have ever asked what anybody’s pronouns are. Like we’ve never had a conversation about gender. If we’re doing some self project, and it’s like at the beginning of the year, and it’s just, like, “Tell us about yourself,” I would say my gender identity. No one would say anything about it, but no one used my pronouns other than the people who know me pretty well. Very few of them use my pronouns very regularly.

Sheila Scanlon: I feel like the teachers could be more — not accepting, because a lot of them are accepting — but they could be a lot more involved. Even just, every teacher has like a getting-to-know-you sheet at the beginning of the year; just put your pronouns on there. Put a space for gender pronouns, just have a space. Then if somebody’s confused, then explain. She-her-hers, he-him-his, they-them-theirs. You could even have that underneath as, like, an example. And the people who use pronouns other than those three would know to put their pronouns down. So I also feel like it’s hard when you’re non-binary because, like, what bathroom do you use? I use the women’s restrooms, because the other alternative would be to go to the nurse every time I want to go to the bathroom. I need to go to the bathroom too many times in the day to go down to the nurse’s office every single time. And if you’re trans you can get, like, I think it’s called a permanent pass, to go down to the nurse’s office to go to the bathroom. So there’s that. That singles us out; we have to go to the nurse. We have to go do this, or whatever. I’ve heard things about a gender- neutral bathroom, and I’ve asked questions, but there isn’t one in the school, and there’s no gender-neutral locker rooms, which is a little different, because you are changing, but it’s still a problem. I’ve heard talk that there might be a gender-neutral bathroom in the future. I’m not sure how that will play out.

What can Shaker do to make your make your experiences better?

Martha Jackson: Like Sheila said, just starting off asking people their pronouns and what their gender is because it’s so nice to be asked. It’s a very nice feeling to know that people care. Like I said, I’m not going to be mad if anyone assumes I’m a girl, but it’s a really nice feeling to have someone ask you what your pronouns are and use them. It’s one of the nicest feelings in the world, to be honest. I think Shaker is tolerant and I think they definitely are open to this, but we’re just not there yet. I don’t mean to be rude, but we have a lot of old teachers at this school who are old- fashioned, and who aren’t really up to date with that kind of thing. And I think that it’s just that Shaker needs to be educated.

Sheila Scanlon: Yeah. I think a lot of it has to do with lack of education. It’s not the teachers’ fault. It’s not like a newer issue, because there have been trans people, but it’s more vital, and non-binary is a newer thing. It wasn’t taught to them. There probably weren’t “out” trans people in their schools. So it’s not the teacher’s fault that they don’t know these things. You know we can take steps so they do know: I should ask pronouns, I shouldn’t assume gender identities, things like that. I think Shaker is pretty open and tolerant but it’s still not everyone. A lot of people still have misconceptions and stereotypes and they still have a negative view of trans and gay people. Even if it’s not an expressed hatred, it’s still bias, a negative connotation. I know even in an advanced English class, a bunch of people came into my math class after that, and there is still a person there who uses the term dyke, which is a slur for gay women. And there’s still a lot of intolerance in the school, but it’s not always expressed. Not intentional, but not realizing they’re being offensive. And that’s partially education because you still need to educate people about these things.