In the Wake of Administrative Leave

Following the district’s investigation of a teacher for “bullying and harassment,” faculty report feeling uneasy, but students surveyed say they have not noticed a change 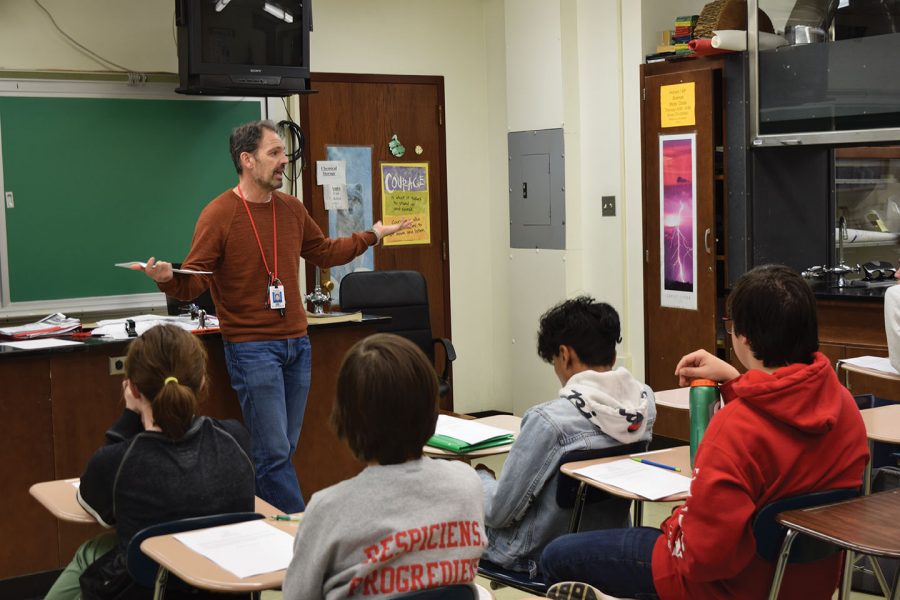 Science teacher John O’Verko said each year he interacts with his students differently based on their personalities.

Because of the district’s investigation of English teacher Jody Podl, teachers feel there is more tension in the classroom and find themselves filtering their actions and comments.

However, responses to a Shakerite survey suggest students are not aware of teachers’ feelings and have not noticed changes in their relationships.

Podl was placed on administrative leave Oct. 10 while the administration conducted an investigation into claims of bullying, harassment and intimidation and separate discrimination claims. Students, parents and teachers were informed of the decision via email from former Principal Jonathan Kuehnle Oct. 19. The district found no evidence of discrimination, but Dr. Terri Breeden, assistant superintendent of curriculum and instruction, declared that the other claims were valid and disciplined Podl. The Shaker Heights Teachers’ Association protested that Breeden acted without allowing Podl to see the complaints Breeden cited or respond to the claims.

The SHTA then filed a grievance with the district Nov. 8 on the basis of academic freedom, communication and the lack of due process for Podl. The grievance was the association’s first over due process.

On Nov. 30, after failing to resolve the grievance, the district entered arbitration with the SHTA. Under arbitration, a third party is brought in to settle a dispute.

On Nov. 14, Morris read a prepared statement during the public comment period of a Board of Education meeting.

“I’ve heard discussions over the last 48 hours that have compelled me to speak. And those discussions have been about a perceived ‘us versus them’ mentality [teachers versus students]  portrayed about the [SHTA],” he said.

In a Feb. 11 email message to students, staff and parents, Interim Superintendent Stephen Wilkins announced that the district withdrew disciplinary action against Podl. In an April 22 ruling, the arbitrator declared that the district violated due process and disciplined Podl “without just cause.”

To explore the impact of these events, The Shakerite created an anonymous Google survey asking students how they view their relationships with teachers. It was sent via email to all English teachers, who were encouraged to administer it to their students. The survey was available from Feb. 25 to March 4.

Survey responses suggest students noticed a correlation between the strength of student-teacher relationships and their grade level. The more time students spent in the high school, the stronger their relationships with teachers grew.

“I think my teachers this year are more open to discussing grades and personal life and what not, whereas freshman year it felt like there was a more strict approach to casual conversation in some cases but two or three teachers who respected chatting,” one survey respondent wrote. “This year I feel more comfortable talking to every one of my teachers.”

Senior Kaela Ruffin echoed those feelings in an interview. “I think most of the things teachers tell me, they try to get me to grow as a person, and now the teachers I had freshman year, the things they said freshman year, make sense now that I am a senior,” she said. “So it’s like they are here to help.”

At the same Nov. 14 board meeting, English teacher Aimee Grey questioned the impact of the decision to place Podl on leave based on a student’s complaint. Grey said,

“If teachers are uncertain about exactly what kinds of situations merit removal, we begin to ask questions about when we might be put on administrative leave: If I give a grade a student doesn’t like? If a student disagrees with me? If a parent or student is frustrated with me?”

Grey continued, “If teachers feel unsupported and uncertain, that will impact their effectiveness, because they will be forced to second-guess every decision.”

According to Ohio Revised Code 124.388, administrative leave is “to be used only in circumstances where the health or safety of an employee or of any person or property entrusted to the employee’s care could be adversely affected.” This means a school employee can be ordered to stay home if school leaders believe that their presence in the school could negatively affect their own health or the safety or health of others.

Sophomore Colin McCabe said that during the time Podl was on leave, one of his teachers expressed fear of being reprimanded for giving students a bad grade.

In an interview, Morris echoed Grey’s concern about how teachers could be affected. He said teachers feel they cannot be as challenging or open with criticism as they once were because they are worried about how students and the administration might perceive their grading and teaching policies. He thought students could sense discomfort in their teachers, leading to a sort of invisible barrier.

He also expressed concern that the administration’s actions against Podl might discourage students from speaking up.

“I think the unintended consequence is that students feel like if they report, if they speak their truth, even though it may be difficult, they may actually jeopardize a student and teacher relationship that they value,” Morris said.

One student surveyed did note a change in student teacher relationships. “Some things are a bit more tense — because the teachers aren’t allowed to tell us what’s going on, even if they have information,” they wrote. “It’s keeping us all in the dark.”

Ruffin said she thinks teachers are now more cautious about how they speak in the classroom and how they conduct themselves.

Math teacher Ray Durban said that, after Podl was placed on leave, “even I, who pride myself on good relationships with students, paused for thought, concern, measured my words a little bit.”

Sophomore Erica Smith said that although teachers have addressed the instances of administrative leave in class, she thinks “there hasn’t been a change in relationships with students.”

Ruffin echoed Smith’s observation. “I feel like there’s no tension. Everything is pretty much the same with all teachers,” she said.

“My relationships with teachers haven’t changed,” another survey responder said. “Although it has been talked about numerous times in my various classes, it doesn’t change my view on my teachers.”

“In some respects, I take that instance as a good reminder. I happen to be a fairly unfiltered teacher at times,” Durban said. “I don’t mean to insult or put students down, but I speak the truth. Sometimes children think there’s certain places and times for the truth, and I respect that.”

Morris said that students may notice a change in their relationships with teachers because “everyone is in kind of a holding pattern until we implement restorative practices. We’re going to do a district-wide school training at the beginning of next school year, so I think after that I would expect students to see restorative circles and restorative practices used for discipline issues.”

Morris said, “The reasons why most students have not seen change is because everyone is in a sort of holding place.” 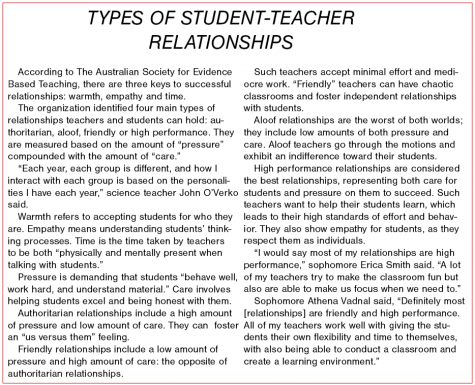