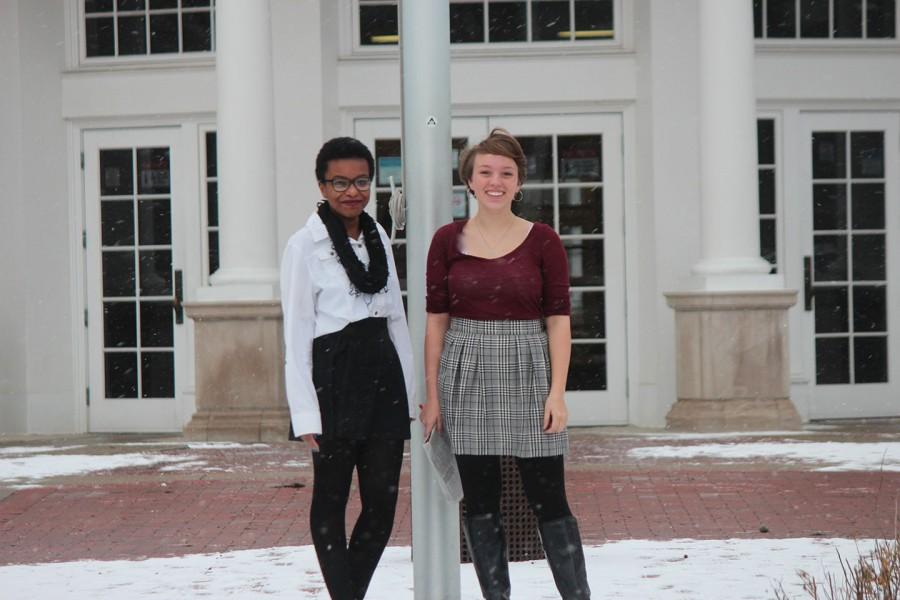 Arheghan (left) and Grube (right) both have personal experiences as LGBT teens at Shaker Heights High School and are sharing their opinions on the culture of the school.

Throughout this year, I have been reporting on diversity in an effort to determine what the term, so vital to Shaker’s identity, really means. I strongly believe that especially at Shaker, diversity spans so much further than race. In an effort to determine how much further our definition of the word could reach, copy editor Sarah Grube and I will interview students whose identities and experiences embody diversity beyond race. To introduce this series, Sarah and I offer the first installment from our perspective.

Has your identity affected your Shaker experience? Positively or negatively? How?

Ose Arheghan: Shaker has given me a wake up call to the fact that even the most accepting places have their issues. I entered the “Shaker bubble,” as it’s often referred to, in the seventh grade. Prior to that I went to school in the South Euclid-Lyndhurst area. Having a parent who graduated from Shaker, I knew the reputation the district has for being an open and inclusive environment. I was excited to be embraced in such an environment, but soon learned that even the land of diversity isn’t all that it’s cracked up to be. I first realized this at the middle school when I had a friend tell me their parents were not comfortable with us being friends because I was dating someone of the same gender. I was under the impression that Shaker was supposed to be an accepting environment, but that encounter has made me hesitant to be myself in a school setting.

Sarah Grube: I am fairly out in terms of how many people know about my sexuality, and the majority of people I am friends with accept my identity. However, I feel that a great majority of the student body is accepting in theory, yet are uncomfortable when the topic is brought up. I have met people whom I made friends with and was later surprised to learn were fairly homophobic when the subject came up. I attended Hathaway Brown in middle school, and one of the more personal factors in my decision to switch was my sexuality. I arrived at Shaker with the idea fixed in my head that the school would be a entirely discrimination-free place, but unfortunately it was not so.

Do you find other students and members of the Shaker community inclusive or ignorant of the LGBT community at the high school?

Ose Arheghan: While I have been put in some uncomfortable positions like the one in middle school, living in Shaker definitely has its upsides. In my experience, the large population of LGBT teens at Shaker makes for both an inclusive and ignorant environment. In having so many LGBT students in one area, we are able to befriend others like ourselves, leaving the rest of the student body out of important conversations. For example, I would find it easier to joke with one of my LGBT friends about how I don’t get the hype surrounding the girl’s choice winter formal because homecoming is girl’s choice in my eyes as well. I find fault on both sides — the minority and majority — because I admit, it can be easier to find refuge with like-minded people, but that is allowing the majority to stay ignorant out of concern for my own comfort.

Sarah Grube: Although the majority of the student body is aware that there are people at school who are LGBT, this often means that not much is done to make sure that our community is as accepting and tolerant as it could be. For example, the use of “gay” as a slur is the first issue that comes to mind, but more subtle instances of discrimination and ignorance are continually present at school. Shaker students may not be oblivious to the presence of the LGBT community, but consciousness does not equate to comfort; an offhand mention of an ex-girlfriend can draw raised eyebrows, awkward coughs and a change of subject. I often find it easier to avoid being drawn into conversations about romance among people who are not my close friends or other members of the LGBT community.

Is Shaker doing anything that is making the school environment more welcoming or accepting?

Ose Arheghan: SGORR recently held a forum in the upper cafeteria after school to discuss LGBT issues. During an individual meeting, my leader encouraged us all to attend. It was refreshing to have my peers encouraging each other to learn more about opinions that differed from their owns.

Sarah Grube: Adding LGBT couples to the Know Abuse script was an instance where members of the larger Shaker community did a good job of making the LGBT community more visible and equating heterosexual relationships with their LGBT counterparts. In addition, the fact that members of the school are allowed to participate in the Day of Silence speaks to the tolerance of the faculty and administration.

What could Shaker do to make your experience better?

Ose Arheghan: The only way to address issues within our school is to make sure people are aware of them. I would like to see not only students, but the entire Shaker community involved in a dialogue to make sure that everyone is truly on the same page. Shaker is a place where you encounter all types of people, and there is not a way to avoid testing your values. In the same way Shaker students are equipped with the tools to have meaningful conversations regarding race, LGBT issues need to be treated in the same regard.

Sarah Grube: I would like to see Shaker discuss LGBT issues with students at the middle school, and maybe set up a GSA there. I remember how difficult it was for me to go through middle school while identifying as LGBT, and I would have really appreciated having a safe space for me to explore my identity and be mentored by older members of the community. In addition, I would like for certain classes to make it easier for LGBT students to participate. For example, language classes were sometimes difficult for me. I take French, and there are few gender-neutral words with which one can describe a romantic partner, and this can make it difficult for students to participate in discussions in class without disclosing their sexual identity.