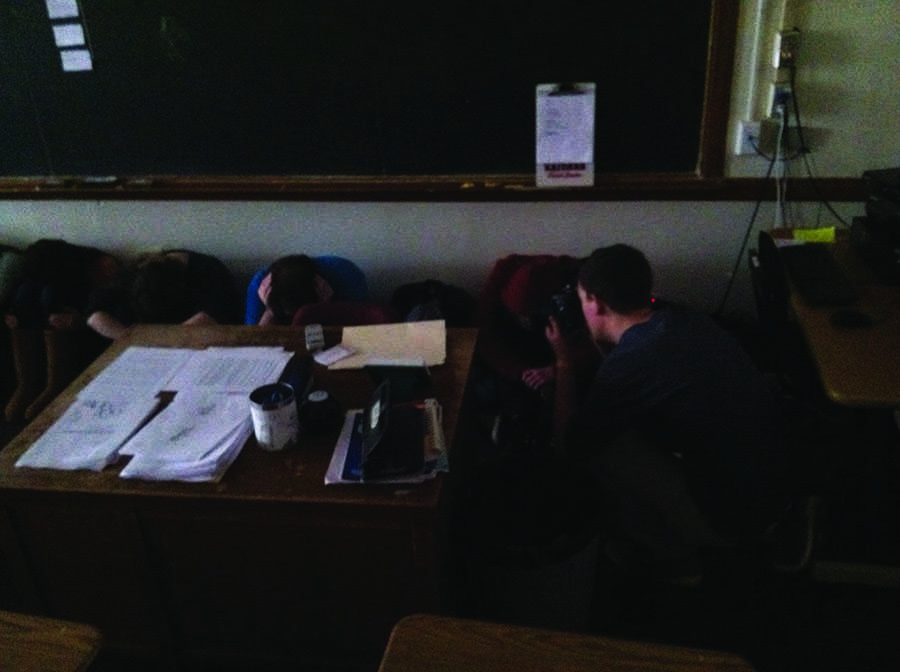 To create the cover image for this issue, Photo Editor Will McKnight photographed students who volunteered to act as if they were following lockdown procedure after school April 15 in Room 224.

Shaker schools will soon choose whether to stick with the current lockdown procedure or take on ALICE training, a program in which students attempt to evacuate the school building during a shooter situation instead of hiding in a locked classroom.

The district has sent a few employees to training, and more are slated to attend before the final decision is made. According to Superintendent Gregory Hutchings, however, the district will not train students in the near future.

“That,” said junior Gianni Ciccarelli, “is a terrible idea.”

In the ALICE program, Ciccarelli believes there is a risk that students and teachers are “going to get shot,” he said. “It seems more dangerous.”

Senior Deborah Taylor agreed that she prefers Shaker’s current lockdown procedure. However, she said that “if the shooter is right at the door,” out of fear, she would run.

Senior Danielle Nealon voiced a common fear that arises when contemplating escape. “If I ran away, I’d probably get killed or something,” she said. Like Taylor, Nealon doesn’t think much should be changed in the schools’ security plan.

Such reactions are not surprising. High school students have been taught to hide from an intruder for years. Today’s freshmen have practiced lockdowns since first grade.

Nealon said that because there hasn’t been a shooting during her four years at the high school, she feels pretty safe.

English teacher Halle Bauer agrees. “I’ve been in the Shaker community my whole life and I’ve always believed it was safe,” she said.

However, Taylor expressed concerns about student safety in a shooting situation and the possible downsides of a lockdown-only policy. “Sometimes, it’s not safe because lots of rooms have lots of windows,” she said. “Hiding against a wall won’t help.”

Students who follow the current lockdown procedure “end up basically sitting and waiting for the intruder to come and get [them],” junior Madeline Hertz said. She would prefer a “more active method.”

Some students and teachers already advocate attempting to escape school in a shooter situation, despite the lockdown-only policy. “I’ve had teachers who said that if there’s an actual lockdown, we should run out of a window,” said sophomore Naomi Gaston.

According to ALICE Program Manager Brett Joyce, staff and students try to overwhelm a gunman in one ALICE technique.

Sophomore Kobe Saunders does not welcome that idea.

“We shouldn’t try to create a panic,” he said. “People could get hurt. It’s probably best to stay in your classroom. Running just seems too risky.”

Hertz, however, supports the idea of ALICE training, specifically the technique in which students and teachers override and overwhelm an intruder. She said that if students “crowd into the hallways and start heading towards exits, then it would create a much more chaotic environment that the attacker would not be expecting or prepared for.”

Science teacher and Shaker parent Bill Scanlon said that ALICE training could work if it is “well-implemented, or else it might be misunderstood.”

Scanlon thinks students should remain in one place in a lockdown drill. “I think [lockdown-only] is effective for keeping students contained, which is your biggest concern if a situation happens,” he said.

Sophomore Casey Crowley would rather “run outside than stay in a class,” but opposes the idea of teachers trying to overwhelm and distract a shooter. Her mother, Valerie Crowley, is an intervention specialist at the high school.

Junior Isabel Rothman also leaned against the idea of teachers attacking a shooter. “I think some teachers could have the ability [to stop a shooter], but there are others who can’t,” she said.

Ciccarelli said he would not want either teachers or students to put themselves at risk. “The way we have now is far safer,” he said.

If Shaker chooses to keep the current lockdown procedure, Nealon said lockdown drills are not “necessary to do more than once a year.”

However, Bauer believes “lockdown drills are definitely necessary” and thinks “having at least two a year is a good thing.”

While some students and teachers have strong positions on the district’s lockdown procedure, others remain on the fence about ALICE. “I think there are ups and downs to each method,” Rothman said.

“I don’t necessarily agree with ALICE method,” Gaston said, “but sitting in a room doesn’t seem that great either.”