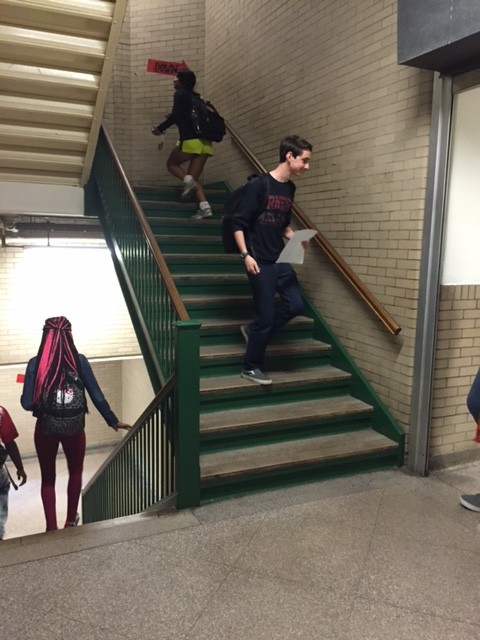 The north staircase, usually packed with students between 6th and 7th periods, was sparsely populated after the high school received two threats Oct 7.

Three threats made by an anonymous Instagram user have prompted tightened security as well as the voluntary departure of hundreds of students.

A threat to Shaker Heights High School was made over Instagram direct message at 12:12 a.m. from an unknown user. “I am coming with a rifle then I will blow the b—- up,” the message stated. After the first-period announcement, students left the high school in mass, many ushered home by concerned parents or guardians.

The same anonymous Instagram user posted a follow-up threat around noon via direct message saying, “I heard everyone believes it’s a joke. Ha Ha  the school doesn’t know I can do it at anytime just be ready everyone in that school will have their heads blown up or die in an explosion by the end of the week.”  A third message was sent that read, “Too bad there aren’t metal detectors ha ha I might go to that school ha ha ha.”

In response to rumors surrounding the first threat, Principal James Reed made a P.A announcement at 8:37 a.m. directing staff to check emails. The staff email stated, “We and the SHPD are aware of the threat made on [I]nstagram. The police are investigating. School is proceeding as normal today. If you wish to excuse your child today it will be an excused absence.” Parents need to call in to excuse their students before students leave.

Reed sent a follow-up email and phone message to families urging calm at 10:55 a.m. “There are a number of rumors circulating today regarding the high school, none of which are true. The police and school security are investigating the situation, and there is no need for parents to pick up their students.”

Sophomore Kayin Claytor was ambivalent about the situation. “The naive part of me says there is no threat, but there is always a chance that this could be a real threat,” he said.

He added that “The school would not be able to handle the situation if [an assailant] entered the school.”

There were bomb scares in five schools around Cincinnati near 10 a.m. Wednesday morning.  Specialist Mike Grimes said in an interview with FOX News, “He or she said there were some explosives in one of the schools but wouldn’t say which one.  The caller hung up and the schools began their evacuations.”  The events, however, were not related.

“I know this doesn’t happen that often, because my sister’s been here before me,” said freshman Esme Alexander-Jaffe. “I feel pretty safe right now.”

The Shakerite is following this story as it develops