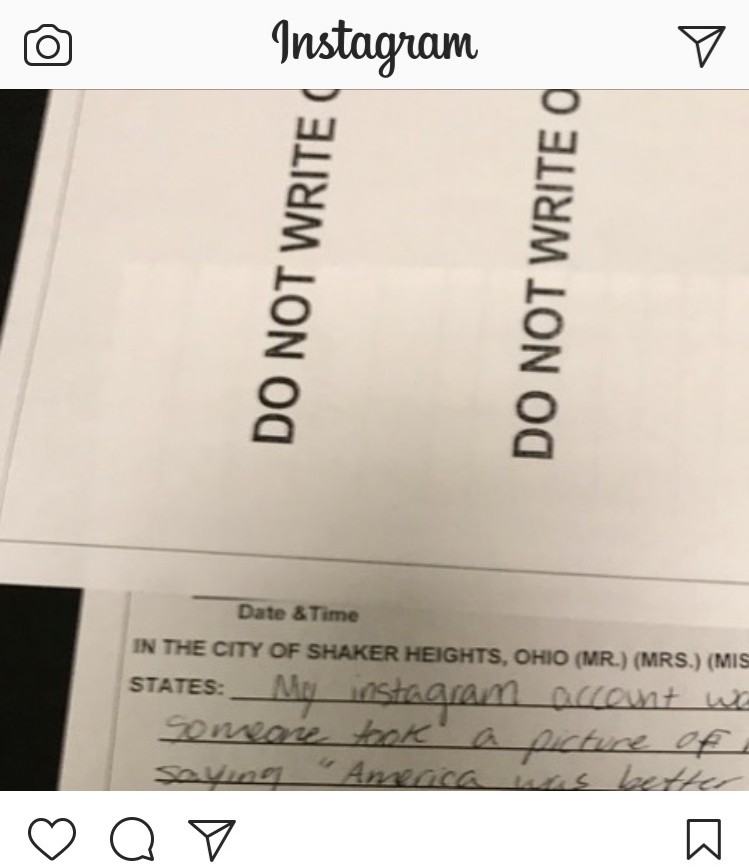 An Instagram post using demeaning language about African-Americans was taken down by the user soon after it was posted. The user replaced it with an apology and explanation, followed by a picture of the police report she completed.

The post, which appeared in her Instagram feed under her user name at 6:37 p.m. yesterday, contained a photo with a caption that stated, “America was better when we owned the n*****s.” It was the first in a series of three photos, with the second depicting the girl making comments on her relationship and insulting the recipient. The third picture was a screenshot of direct messages between the user and another user on Instagram.

The post was removed after about 30 minutes and replaced with a blank white square and a caption that apologized and stated the picture was “not the original,” but an edited version someone else posted.

“I didn’t do that,” she said in an interview with The Shakerite. “It was a picture of me I’d taken on Snapchat, but with a Snapchat caption I’d not typed.” The girl said she learned of the post when people contacted her after viewing it.

“I wasn’t on my phone for a while, and then everyone started calling me,” she said.

The incident is the subject of investigation by the school, and, according to Kuehnle, possibly the Shaker Heights Police Department. “In the meantime, if anyone has additional information they would like to share, they may share it with me,” Kuehnle wrote. “Also, it is very important that we stick to the facts and let the investigation lead us to the truth.”

According to the girl, Kuehnle called her mother and will meet with the girl today.

The girl posted another photo on Instagram of the cover of a police report, clarified her position and apologized for the post once more. “I have just filed a police report. It includes everything anyone has commented or said to me,” she stated in the post, adding that the police do not know anything at the moment. “I’m sorry if the post that had been posted offended anyone. I had never even typed that sentence.”

According to Ohio law and Shaker Heights district policy, bullying on school grounds, school buses or at school-sponsored events is not permitted. The school’s definition of bullying includes cyberbullying, but legally the school would have difficulty punishing any student for a broad racially-charged statement made on a private social media account.

The school can, however, punish students on grounds of disruption of learning and student-to-student bullying committed on school grounds, or for cyberbullying of a student no matter where it occurs. Additionally, if her account was hacked, police would have grounds for an investigation.

The girl said she has received support from friends, but others have made threatening comments. “People were posting screenshots of it on their stories,” she said. “Some were saying, like, ‘You think you’re not gonna get your ass beat?’ ”

“Mainly, I’ve had a lot of friends supporting me and saying, ‘I know you would never do that,’” the girl said, “but there are also people who have posted stuff about how I’m a horrible person, how I’m racist, how they don’t trust me. There are some jokes about hurting me.”

In 2016, a Shaker student texted disparaging comments about African-Americans to another student, who then posted screenshots of the texts on Snapchat and Twitter without the first student’s permission. The student who wrote the texts and the student who received and posted them were suspended.

Wrote Kuehnle, “I strongly encourage people not to engage in gossip and rumors — doing so helps no one, may make the situation worse, and may compromise the investigation.”