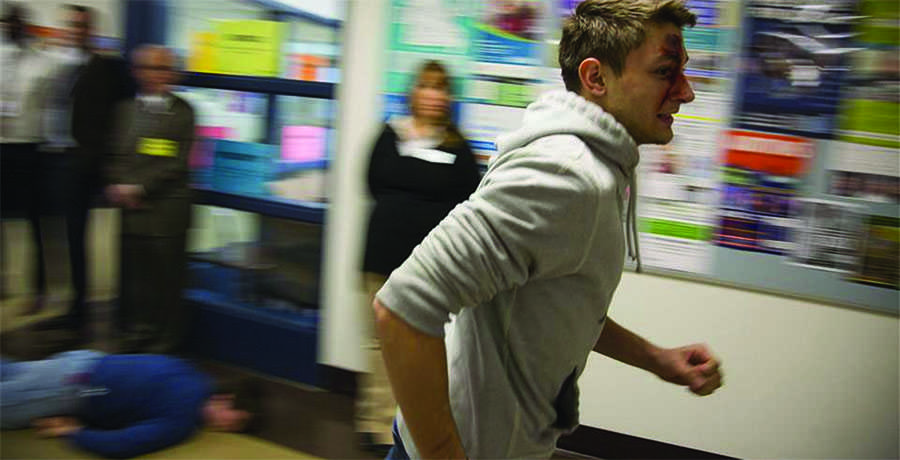 Students in a Troy, Missouri school participate in an active shooter drill during February. In this drill, theater students performed the roles of injured, killed or fleeing students as police shot blanks at them.

Some schools have gone far beyond lockdowns to prepare for an event they hope will never happen.

With the introduction of agencies such as The ALICE Training Institute, which train schools to react proactively in shooter situations, schools around the country have begun performing extreme shooter drills to train teachers and students to fend off armed intruders. These drills use guns that shoot blanks, fake blood and even actors to simulate a school shooting.

According to NBC News, a school in Troy, Missouri staged an extreme shooter drill in February. Sixty-nine students participated in the event, which included police officers shooting at them with blanks. The students wore makeup that simulated blood from gunshots wounds. Most of these students had some background in acting and came from the school’s theater department.

Such drills are required by Missouri state law passed in August 2013, and they are increasingly common in schools throughout the country.

Shaker Theater Department Chairman Scott Sumerak, who participated in such simulations at a previous school, believes the drills’ psychological effects should not be underestimated.

“I can tell you that even in an imaginary situation, the experience can have an impact on those involved,” he said. “You can say to yourself, I am here to play a part,’ but once things start, it can be unsettling.”

Sumerak believes the drills will only be effective if schools plan them out thoroughly.

“If rushed into without careful consideration, simply to show how forward-thinking an organization is, I think the damage would far outweigh the benefits,” he said.

According to the Morning Journal, a Lorain newspaper, schools in Lorain County practice active shooter drills coordinated through ALICE. During the drills, Lorain schools label the sides of the building to help law enforcement officers locate a shooter, while students are told to confront the intruder by throwing chairs and tackling him.

The complicated parts of these drills comprise determining their overall goal and what role students should play during them.

“If the goal is to prepare the people in charge to react and respond efficiently, that’s one thing. But if the goal is to mentally prepare students to respond calmly in a crisis situation, that’s something completely different,” Sumerak said. “With the right approach, these drills could be very helpful for both the first-responders and those receiving the training.”

Lorain and Troy both involved students in their respective drills. If Shaker performed one of these drills, Sumerak believes that his theate rstudents would be willing to participate.

“The students in our classes would be very open to participating,” Sumerak said. “We would support and facilitate this involvement as long as there was a clear training program and an opportunity to formally process the experience afterwards.”

Senior theater student Lucy Richman agreed. She believes if students understand the situation, they should be allowed to participate.

“I think if the students are OK with participating in it and they know what they’re getting themselves into, then that’s totally fine,” she said.

Richman said she would participate in an active shooter drill if she was asked to help, and that the drill would test her acting abilities.

“I mean, it’s something that’s really relevant and goes beyond just acting on stage in front of an audience,” she said. “There’s something at stake beyond just entertainment, so it’s a lot more challenging.”

NBC reporter Nona Aronowitz reported on the story about the active shooter drill in Troy, Missouri and saw the drill firsthand.

“It was pretty harrowing to see students pretend to be shot,” Aronowitz said in an email interview. “One girl started crying uncontrollably and had to be calmed down by a teacher and a friend, but most kids were fine and didn’t react this way.”

Aronowitz said the most unusual part of the experience was the preparation that went in before the drill.

“It was weird seeing kids putting on stage makeup and moulage and laughing about how they were so excited to get shot,” she said. “It was jarring to see kids acting so casual about such an intense experience.”