Shaker ponders survival strategies that have evolved since Columbine shootings 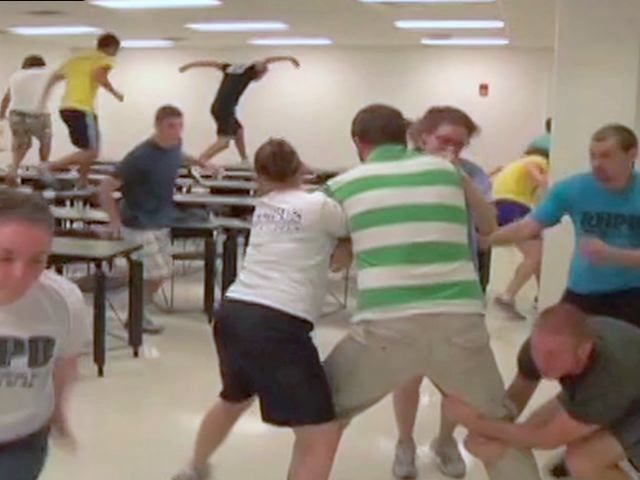 In a training exercise, some high school students practice overwhelming an intruder while others evacuate the scene. As school shootings have continued, schools and law enforcement agencies have begun to adopt and rehearse more aggressive responses than the lockdowns legislated throughout the country in the years following the assault at Columbine High School 15 years ago.

A  lot has changed since Columbine.

“Why is it OK for [students] to leave when the shooting is over, but not before, when they could get out of the way of danger?”

That’s the question Nick Feyerchak, program manager at The ALICE Training Institute, asks. The ALICE program, which Shaker Heights is considering adopting, is an alternative approach to the district’s current lockdown procedure. ALICE is an acronym for the terms alert, lockdown, inform, counter and evacuate.

Founded in 2001 by law enforcement officer Greg Crane, ALICE trains students to evacuate the school building instead of locking themselves in classrooms and hiding.

“Learning to save your own life is imperative,” the organization declares on its website.

Last spring, in the aftermath of the Sandy Hook Elementary School shooting that killed 20 students and six adults in Newtown, Conn., the district critical events committee convened to talk about the possibility of adopting ALICE training. The district also updated its critical events policies and replaced Critical Events Ready Reference manuals that have hung on clipboards in classrooms throughout the district since 2002.

“We’re revamping lots of things,” said high school Principal Michael Griffith. “It’s easy to get lulled into everything being status quo, but it’s time to fix some things and ask questions.”

While the updated manual includes instructions for a shooting situation, they do not resemble the ALICE imperative. They state that “if shots have been fired in your room,” teachers should “not try to be a hero” and instead “await police rescue.” Additionally, “Do not approach the shooter or attempt to confiscate weapon.” In the case of shots fired elsewhere in the building, the policy states, “Instruct your class to go into Safety Alert mode,” which the 2002 manual depicts as a lockdown response.

In recent years, however, law enforcement agencies have endorsed more active responses to these incidents, and schools locally and nationally have adopted them.

Locally, Chagrin Falls, Medina, Orange and Kenston schools have all implemented ALICE training, as well as the University of Akron and Kent State University. The training has been endorsed by experts throughout the country, including Ohio Attorney General Mark DeWine.

Shaker Heights Police Chief Scott Lee said that intruder procedures have “dramatically evolved.” over time. “It’s something we’ve had to really concentrate on and deal with.”

Lee, who has worked in law enforcement for 33 years, explained that the police department and the school administration “meet on a regular basis to discuss issues that are common between the city and the school.”

Lee specified that the responsibility to decide upon safety procedures falls on the schools. “Our job is to work with the schools once they make that decision,” Lee said, “to make sure that it’s successful.”

“It’s still very much in the investigation stage,” District Communications Director Peggy Caldwell said. However, “Mr. Smith and Mr. Gale thought it was worth continued exploration after they went through training.”

“The training went very well,” said Hutchings. “I received positive feedback from Ouimet as well as from Mike Gale . . . We got to see that it really wasn’t everything that people think that it is.” Hutchings said some members of the public believe ALICE has “students trying to attack an intruder and that type of thing.”

“There are people who think we train kids to shoot a gunman,” said ALICE Program Director Brett Joyce. “That’s not true.”

At training, ALICE officials “debunk myths” about ALICE, said Joyce, such as the misconception that ALICE trainees attempt to attack intruders.

“It takes years and years to become good at fighting,” Joyce said. “Boxers and wrestlers train their whole lives.”

“We teach them how to overload the shooter’s mind,” Joyce said. “A shooter is normally a child who is inexperienced with guns.”

The district plans to work with the police department and the ALICE Institute to hold a training session in Shaker during the summer to “gain the perspectives of teachers, administrators and others on the program,” according to Caldwell. “It is another step in assessing whether ALICE is right for Shaker.”

“This is totally different, and so we want to understand it,” Griffith said.

Police Chief Lee said that every school is different and school environment is different. “One program isn’t going to be best for all schools,” Lee said.

Hutchings said that undergoing training will teach “adults that there are options that you may have if there was ever a situation where you have an intruder in the school building.”

“Ideally in that situation you would act like a hero,” she said, “but most teachers didn’t become teachers to save lives. If they wanted to save lives, they could have been firefighters or police officers . . . I think putting that kind of responsibility on teachers isn’t a great idea.”

Although teachers may have more options with ALICE training, “they wouldn’t want to make any rash decisions because there’s so many different things that could be going on,” Bauer said.

Feyerchak cited the 1999 Columbine High School shooting, in which 13 people were killed, as the major reason for the ALICE program’s creation. “Fifteen years ago, Columbine was lockdown only,” he said. “The shooting actually started in the cafeteria. Students in the library there actually had the exit available to them for use. The protocol was for them to lockdown only.

“So, they had an exit available to them, and they could have been out of that library away from the danger, but the mandate was that they stay in the building and hide and wait for law enforcement to arrive,” Feyerchak said. Ten of the 13 people killed at Columbine were inside the library.

Since 1999, school shootings have continued to occur across the country. In February 2012, three students were shot and killed at Chardon High School, 18 miles from Shaker Heights.

“After each incident of violence in other schools,” Board of Education member Annette Sutherland said, “board members request that our administrators study those other situations and consult with law enforcement to determine whether Shaker’s security equipment, procedures and training need to be updated with learning from those tragic examples.”

Griffith, too, expressed a willingness to consider other options. “We want to hear what else is being talked about as an approach that makes you more safe,” he said. “All of those [other school shootings] influence us. As things happen in a community or outside anywhere in the country, that influences you.”

Feyerchak portrayed the process of responding to an active school shooter situation as time consuming. First, someone must dial 911 to alert the police. The call goes to a dispatcher, who must connect to police officers. The officers then must reach the school, which can take as long as eight to 12 minutes. While the high school is only .5 miles from the police station on Lee Road, Mercer Elementary School is 3.3 miles from the station, an estimated eight-minute drive.

By the time a shooter is located in the school, said Feyerchak, 15 to 17 minutes have typically passed. The average shooting situation lasts between five and six minutes.

“Lockdown-only is a potentially fatal strategy,” Feyerchak said. “ALICE is more proactive than sitting and hiding under a desk waiting for someone to save you.”

Shaker Heights High School psychologist Sagar Patel sees the pros and cons of active-shooter training and believes it would be best for some situations.

Patel said despite the emotional toll it could take on children, ALICE training may be worth the risk. “It helps people not to freeze and prepares educators,” he said. “You can never have too much training.”

However, Patel said the problem with such training is the amount of students who would evacuate the school at once. That many students would crowd the halls, which may put students at risk.

Junior Madeline Hertz believes a large number of students in the hallway would overwhelm the shooter, one technique ALICE teaches. “The chaos of [students] running out of the classroom could be beneficial,” she said. However, she said it could also pose “more of a risk.”

According to Feyerchak, schools as large as 1,800 students have been trained by ALICE.

In the end, Bauer said, “The administration has done its research, and I fully trust them to implement a plan that protects students and teachers.”

Sutherland said she does not yet have an opinion on ALICE, except that she wants “our security personnel to study the program and make a decision about whether to pursue it. . . . There is always a chance of a change based on new awareness and new tools.”

“This is a starting point for you guys,” Feyerchak said. “You guys are taking the next step in moving forward.”

Hutchings said that the district will have “a plan and situation in place before the school year next year.” The decision to adopt ALICE is “not something we’re going to prolong,” he said.

However, “Whatever the practice we adopt, it will still be customized to meet the needs of Shaker,” Hutchings said. “I don’t believe in purchasing practices off of a shelf.”

“No doubt, we should explore everything and anything that would give us the best possible situation to keep everyone safe,” Griffith said. “If [ALICE is] the best approach that would accomplish that, then that’s what we would like to do.”

“Our goal is simple,” he said. “We want to be safe. We want to make sure students feel comfortable and know that we have the safest school environment that we could have.”