Hutchings Presents 90-Day Plan to Board 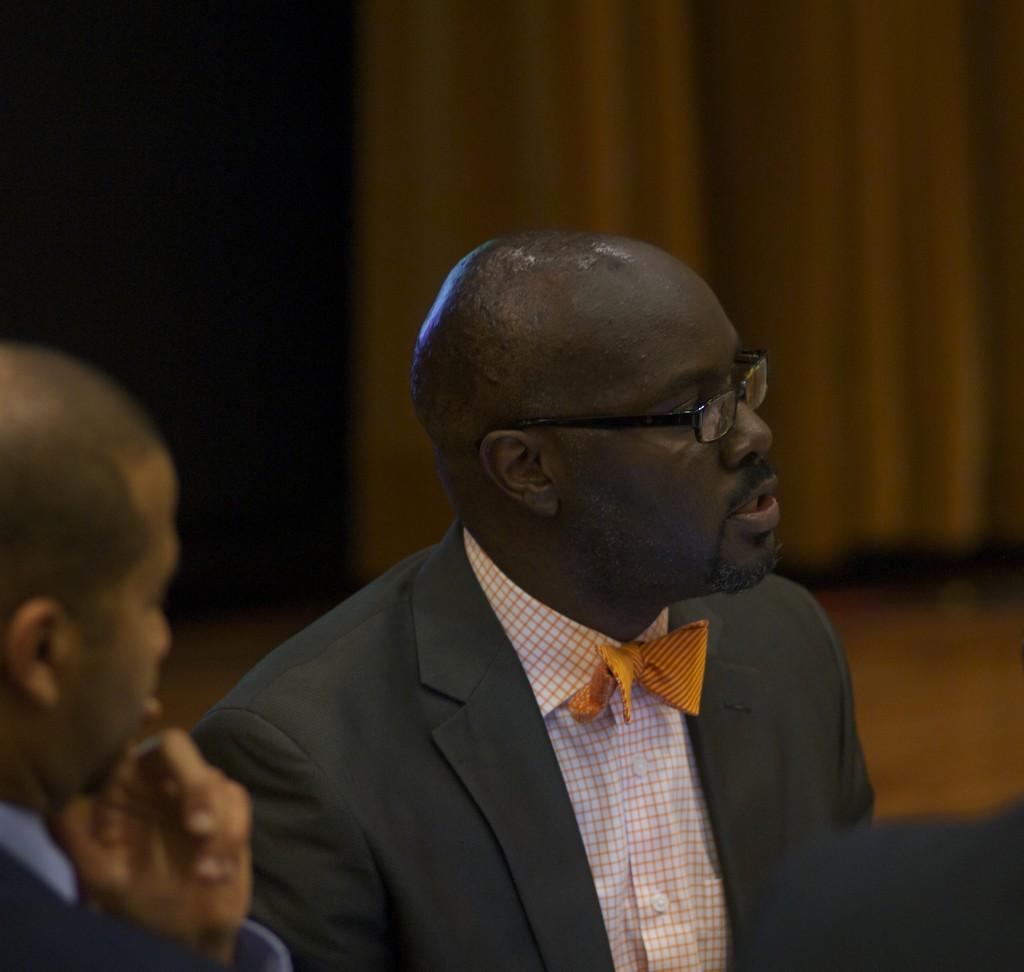 Board Member Bill Clawson listens to Superintendent Gregory C. Hutchings, Jr. during the Sept. 4 board meeting. At its Dec. 17 meeting, the board voted unanimously to put a 6.9-mill levy on the May ballot. The levy is Hutchings' first as superintendent.

Superintendent Gregory C. Hutchings Jr. announced that the Shaker Heights City School District is considering applying for state grant money to create an “online learning center” for students who require an alternative classroom setting during the presentation of his 90-Day Entry Plan to the Board of Education last night in the high school Small Auditorium.

Hutchings spoke for about one hour and 40 minutes to the board and an audience of 15 community members. He explained the details or “action steps” of his five goals for the first 90 days of his superintendency. The five goals were included in a “snapshot” of his 90-Day Plan, submitted to the board when Hutchings was a candidate for superintendent.

Hutchings’ contract officially started Aug. 1, but the first-year superintendent was paid as a consultant during July to begin working on writing the action steps and implementing his ambitious plan.

The first goal involves ensuring that the district is continually progressing and focusing on student achievement. The first action step is analyzing the mixed results for the district on the state report card released at the end of August.

“A part of my 90-Day Plan is to evaluate that data, to look at specific areas that we need to focus on this upcoming year, as well as to begin to have discussions about some solutions or practices that need to be changed in order to change some of these results,” Hutchings said.

At an Aug. 21 community meeting about the state report card, Hutchings announced he would end the policy of social promotion.

Goal two, the most extensive of the five, addresses ways the district can increase community involvement in the schools through more “effective communication.”

Action steps for the second goal include expanding the district’s social media presence, establishing a Student Advisory Committee, promoting district achievements to local news media, making a district report card “to highlight areas not included in the Ohio Report Card,” and meeting with Shaker parents who send their children to private schools to hear their perspectives of the district.

Hutchings has already released three videos on YouTube with messages for community members, new families and new teachers and has created a Twitter account to update community members with timely information.

Goal number three calls for working closely with the board. Action steps include meeting regularly with two members of the board at a time and visiting schools with board members to conduct building scans.

Hutchings, who plans to visit every classroom in the district in his first 90 days, mentioned that he spent two hours yesterday at Onaway Elementary School doing building scans. Hutchings said that building scans ideally encompass visiting each classroom for about three minutes to gauge classroom atmospheres, but that he was delayed today by excited students asking him questions about his new job.

Hutchings’ fourth goal addressed “curriculum, instruction and assessment.” One significant step is to extend the IB Middle Years Programme philosophy universally to grades 11 and 12, so that it continues beyond the MYP grades of 5-10. “We would like for the IB philosophy to be aligned in all of our classes, regardless of if you’re a part of the IB Diploma Programme or not,” Hutchings said. “We want teachers to stand and believe in the IB philosophy as a district, because we’re an IB district.”

Other steps included achieving MYP authorization by spring of 2015, improving the four-year graduation rate, and partnering with local universities to have student-teachers practice their technique in Shaker schools and Shaker teachers receive training at the universities.

Goal number five entails examining the district’s finances. Hutchings said he is aiming to bring in an additional $1 million in grant aid this school year. He said that the district is considering applying for a $5 million state grant for establishing an online learning center for Shaker students as an alternative to conventional classroom education.

At the beginning of the meeting, Hutchings announced the district would extend its current two-year Strategic Plan for a third year and that he would continue to meet with the Transition Advisory Team he started in August, which comprises students, parents, faculty members and community members, until December.

Hutchings will present his findings to the Board in December. In that meeting, Hutchings will outline approximately ten major problems he found during first 90 school days. From there, Hutchings hopes to establish a new, five-year strategic plan to address those problems. Read the district’s current strategic plan here.

At the meeting’s end, Board of Education President Annette Tucker Sutherland told Hutchings the board would strive to help him implement his plan.

“I think we all need to take a deep breath and to support you in any way that we can,” Sutherland said.