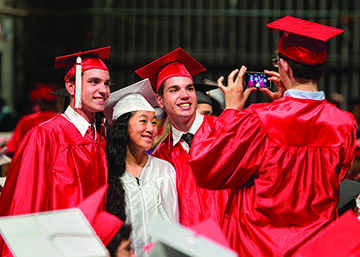 According to Ohio Department of Education's Associate Director of Media Relations John Charlton, the new system used to track graduation rates measures each student individually, rather than a class as a whole. Shaker's graduation rate went up six percentage points, a change attributed to the state's new measurment method and practices within the district.

Junior Abby Connell, who intends to walk across the graduation stage in 2016, is encouraged by the rising rate, but thinks it could be higher. “I thought it was too low,” said Connell. “I mean, I don’t know what other schools like us look like in terms of graduation rates, but the fact that quite a few people don’t graduate each year was never something I had thought about.”

“The fact that it’s gone up so quickly is definitely promising,and I hope it continues to grow,” she said.

Dale Whittington, the district’s director of research and accountability, attributes this change in part to the state’s altered description of a four-year graduation rate.

In 2011, the ODE began reporting a longitudinal graduation rate using the class of 2010’s data.

ODE Associate Director for Media Relations John Charlton said this system accounts for individual students’ graduation dates, rather than taking the number of graduates from each graduating year and comparing that number to the original ninth grade enrollment.

“If 100 students start as freshmen, and 10 dropout, and 10 new ones come in and 100 graduate, your graduate rate is not 100 percent,” said Charlton. “It’s less than that because it accounts for the 10 who dropped out.”

“We’re tracking each individual student, as opposed to just doing numbers,” Charlton said. He explained that the ODE adopted this method because it allows comparisons between Ohio and other states.

“If students took an English class over the summer, but didn’t turn in the paperwork, they might not be included in the class, and so we are more expressly trying to monitor kids,” said Griffith. “We remind them to get the credit in. Somebody has to keep an eye on that.”

Students who earn the credit, whether it’s an OGT or a summer course, are pushed to get the credit into the system for verification so they can be included in their graduating cohort.

“It’s big stuff and little stuff,” Griffith said. He meets with some students individually when he is concerned they are not meeting their Adequate Yearly Progress goals. AYP refers to national standards that track student growth, encouraging graduation within four years.

According to Whittington, “its base year is the ninth grade. If a student graduates in five years, they don’t count federally, but they do count in the state numbers.”

Whittington explained that the system is cumbersome because of the law that bans states from using students’ social security numbers, making it impossible to track students digitally. “There is not a state system to track the same students over time,” said Whittington, “so the system data doesn’t follow you from school to school. They only have a paper record.”

Instead, the state uses a label called the Statewide Student Identifier. SSID’s unwieldiness makes changing schools difficult. Without an electronic record, transferring credits and data into the new system is cumbersome and makes determining the credit status of students who move into the district much more challenging.

Superintendent Gregory C. Hutchings, Jr. said that the district begins this process before the student even reaches high school. Hutchings hopes that his elimination of social promotion in 2013 will create a smoother transition to the high school.

“I think we’re looking at the other factors that are causing students to not be on grade level, social or emotional needs that have not been met,” Hutchings said. The high school has policies designed to meet that need.

Students flagged as needing counseling through referrals are sent to the district’s Social Advocates for Youth Counselor, Tana Gadelsayed. The SAY program works through Bellefaire JCB, an external youth services program based in Cleveland.

“Basically I can see any student and I can get referrals from any source,” Gadelsayed said. While these referrals mainly come from assistant principals, they can also come from guidance counselors, teachers and even students coming to Gadelsayed’s office on their own.

The student then sits down with Gadelsayed for a series of meetings. “Oftentimes things come out where, maybe, there’s a mental health issue or something’s going on with family or friends, and that’s getting in the way with what they can do academically,” said Gadelsayed. “I’ll meet individually with the student and if need be, if I find that there’s a mental health concern, then maybe I’ll reach out to the parent or I’ll make a referral as needed.” She describes the process as a “case by case basis.”

Despite the efforts to improve the graduation rate and the advancements so far, Connell thinks there is still room to grow. “I definitely think that’s something we need to work on because having your high school diploma is such a big statement on your life,” said Connell. “A diploma is going to get you so far.”