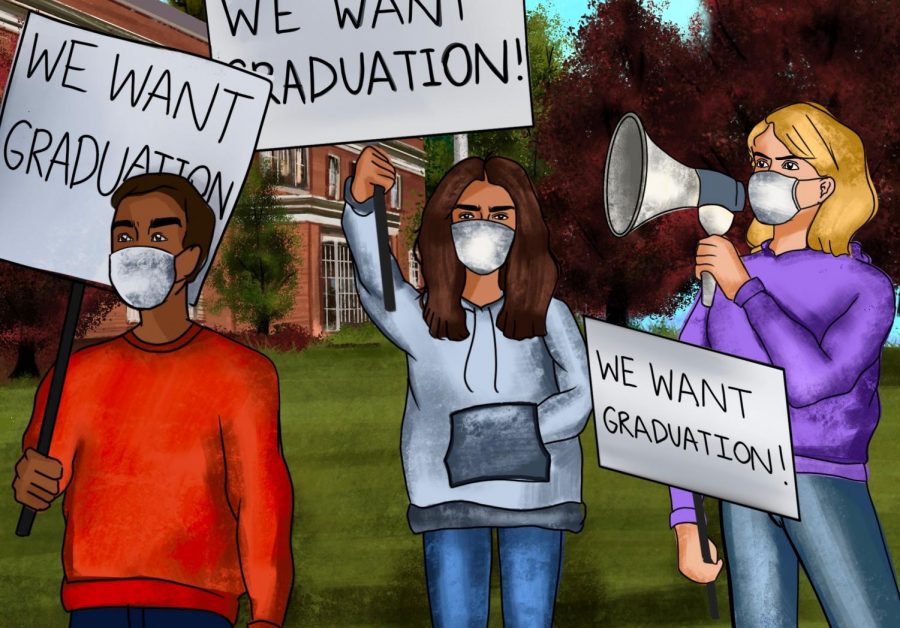 In response to the district’s decision to hold 2020 commencement online, some seniors and their parents intend to protest Friday at noon, beginning at the district administration building.

The protest has been promoted via text and social media. The protestors intend to observe social distancing guidelines. “We will all stand arms distance apart at all times,” the message stated.

The message encourages students to wear Shaker attire, make posters and share the event with as many seniors and parents as possible. The Shakerite could not confirm who composed the message.

Principal Eric Juli said he does not support the protest. “I think that there’s a better way to show that sadness and anger than protesting during a pandemic,” he said. “I’m certainly understanding of everybody’s emotions, and I’d like to find a better way to approach them.”

Senior Brooklyn Williams said the purpose of the protest is to have the administration hear seniors’ ideas. “Hopefully they will have a change in mind and let us walk the stage,” she said. “This is a peaceful protest. We just really want to let them know how we feel.” Williams said she is not sure who initiated the protest effort.

Williams said she will participate in the protest and hopes to eventually walk the stage to graduate. “I committed to something for 12 years, and it feels like I’m getting robbed,” she said.

Juli said that he welcomes any ideas to help improve the situation for the class of 2020. “If we can find a better way, a different way, an additional way to honor and recognize our seniors, I’m all ears,” he said, “I’m open to any idea that doesn’t violate the stay-at-home order that we’re under.”

Dr. David Glasner, superintendent, said that a protest would not be safe. “I really hope that however people choose to voice their opinion, that they’re really taking [the stay-at-home order] into account,” he said.

Howard Nathan, a doctor of internal medicine and a Cleveland Clinic hospitalist, said about one-third of the population may be asymptomatic carriers of the coronavirus. “If you just have one person that’s handing the signs out, handing the flyers out or what have you, they could be theoretically infecting everyone else,” he said.

“Those high school students that now have the coronavirus on their person, they can then in turn go home, pass it along to their parents and their grandparents.”

Nathan, who said he only takes care of positive COVID-19 patients, said this virus should be taken seriously. “I’m seeing some really sick individuals. This is not something that I would wish anyone to get,” he said. “When this hits you, it really incapacitates you.”

“I agree with what they’re protesting for, but also I feel like there’s much more effective ways they can relay that message to the administration,” she said.

Another senior, who asked to remain anonymous to avoid judgement, said, “As much as I hate the idea of online graduation, I’d rather have that than putting myself and others in danger or having them wait to try to give us a real graduation, and then having a shut-down in the fall and not getting anything.”

The student said that people are not going to maintain adequate distance at the protest. “There’s no way you’re going to be able to social distance if you’re trying to get all seniors to come,” they said. There are 363 students in the senior class.

Williams said Glasner should have sought students’ ideas first. “They’re kind of just brushing class of 2020 off and just focusing on the next school year,” she said.

Shaker parent Lynn Green, whose children are seniors, said the email about virtual commencement came as a shock. “It felt distant,” she said. “I think we were kind of surprised to see something come out in writing, I’ll be honest, without having gotten some feedback from the community first.”

“We have twins that are seniors this year, and they’re our only kids, so we’re going to miss out on the chance to see them with a graduation,” Green said.

Green’s two children, Natalie and Elliott Green, do not plan to protest. “I fully support giving a response to how we want more than this,” Natalie said. “But, I don’t think it should manifest itself in something that just isn’t safe.”

Shelly Assel, parent of a senior, said she was taken aback by the commencement message. “I think it was jarring to hear that,” she said. “It would have been nice if you guys could have received it in a more personalized way, but I’m not really sure that would have been possible.”

Juli said he wishes there was a better way to celebrate seniors’ accomplishments. “I don’t think there’s such a thing as the right way to go because it’s terrible for everyone — most of all our seniors and their families,” he said.

Glasner said no matter how the message about commencement was delivered, it was going to be hurtful. “I always think there are things we could do better,” he said. “Typically we really try to engage our stakeholders in at least providing more information and notice about upcoming major decisions, and we didn’t do as good a job in that this time as we could have.”

Shaker parent Sharyn Lowenkamp said she is upset about how the school handled the decision. She said that with Gov. Mike DeWine’s decision to cancel school coming a day before the graduation announcement, it seemed like the district didn’t put much thought into the decision.

Juli said that it was necessary to make a decision now because waiting too long could result in a worse situation, such as having no recognition ceremony for the class of 2020. “We’re just trying to care about everybody in impossible circumstances,” he said.

Glasner said the decision was made after considering lots of options. “If the stay-at-home order and social distancing guidelines and health protocols change over the course of the next few months, we’re absolutely open to having some in-person celebration for our seniors later in the summer,” he said.

Glasner said the discussion about handling the commencement ceremony began when DeWine announced March 12 that all Ohio school buildings would be closed until at least April 3.

Juli said, “We’re also thinking deeply about safety of staff. Any event that we have later in the summer, or now, or whenever involves staff members being there, too.”

According to a Shaker Heights police officer, if the protestors are grouping together or causing traffic violations, they may be issued a citation, but if they keep social distance, they should be fine, legally. “At this point, there’s not really a law against it. It’s all just recommendations,” he said.

Glasner is advising students to follow the stay-at-home order, and he offered an apology. “If there were missteps on my part, I apologize. This is new for all of us,” he said. “I understand and I’m sorry for the frustrations and disappointment on behalf of our seniors, and we want to do everything we can to make sure that we are still able to celebrate and recognize our seniors and all of their accomplishments.”