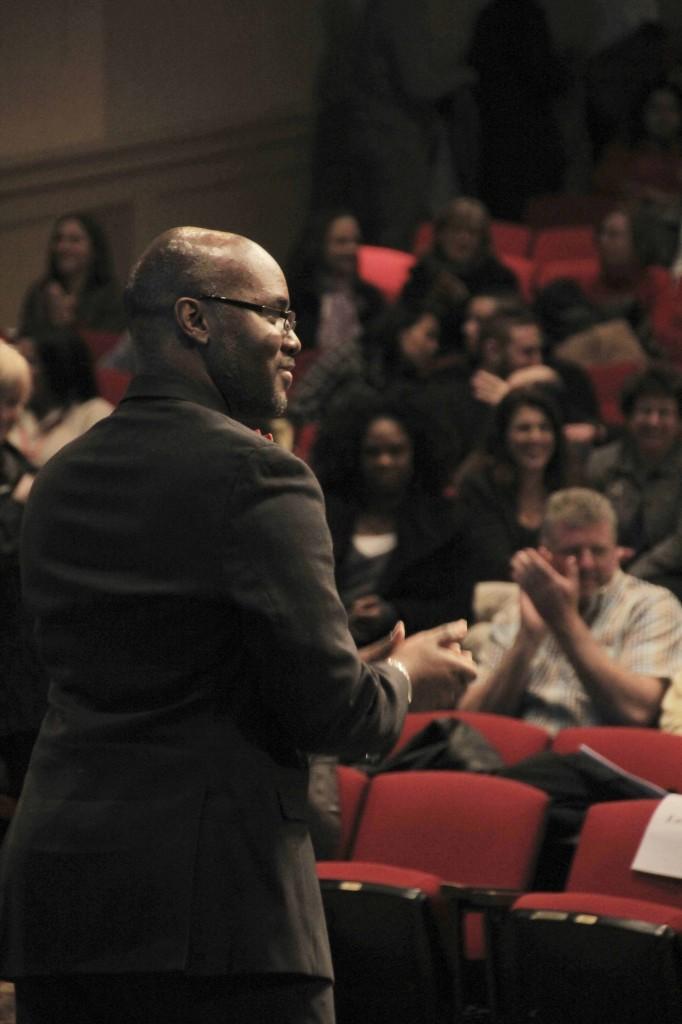 After the applause tapered out, and the sound of Kool and the Gang rang again through the speakers, audience members shared their opinions.

“He seems to be a promising superintendent,” junior Zach Reizes said. “However, I am disturbed by the fact he promised no more snow days.”

Reizes’ reaction was one of many varied ones following Superintendent Gregory C. Hutchings, Jr.’s first State of the Schools meeting tonight. Hutchings held the meeting in the high school’s Large Auditorium, creating more of an event — complete with ’80s music — than former Superintendent Mark Freeman, who held the address in the upper cafeteria.

Some audience members appreciated the new setting. Assistant Principal Eric Hutchinson called the Large Auditorium “a more beautiful setting than the upper cafeteria” and “more comfortable for everyone.”

Hutchinson felt the meeting was “refreshing” and “needed.” He praised the superintendent for being “willing to share his thoughts” with the approximately 400 parents, students, teachers and community members who attended the meeting.

In his address, Hutchings spoke about the observations he has made during his past six months as superintendent and the challenges he has observed in the district. He addressed diversity, the achievement gaps, the International Baccalaureate Programme and the district’s financial status.

Hutchings often referenced the Board of Education’s commitment to fiscal responsibility. Board member Reuben Harris said that they plan to cut the budget by $1 million a year. The $250,000 cut in the budget Hutchings spoke of shows the progress he has made in his roughly seven months as superintendent. Harris expanded on Hutchings’ comment about reviewing building access as a cost-saving measure. “We should just maximize dollars and not open the school for 10 kids,” he said.

Shaker Treasurer Bryan Christman, like Hutchings, emphasized the importance of the May levy. “I think it’s what we’ve always tried to do and be,” he said, “but in the future with 21st century learning, things are changing and we must be more conscious of how we spend the money without influencing the learning process.”

Hutchings also discussed changes to the college preparatory classes; specifically, eliminating the CP label. Harris supported these changes, saying “A kid should be able to go to a learning environment they feel confident and competent in.”

Board of Education President Bill Clawson praised Hutchings’ handling of his observations in his speech. “I think Dr. Hutchings did a wonderful job laying out not only our challenges, but where we’re headed as a school district, and the fact that we all need to work together to get there: parents, students, as well as community members,” he said.

High school Principal Michael Griffith agreed with Clawson. “I think they’re excellent decisions and a great direction,” Griffith said. However, he pointed out that Hutchings has a long way to go in enacting his plans. “I think it is still early in his tenure,” he said. “As the Strategic Planning Committee finalizes this work, then those initiatives and plans will come to more detail and there will be more light on specifics. So he has all the right things that he mentioned, I think it’s just a matter of time and our ability to spend some more of that energy in kind of digging out through the issues.”

Shaker Heights Chamber of Commerce President Debra Hegler said, “One of the things that disappointed me with Mark Freeman’s reign was that I don’t think he embraced technology in a way that he could have, and I don’t think that he spent enough time in classrooms engaged with students.” She appreciates Hutchings’ more hands-on method. “I thought the superintendent was really on point with every area. I’m very excited about the changes he’s going to make.”

Read about Hutchings’ speech, here, and a reporter’s notebook of the night, here.