At the fifth facilities meeting, participants chose between four concepts for Shaker's facilities; replacing middle school, renovating everything else won out 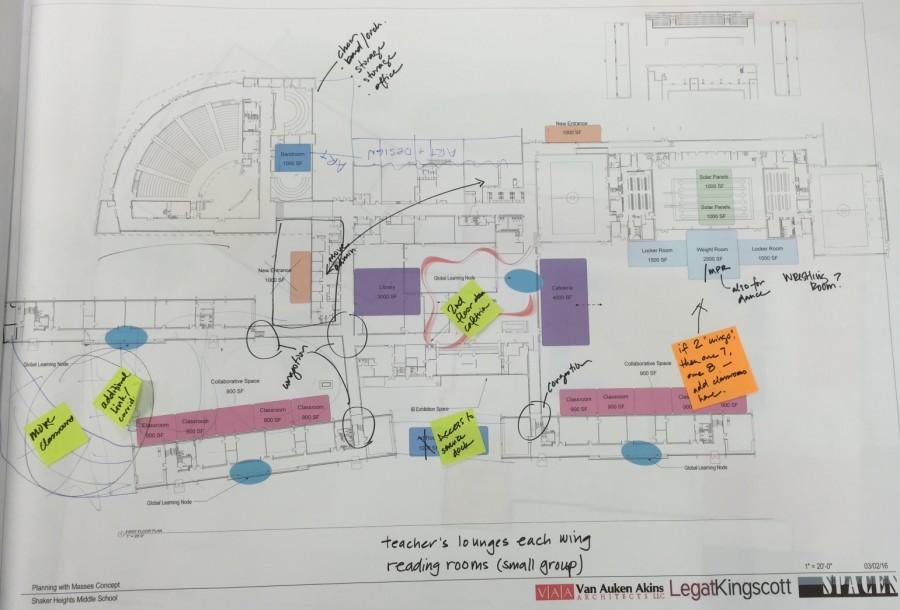 Colored squares and ribbons denote add ons in the blueprint for a possible reprogramming of the middle school.

Finally, some things were set in stone.

For the fifth of nine — four more were announced — facilities master planning sessions, four groups discussed four different district-wide concepts and possible improvements for specific schools under some of those concepts. These concepts were created with suggestions from previous meetings in mind. Everything else was tabled or deferred.

The concepts were displayed with red boxes — representing the schools — on maps of Shaker. On their way out, participants were told to put stickers — green, yellow and red — on the concepts they liked most, liked least and were impartial to. If the inconsistent markings were any indication of the group’s views, it was clear that such meetings don’t lend themselves to an easy conclusion.

Stephen Wilkins, assistant superintendent, began the session by defining the terms of discussion. He outlined the difference between a concept and an option — hint: concepts don’t consider money. He defined reconfiguration and reprogramming: rearranging the grade levels and reuse or add new spaces respectively.

Wilkins also explained the formula for determining the total cost of any renovation or construction for the district: “Individual school cost + Non-school cost = Total cost.”

Wilkins described the 14 principles developed from the Educational Visioning process where the contractors went through schools and held discussions to find out how Shaker’s families want to learn: excellence for all students, safety and security, holistic learning were some of the notable ones. These principles weren’t used.

Finally, he presented the concepts.

Concept 1: Build a 5-8 grade school on the middle school site with separate wings for 5-6 and 7-8. Repurpose the Woodbury Elementary School building as an administration building.

People were hesitant at first to ask questions, but, gradually, more and more concerns were raised. “How do any of the concepts help the middle school?” asked Ken Kangas, Woodbury physical education teacher.

“If you look at Concept 3, it says renovate all eight school buildings,” Wilkins responded. He suggested that Kangas choose that concept if he felt that the lower grades required attention.

“As a parent, there is a lot of concern with splitting up the grades. Has there been any information backing this decision?” asked someone else.

“That sentiment was raised,” Wilkins said. He again suggested that she cast her vote to reflect those feelings.

The concepts were meant to be fluid, but few felt that was actually the case. “So is pretty much any other idea off the table?” asked one crowd member. The lead architect insisted that the table was still open. But the tabled ideas — so called by the handout provided before the meeting — suggested that there were definitely some ruled out.

An early childhood learning building, two schools for grades 5-8, a ninth-grade academy separate from the high school and elementary schools through fifth grade were all concepts “deemed not feasible.”

The fact that some of the ideas from the last meeting were sidelined without much community input didn’t help. “I’m curious as to how the ideas were tabled,” Emily Shrestha, high school teacher and parent, said. “For example, I thought the idea of a ninth-grade academy could have been very useful.”

Some people expressed fear of the term renovation, and said they didn’t want anything to be “gutted.” Wilkins used these comments to transition to the next portion of the meeting.

Chris Dewey, one of the architects who came through the schools last November, stepped up to the podium next to explain what ‘renovation’ would really mean. “All the schools need new roofs, for the most part, they need proper heating and air conditioning,” he said.

Dewey explained that it would cost more than $170 million to bring the entire district up to state requirements — around 30 percent of the money would be spent on the high school. The state would match the district’s expenditures 26 cents to the dollar. That means the district would only have to raise $135 million more.

Even Dewey thought that repurposing was better than renovating.

“I’m a Shaker resident. I think that, ultimately, a new building for the middle school, rather than renovating that building is the best thing to do,” he said.

His suggestion, however, shared features with Concept 4, which suggests the renovation of the other seven schools as well.

Board of Education member Annette Tucker Sutherland wasn’t sure that renovations would work at all. “Renovations wouldn’t improve the programs with new science labs or performance areas. I don’t know if that’s the best option,” she said. “Part of my job is figuring out what people are excited about — a new high school, a new middle school — to convince them to vote for the bond.

“I don’t think the community will want to pay for renovations along with the reprogramming,” she continued. Only Concepts 1 and 2 don’t include renovations.

But there was a similar fear of reconfiguration — combining and separating grades. “The grade setup was one of the reasons I looked at this school system,” said one parent. “I like that.”

Superintendent Gregory C. Hutchings, Jr. agreed. “I think the system that we have now really works. In regards to grade configuration, it doesn’t really seem necessary,” he said.

Hutchings said he didn’t like Concepts 1 and 2. Tucker, a board of education member, didn’t like 3 and 4. Dewey, one of the main architects involved, pointed to 4 as a feasible solution. The crowd was divided.

Applause echoed through the upper cafeteria when the Concept 1 group noted that their concept kept the high school where it was. But the presenter expressed uneasiness about combining grades five through eight. “Everything — classrooms, principals, staff, buses — has to be different,” he said.

The idea of creating a flagship high school — as allowed for under Concept 2 — was intriguing. But nearly everyone was sure that Woodbury was not the place to house the administration.

Concept 3 was ruled the most benign. But it didn’t really excite anyone.

As for Concept 4: “It does address the newest building and has no historic value. People wouldn’t cry if it was taken down,” the group presenter said of the middle school. But parent Stan Szarek brought up a concern. “Our worst building is the newest one,” he said. “Won’t the newest one we build be the worst? The ones we have now are made to last.”

When voting for concepts, or visions for the entire district, 44 people chose Concept 4 as their favorite, making it most popular. Seventy chose Concept 2 as their least favorite. And 45 people put their yellow sticker on Concept 3.

People were a lot happier when, after the last of the four concept groups presented, they returned to the environments they knew best: the group of high school staff and parents by the vending machines, the Fernway group in the senior lounge and the middle school group near the far windows. Blueprints and aerial photos of each school were arrayed on tables.

The only difference was, these blueprints, albeit, abstract ones, were ideas for the future. “Where are the classrooms?” asked one participant upon seeing the high school first-floor plan. Someone noted that a library on the second floor of the high school was placed directly atop an outdoor learning space on the first floor.

Again, suggestions on Post-it notes littered the plans and the final concepts became suggestions. Some groups even went as far as to create their own. Kangas, the Woodbury athletics teacher, suggested a setup where elementary schools are for grades.

“I think we need to start looking at the concepts through a lens for which is most fiscally responsible,” Hutchings said. Although four of the seven terms of discussion and half of a slideshow were devoted to the fiscal aspects of the ideas, participants were urged to exclude cost from consideration during this meeting.

Ultimately, however, final renovation decisions depend on the budget. Said one participant, “We’re all worried about the cost because we have to pay the taxes.” Cost will be a discussion topic in the next meeting March 22.