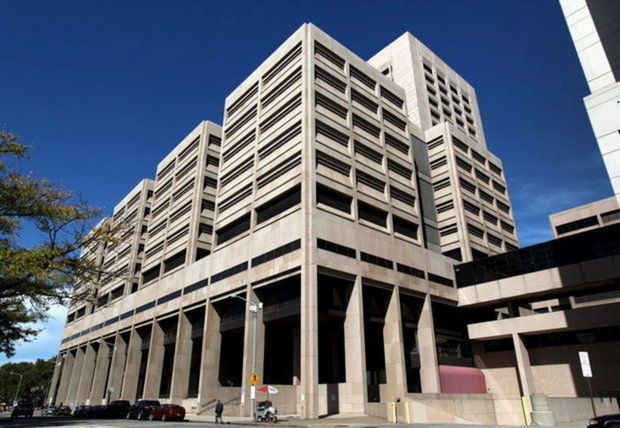 The Cuyahoga County Justice Center, where Mitchell pleaded not guilty at his May 9 arraignment.

This story was updated May 23 to correct information about salary for teachers who return from suspension.

Following Ohio law, the Board of Education placed indicted high school teacher Timothy Mitchell on suspension without pay May 9 according to Director of Communications Scott Stephens.

The social studies teacher was indicted April 25 on charges of sexual battery and summoned to appear in court.

Section 3319.40 of the Ohio Revised Code states that if a person employed by a school district is “arrested, summoned, or indicted” for certain offenses — including sexual battery — the school district must “suspend that person from all duties that require the care, custody, or control of a child during the pendency of the criminal action against the person.”

“It is not up to the discretion of the district,” said Dr. John Morris, president of the Shaker Heights Teachers Association and high school English teacher. “Once a teacher or anyone on that statute — and that includes coaches, that includes members of the clergy — is accused of that list of offenses, they are supposed to be separated from that organization immediately.”

Separation requires the withdrawal of pay. “You still have a relationship with that organization if they are paying you,” Morris said.

On May 9, the day of Mitchell’s arraignment, the Board of Education followed this mandate. The withdrawal of pay was retroactively applied starting April 29, when Mitchell was first processed by the clerk of courts.

With suspension, rather than termination, Morris said, “the benefit is that it keeps a placeholder for that employee in that organization. They still haven’t lost their job.” In the case of a not guilty verdict, the normal path for the school to take would be rehiring Mitchell, who would return to his previous salary, Morris said.

At his arraignment last week, Mitchell pleaded not guilty to sexual battery, a felony of the third degree.

Sexual battery can also occur when “the offender is a teacher, administrator, coach, or other person in authority employed by or serving in a school” and “the other person is enrolled in or attends that school.”

According to cleveland.com, prosecutors say that in 1995, 36-year-old Mitchell took a 16-year-old student to a baseball game, bought her alcohol and gave her marijuana. After the game, they claim, he had sex with her.

If guilty of this offense, mandatory sentences range from one to five years in prison. Additionally, Mitchell’s teaching license would be automatically suspended by the state board of education.

If a not guilty verdict is passed down, Mitchell still faces an Ohio Department of Education investigation. “Typically, the ODE does not contradict what a court of law finds,” Morris said. “However, the ODE can find wrongdoing in actions that a court of law might not see as a reason for a charge.”

The website also states, “Discovery-related procedural protections include the right against self-incrimination and the right to confront witnesses.”

Multiple pretrial hearings and the rescheduling of pretrials is typical in criminal cases.

Ryan Miday, director of communications and public policy for the Cuyahoga County prosecutor, could not comment in time for publication.