After Dr. Glasner announced the decision to hold virtual graduation, some students and parents were upset 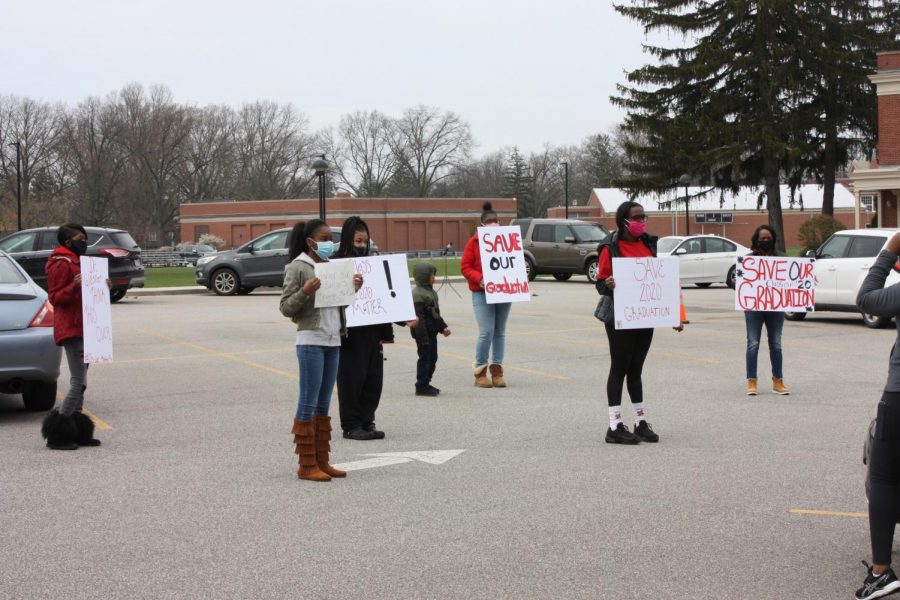 Students and families protest April 24 in the administration parking lot.

About 12 students and adults gathered at the district administration building Friday at noon to protest virtual commencement.

The protest was promoted via text and social media. The protestors intended to observe social distancing guidelines. “We will all stand arms distance apart at all times,” the message stated.

The message encouraged students to wear Shaker attire, make posters and share the event with as many seniors and parents as possible. The Shakerite could not confirm who composed the message.

The protest comprised six students and their families gathered in the parking lot of the administration building for about 45 minutes. Protesters displayed signs to voice their concerns. Some of these signs read, “Save Our Graduation,” “Class of 2020 Matters” and “Dr. Glasner Thinks This is Over. #Do We Matter?”

Senior Kyra Kennedy was among those who protested. “Who wants their graduation on a computer screen? That’s boring,” she said.

The district announced Virtual commencement April 21, after Gov. Mike DeWine announced school closures through the end of the school year and continued social distancing. The following day, the Ohio Department of Education announced “Congregate graduation ceremonies should not be held.”

About six TV news crews were set up along the edge of the administration building parking lot in anticipation of the protest. Senior Samira Smith spoke with Fox 8 News. “I would like to see us 6 feet away, and we can still have our caps and gowns on and do something, at least do all the safety guidelines,” she said.

“I have been dreaming about it since watching my older cousins graduate from school,” Smith told Fox 8. “I just couldn’t wait until I’m that one to go and finally walk across that stage and get my diploma.”

“Some of us feel like we wasted our time and effort for 12 years because we don’t get to walk across that stage,” Kennedy said in an interview with a Shakerite reporter.

While DeWine’s and ODE’s decisions leave no other options for graduation ceremonies, some students feel neglected and upset.

Senior Brooklyn Williams participated in the protest. The day before, she told The Shakerite, “It’s such an important milestone in our lives that is just being taken away. The way that it was presented to us was kind of unfair.”

Six police cars were stationed nearby during the protest: by the administration building, the North Gym lobby, Parkland and Lee roads, Onaway Elementary School, on the oval near the main entrance to the high school, and North Park and Shaker Boulevard.

Senior Louise Spadoni passed the protest while on a run and was surprised that it was taking place. She was was also surprised by the small amount of participants. “I had no idea the protest was even happening until I ran past it because I thought that the school had done a pretty good job handling it as best as anyone could do in this pretty absurd time,” she said.

Principal Eric Juli explained in an interview yesterday that he respected the students’ decision to protest but he would have prefered they did not.

“I think that there are ways to tell me what you are upset about without putting people in danger,” Juli said.

Juli also believes that virtual commencement is the safest option but is open to the possibility of a ceremony in the summer if it is safe. “We are gonna try to make this the best virtual graduation that has ever happened. If there is an opportunity to do more later in the summer we will absolutely do more,” he said.

Senior Caitlyn Shelley said she did not support the protest but understands the frustration and confusion her peers are feeling. “We are told for 13 years that we are working toward this moment where we walk across the stage and receive our diplomas,” she said. “Feeling like there was little to no communication between the administration and the majority of us seniors as to our opinion on what we want made things more upsetting.”

“We’re all disappointed, but it’s for our own safety and we’ll all get the diplomas anyways,” Bowne said. “If we want to protest something, let’s be activists through the media and through writing instead of risking the livelihood of others and being disrespectful of government orders.”