The fire, which began on the roof, intensified toward the middle of the day, and caused "significant damage" 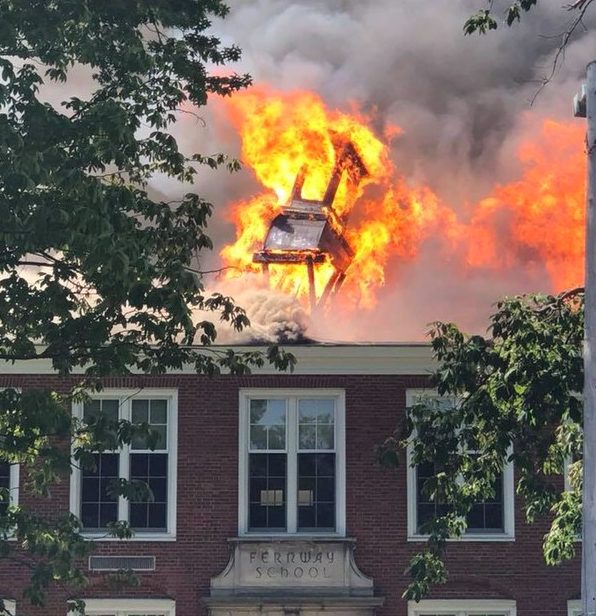 No one was hurt in a fire that destroyed the roof of Fernway Elementary School this morning.

At 1:40 p.m., the district website stated, “The Shaker Heights Fire Department and assisting units from other communities are still at the scene of a major fire at Fernway Elementary School.  A small number of staff members were in the building and were evacuated safely. In the coming days, they will assess the damage. Likewise, District officials will assess the damage and formulate necessary contingency plans for the coming school year.”

The fire began this morning, sometime between 11:00 and 11:30 a.m., according to Executive Director of Communications Scott Stephens. There were no summer programs, classes or students present in the building at the time of the fire. During the 2017-18 school year, 329 students were enrolled at Fernway, one of Shaker’s five elementary schools, in grades kindergarten to fourth.

“We just saw thick smoke,” Fernway custodian Kenny Pikus said. He and other staff members who were on the first floor of the building when they saw smoke evacuated immediately.

Stephens said everyone who was in the building exited safely.

“I didn’t think it would get this bad,” Pikus said. The Shaker Heights Fire Department is still at the scene, and as of about 1 p.m., the fire was still burning.

According to Stephens, roofers were working on the flat roof above the Fernway gym and library today and yesterday. The district has not yet confirmed the cause of the fire.

Fernway’s flat roof replacement was one of the many construction projects taking place over the summer. Onaway and Woodbury are also scheduled to have their flat roofs replaced.

According to Ohio Administrative Code 1301:7-7-14, titled  “Fire Safety During Construction and Demolition,” “there shall be not less than one multipurpose portable fire extinguisher … on the roof being covered or repaired.” Stephens said did not know whether the an extinguisher was present on the roof.

Fernway was built in 1927. In the 1940s, part of the roof was renovated with slate tiles, according to first grade teacher Selena Boyer, who arrived at the school after the fire had started.

Though residents stood nearby as smoke rose from the building at first, wind soon blew the smoke toward nearby houses, and the SHFD advised spectators to stand back in order to avoid inhaling the tar in the smoke.

Stephens does not yet know when or if the school will reopen in the coming year. “We will be meeting later today to start those discussions in terms of what to do with the Fernway kids and staff. We’re going to bring our cabinet and start talking about that, and typically people come up with ideas,” he said.

Community members expressed sadness about the fire. Lillian Potiker, a rising eighth-grader at Shaker Middle School who attended Fernway said, “I feel bad for the teachers, who have been in the building for years. It’s sad for the community as a whole.”

Chloe Brown, also a rising eighth grader, watched as Fernway continued to smoke. “I feel bad for the kids, because they could have to move around schools, or they aren’t gonna be where they love to be and where they want to be — closer to their homes,” she said. “It’s a tragic mishap.”

“It’s obviously very sad for everyone,” Stephens said. “It’s going to cause a lot of inconvenience for students and staff.”

Boyer does not think the school can reopen come August. “All these second floor people — I can’t imagine they have anything left. We keep everything in our rooms during the summer. If my room were to go —  it’s your whole world,” she said.

This is the second fire in the Shaker schools this year. The first occurred May 11 at Shaker Heights High School. The fire was confined to a single classroom. No one was hurt, but AP testing occurring at the time was disrupted because of the evacuation.

In response to the fire, an informal Fernway Facebook group has mobilized a #RebuildFernway campaign to rebuild the school at the same site. They plan to send a group of representatives to a Shaker Heights City Planning meeting that takes place tomorrow from 7-8 p.m.