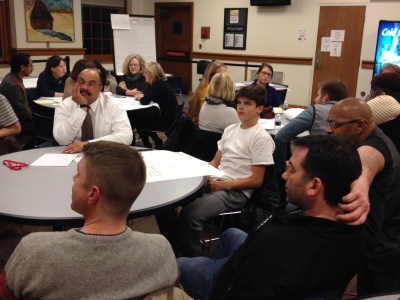 The same number of teachers, 43, and community members, 48, gathered each night in the upper cafeteria to discuss Shaker’s vast architectural complications.

Before splitting into groups to discuss their ideas, representatives from Shaker, Legat Kingscott — the architects — and Brain Spaces — the facilitators already paid $83,871.88 this fiscal year — spoke for 55 minutes about the expectations for the evening. “Tonight,” Stephen Wilkins, assistant superintendent, said, “think about the future of Shaker Heights Schools.”

Groups were designed by building: the high school’s staff and parents by the vending machines, Fernway’s in the senior lounge, the middle school’s near the far windows. Blueprints and aerial photos of each school were plastered on tables. Though widely dispersed, most groups talked about similar things.

They asked for air conditioning.

And most often, they asked for space — eco-friendly, flexible, usable space.

But none of the teachers, community members and few students in attendance were confined to such topics. As ideas were tossed around, facilitators scribbled them onto huge, 25-by-30 inch easel pads. Most groups had pages and pages of bullet points and suggestions by the time they went to present.

“There are so many ways we could utilize areas for underground parking,” Interim Principal James Reed III said. “We’re landlocked, you either go up or down.”

Chief Custodian Sean Brown is looking forward to HVAC — heating, ventilation, and air conditioning — and structural upgrades. “It’s going to take some time to figure out…but with a modern building, there’s bound to be less maintenance necessary,” he said.

Participants also showed concern for the athletic programs. “The facilities don’t support multiple sports team practicing and playing at the same time,” Reed said. “There are kids arriving at six o’clock in the morning for practice and some at eight in the night.” Some suggested a dome over the high school turf field or lights, others, a fitness room with treadmills, ellipticals, etc. shared by students and teachers.

Reed also identified the semi-unavailability of technology. “Some rooms don’t support technology at all, they have two plugs,” he said. “When Mr. Moore and I were here, we only needed two plugs, one for the light, one for the fan. Not today.”

Sylvester Moore went to Shaker with Reed — they graduated in 1971 — and attended both meetings. He was there because his granddaughters are now in Shaker schools and he’s a Shaker taxpayer. Midway through the initial speech he approached a non-occupied facilitator and asked, “Who’s paying for this?” voicing a concern of many — follow up interviews with Legat Kingscott employees failed to reveal any information about the cost or the proposed time frame for carrying out plans.

“I don’t mind the vision, but don’t tell me we’re old and can’t do anything,” Moore said. “Vision is great, technology is great, moving forward is great, but don’t insinuate that if we don’t do these things, we won’t be a great school.

“Even in its darkest times, Shaker looked out for me, my family, for everyone. We can’t lose that now,” he said.

James Schmidt, science teacher, turned the conversation towards the middle school. “We should give them the high school, knock down the middle school and build up a nice new facility there,” he said. Many in the group agreed. “It’s the Brady Bunch house of middle schools,” Marc Enie, physical education teacher, said.

“It looks like it’s for controlling middle schoolers as opposed to promoting [International Baccalaureate] learning, all those choke points,” a future parent said. “There’s no community there.”

“This is the only building,” another participant said, “where you walk in, look around and say, ‘What were they thinking?!’”

As minds strayed, the conversation moved to non-architectural possibilities for the high school: daily TV announcements, Netflix under specific circumstances, expedited lunch lines. “We’re hoping to have an express lunch line in this year so we don’t need to worry about that,” Reed said.

Freshman Wyatt Sweeney was not impressed with most of the propositions, especially underground parking. “It’s a remarkably stupid idea,” he said. He was also hesitant about adding a fourth floor. “Adding more won’t really help,” he said. “The building is hard enough to navigate as it is.”

Dennis Paben, a Legat Kingscott project architect was not so sure. “At this point in the process,” he said, “there is nothing that is outside of the realm of possibility.” Time travel?

The next meeting is Feb. 3 — then Feb. 16 and March 2 — and all students who attend will receive AP Government credit.