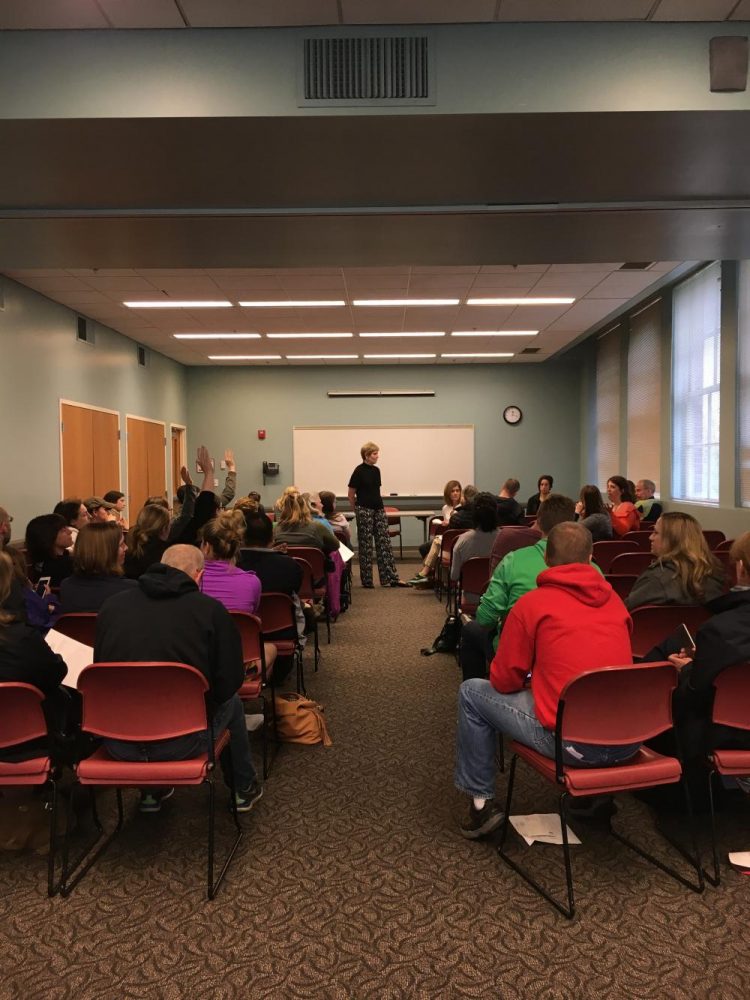 Assitant Superintendent and Director of Curriculum and Instruction Dr. Terri L. Breeden responds to questions from upwards of 50 community members during a discussion at Shaker Heights Public Library Saturday, April 29.

Last updated at 2 p.m. May 5, 2017 to clarify names of those who made the science lab decision.

According to Breeden, the team that works on the strategic plan – including school principals, Breeden and Director of Curriculum Amy Davis – made the decisions.

The announcements came as a surprise to community and staff alike.

News of the change came to parents’ attention, leading some to locate a document about it online. The statement was page three of a memo to the school board found in an online Board Packet for the week of April 10-13. The first two pages comprised links to education stories in the media and shaker.org articles about student achievements. The third page detailed the science lab and coordinator decisions.

The hands-on lab experiments  K-4 students participate in there — including owl pellet and cow eyeball dissections — are remembered fondly by high school students and valued by parents. Two parents who attended the meeting were moved to tears while voicing their sadness about the changes.

“I decided to organize the meeting because I was alarmed by the seemingly abrupt decision made by the Shaker schools administration,” said Shaker alumna and parent Katie Wozniak. She originally planned to open her home for the discussion, but after an overwhelming response to her online RSVP, the discussion was held in a meeting room at Shaker Heights Public Library.

The community members who attended the Saturday meeting — 13 of whom were Shaker teachers — shared Wozniak’s concerns. The floor was open for questions, which Breeden and Davis responded to in turn.

Before taking questions, Breeden explained the administration’s decisions. She distributed two documents: one depicting Ohio’s state science requirements on one side and a list of elementary field trips on the other, also providing contact information for Breeden and Davis; the second a form to submit any questions unanswered by the end of the meeting.

“I have consciously tried to be a good communicator, and I want you to help with that,” said Breeden. “I don’t mind answering your questions; I’m glad to answer your questions. I learn from you.”

In her explanation, Breeden cited “troubling” scores on the Ohio Science Tests for grades 5-8 as reason for modifying science curriculum. “I know some people wrote me and told me, ‘Don’t just look at numbers,’ but we have to look at numbers,” she said.

She supplied a few copies of the score reports to the room that compared Shaker’s scores to those of Beachwood, Chagrin Falls, Orange and Solon students. Shaker’s Fifth grade science’s 73.6 score is 22.4 points lower than Solon’s, the latter scoring the highest out of the five districts. Solon also scored the highest in eighth grade science with 93.8 points, 24.4 points higher than Shaker’s 69.4 score.

The sheet also included Shaker Heights High School’s Advanced Placement science test scores, which are notably higher than the fifth through eighth grade scores. One community member objected to this comparison, noting that  the high school scores emerge from a smaller pool of AP-only students, while the scores Breeden compared them to represent performance of  all fifth through eighth grade students in the district.

In the initial statement posted online, Breeden asserted that the administration does “value the hands-on-science experiences for our students. We will be working with teachers to provide hands-on science lab materials for each Primary Years Programme unit in each K-4 building, possibly through portable labs,” she said in the memo, which was addressed to board members.

In an updated statement in a Board Packet for the week of April 17-21, Breeden addressed reasons for these changes.

“The new model enables nearly all of the wonderful hands-on experiences students have enjoyed this year to be provided in kits/carts. Additional hands-on science labs will be developed with science experts and teachers, and support will be provided for the implementation of lessons. When additional resources are needed, they will be provided.”

At the discussion, Davis and Breeden both stressed that the purpose of the changes is to increase hands-on science experiments for students. “We want hands-on activities for our kids — period,” said Davis at the discussion.

According to Breeden and Davis, the Woodbury labs will be replaced with in-class lab kits, which include materials for science labs as well as instructions for the classroom teachers who will be expected to set up and deliver the lab lessons.

Two consultants are expected to assist elementary teachers in finding the best science kits. Neither was named at the discussion. One is from Case Western Reserve University, and the other from Vanderbilt University. The latter worked previously with Breeden on National Science Foundation grant.

“Science is not a comfort level for every teacher, and we really don’t expect elementary teachers to be a master at everything,” said Davis. “The idea is then bring support in the form of a human body coming in to plan with them, plan hands-on activities whether they’re outside the building, inside the building, inside the classroom,” she explained, describing the two consultants’ future roles.

The third change is the “repurposing” — as it is described the initial online memo — of K-4 science coordinator position to a curriculum and instruction technology specialist. While the former position was held by a teacher who interacted directly with students, the latter will be someone who trains teachers district-wide to be technologically efficient. This training will help create a “curriculum repository,” where lesson plans will be electronically shared.

Their explanations were met with more questions than the hour allowed. The community’s chief concerns and inquiries regarded the lack of teacher involvement during the decision-making process; how much these decisions will directly, positively affect students; how necessary any of the changes truly are; lack of administrative transparency and communication in general regarding the decisions; and the loss of the Woodbury lab experiences.

The proposed bond issue to be voted on Tuesday, May 2 was also raised at the discussion. “You want us to pass a levy, but you’re breaking trust in the community, because you’re rolling something out and blindsiding everybody,” said one attendee.

When Breeden voiced that she didn’t believe she had “blindsided” anyone with these decisions — quoting the word many in attendance had used to describe the administration’s communication of the decision — there was an instantaneous roar of disagreement from attendees.

Breeden did admit faults communicating with parents, especially regarding her online Board Packets. “When I wrote that, I was writing to a governance, policy, well-informed school board member. I should have written it and given a lot more rationale,” said Breeden.

The room grew louder when teachers’ exclusion from administrative decision-making was brought up in the discussion.

Bill Scanlon, high school science teacher and treasurer of the Shaker Heights Teachers’ Association, clarified a rumor regarding teachers’ involvement. “I want to make it clear: the SHTA did not endorse this decision,” he said.

Some parents suggested the changes be implemented slowly over the next two years, allowing teachers and administration to work together and determine which lab experiences really benefit children’s learning.

Breeden collected sheets with unanswered questions or comments at the end of the discussion.

Most, if not all, of those in attendance left unsmiling and seemingly unsatisfied by the discussion.

“‘More’ only matters if it’s quality,” said Shaker parent Maura Friguglietti, regarding the plans to increase lab experiences in class. Others echoed her concerns, unconvinced that any number of in-class lab kits will replace the Woodbury lab experience.

“While I want to thank Dr. Breeden and all of the attendees for taking time out of their weekend to come to the meeting, I, unfortunately, feel like I did not get a lot of the answers I was looking for,” Wozniak said.

“The only way I see this being resolved is if all sides are able to understand the other, and if transparent conversations are had,” she continued. “Right now, I feel like the administration’s seemingly lack of ability to understand parent concerns and frustrations — as well as teachers’ — is only going to harm our kids. That is not what we want to have happen.”