Elementary Chinese to be Replaced with Spanish 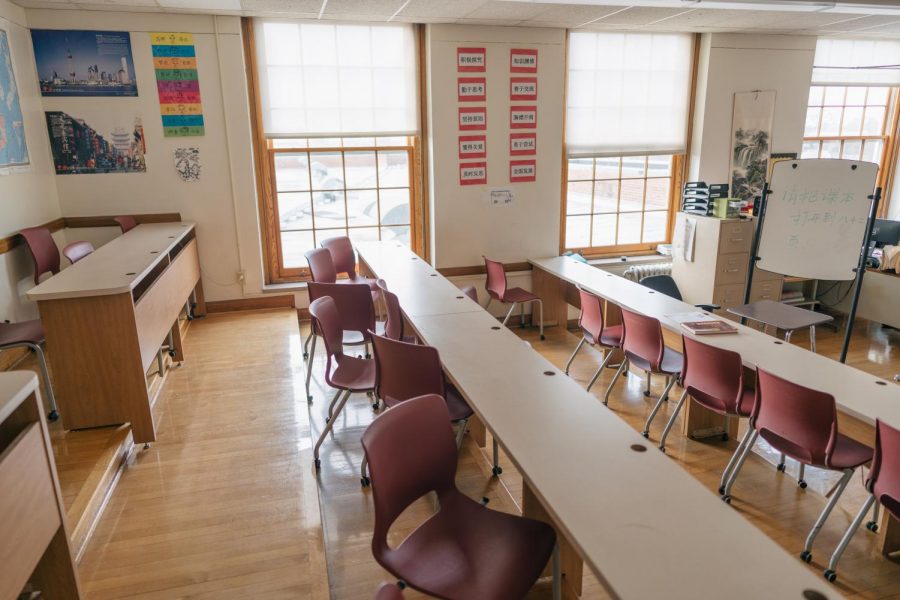 Chinese instruction takes place at the high school each day in room 311.

The reasons Glasner and Robinson cited for the change echo criticisms of the program that The Shakerite documented in March 2012 in its inaugural Investigations effort. The related stories were reported primarily by the Journalism II students Shane McKeon (’14), Marcia Brown (’15) and Taylor Butze (’15). The investigation was prompted by a Woodbury student, who wrote a letter critical of the district’s approach, gathered 80 signatures from peers and sent it to Dr. Randy Yates, former Woodbury principal, now retired. The Shakerite also published the letter.

Below, the 2012 coverage has been compiled to make the package more accessible to readers.

Shaker’s Chinese program was born out of necessity and opportunity. The district needed to fulfill a world language requirement for the International Baccalaureate program, and the Chinese government offered a solution.

Through an exchange program, the Hanban (Confucius Institute Headquarters) worked with the Chinese Ministry of Education to send Chinese teachers to Shaker Heights, providing an economical opportunity to fulfill IB world language requirements.

Hanban paid the teachers’ salaries in full, while Shaker paid for fringe benefits such as transportation and housing. This provided Shaker with cheap and native Chinese teachers. “We couldn’t have done the IB program without them,” said Assistant Superintendent Bernice Stokes. “Hanban covered the cost.”

As the Chinese language program continues, the payment plans change. According to district treasurer Bryan Christman, the Hanban Chinese teachers receive a new teacher’s salary of $43,000. “Hanban pays $13,000; we pay $30,000,” Christman said. Next year, Shaker will pick up the remaining $13,000 on the tab, making the teachers fully district-paid. The teachers will be responsible for their own housing and transportation.

Despite Woodbury students’ criticisms, Stokes sees the Chinese classes as a curricular improvement. She explained that social studies is a part of the Chinese curriculum. “Teaching the Chinese culture is a big part of the language. The social piece is very important.”

High school students taking Chinese seem to feel positive about the language, despite what their younger counterparts say. “Chinese is a great class. Ms. Li is a great teacher,” sophomore Alexandra Gaines said.

The Challenges of Learning Chinese

Chinese instruction for elementary school students was added to meet the IB Primary Years Program language requirement, as “schools must provide instruction in the learning of a language other than the principal language of instruction of the school from the age of at least seven.”

The American Council on the Teaching of Foreign Languages recommends elementary school students experience language instruction 3-5 days per week for 30-40 minutes per class. Shaker students in grades 2-6 experience one hour of Chinese instruction once per week, and first graders have 45 minutes per week. Chinese classes replace a “special” class such as art or music one week and a social studies class the next.

Correction: In an earlier version of this post and in the print edition of The Shakerite, the article misstated the frequency of weekly Chinese instruction for students in grades 2-6. It is once per week, not twice.

The writer argued the value of social studies classes in comparison with Chinese lessons. In comparing Woodbury’s social studies curriculum to its Chinese curriculum, the writer stated, “In Social Studies, we learn many useful things, like what the 50 states are, what the 13 colonies were, and where the Rocky and Appalachian mountains are. These things we could really use during our lifetime, whereas when are we ever going to sing a song about colorful lanterns?”

The 2007 Ohio Core Curriculum Bill worked to expand Chinese programs in high schools across Ohio, and Ohio schools received a grant of $100,000 from the U.S. Department of Education in 2007, which helps to cover the costs of school districts in Ohio that teach Chinese.

In 2009, the Ohio Achievement Assessment test in social studies was eliminated due to budget cuts, with the result that districts have begun to place less emphasis on that part of the curriculum.

“One thing that has happened since the passing of No Child Left Behind is that in some school districts, social studies classes have been reduced because the state only tests in English and math,” said Michael Charney, director of Ohio Youth Voices.

Woodbury students who signed the letter think Chinese classes waste school time and believe that the program is not effective. “We don’t learn. Watching YouTube videos, doing crafts, and playing Chinese games on the computer isn’t going to help us speak Chinese,” the letter stated.

Shaker Superintendent Mark Freeman hopes to adapt the program to align it with the students’ requests. “We are taking steps to deal with these objections to make sure the program functions properly,” he said.

Freeman said he would prefer not to cut social studies classes, but that the short school day at Woodbury – about half an hour shorter than a school day at the high school – does not leave much flexibility. He said that the administration is working on lengthening the school day and that the Woodbury staff wants to expose students to more world languages, specifically French, Spanish and Latin, the languages offered at the middle school.

However, a longer school day would require a new agreement with the Shaker Heights Teachers Association. SHTA President John Morris said that only the starting and ending times of classes could be adjusted at this time because SHTA negotiates a contract every three years. Although contracts cannot currently be renegotiated to include a longer school day, changing class times could accommodate added periods in the day to teach languages in the elementary schools.

The students’ letter further argued that social studies classes are more valuable in the long term than Chinese classes. “In Chinese, we aren’t learning anything that may one day help us be bilingual,” it stated. “In Social Studies, we’re learning things that will educate us in the history of our country and what’s going on in our world.”

The letter writer hits a sore spot with that argument. Last May, the New York Times published an article describing the results of a study that showed that only a quarter of fourth- to twelfth-grade students were proficient in civics. The remaining three-quarters remain ignorant of facts relating to American government and history. At the same time, Shaker is cutting one social studies lesson every other week from elementary students’ school days in favor of Chinese instruction.

The Chinese program is trying to establish an internationally aware community through education and communication. However, the students are having trouble ignoring what they perceive as wasted education time.

Despite their negativity, the students in a sixth-grade Chinese class on Feb. 22 seemed to understand much of what teacher Jen Hu-Yan said. Nevertheless, the student letter to Yates called for “confident teachers, preferably with experience running the class.”

When Shaker applied to participate in the Chinese teacher exchange program, it hoped for a brighter bilingual future for its Woodbury students. One Woodbury 6th grader, however, may have summed up student feeling by concluding, “Chinese is weird.”

Mastering One of the Toughest Tongues Takes More than 2,000 Hours of Study

Employed within the district are eight native Mandarin Chinese speakers who teach students in various grade levels. In grades K-6, students are introduced to the language, learning basics conversational words while learning about cultural and historical aspects of China. These students meet with a teacher once a week for an hour, alternately replacing a social studies or “special” class such as art, music and physical education.

In a Feb. 22 Chinese class of 23 sixth-grade students, four indicated they would take Chinese at the middle school. Middle school students choose a language to study in seventh grade, and meet for one class period each day. As in years past, options include Latin, French and Spanish. Next year, the middle school will offer Chinese as well, although two middle school guidance counselors said they are uninformed about the details involved. Chinese is not included in the 2012-2013 middle school program planning guide.

The high school currently offers Chinese I through Chinese IV. Altogether, 46 high school students are currently taking Chinese, and some classes are very small. The Chinese II class only has nine students.

Studies show it is easier to adopt a second language at a young age. The American Educational Research Association, states, “For young children, starting early can lead to mastery of a foreign language . . . only if it is taught through a well-developed form of total immersion instruction. A program consisting of a few hours of foreign language teaching per week is not enough.”

So how much time is needed to learn a complex language such as Chinese? The U.S. State Department ranks Mandarin Chinese as a Category 3 language, a group that comprises, arguably, the “toughest” languages for English speakers to learn. The AERA estimates that to master these languages, a student needs 2,200 hours, with about 1,100 spent in a country with native speakers. This standard contrasts with Shaker’s program, which does not have any immersion aspects, and at one hour per week, would require more than six years to accumulate the recommended hours.

A child will also pick up a language more quickly if it is practiced in the home as frequently as possible. Three of the 23 students in the polled sixth-grade classroom indicated their parents sometimes help or encourage them with their Chinese practice.

At the elementary level, a typical Chinese class is interactive. Jen Hu-Yan, one of the guest teachers here from China, taught Woodbury students about Chinese money on Feb. 22. Before getting into the language itself, Hu-Yan discussed the history of Chinese money and its value. She showed them how to use what they knew to ask or say how much something costs, and taught other phrases associated with buying and selling.

In the high school, students find that it is hard to learn Chinese. “I’ve taken three years of Chinese, but I’m in Chinese four,” said senior Alexis Moten. “I don’t know all the characters yet, but I need to know them for the final!”

The cultural appreciation aspect of Shaker’s Chinese curriculum may prove more valuable than the language itself. Michael Charney, director of Ohio Youth Voices, an organization promoting students’ opinions on curriculum decisions, argues this viewpoint. He said the Chinese language program “is more of a way for collaborating for future international cooperation instead of just education.”