Records provide further insight into due process claim by SHTA 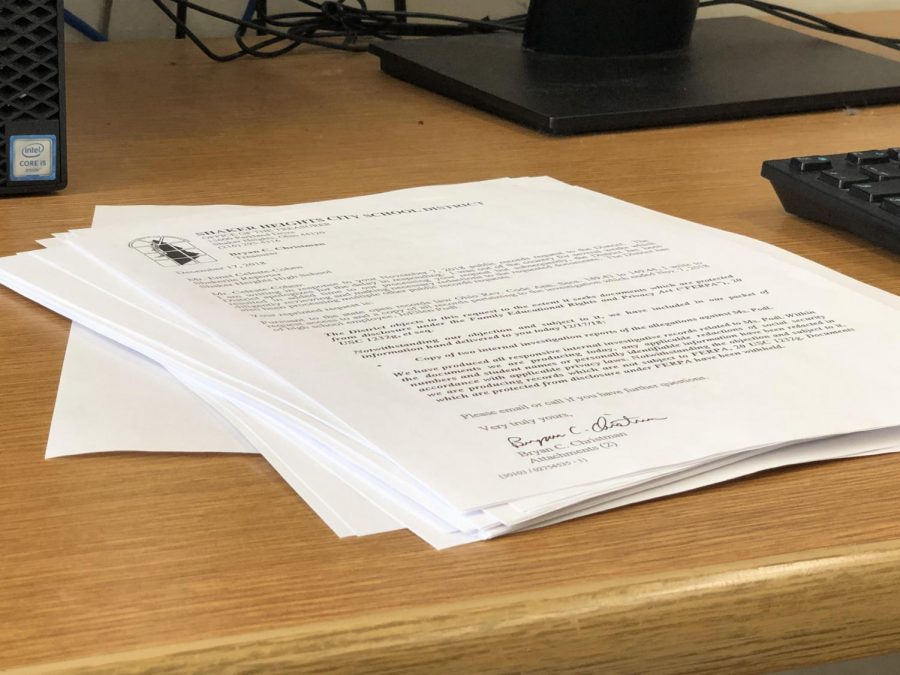 This story was updated at 10:10 p.m. to include the form and number of documents and pages provided by the district.

Documents obtained by The Shakerite support the allegation by Dr. John Morris, president of the Shaker Heights Teachers’ Association, that administrators did not request or allow a response from high school English teacher Jody Podl about student statements the district used to justify a formal reprimand.

The Shakerite filed the public records request Nov. 7. The request specified receiving the documents in digital form if possible.  The district provided hard copies of 21 documents, which comprise 116 pages, Dec. 17.

On Nov. 8, the SHTA filed a grievance with the district on the basis of academic freedom, communication and lack of due process for Podl. It was the association’s first over due process. After failing to resolve the grievance, the district entered into arbitration with the SHTA.

Records show the investigations ensued after a complaint sent via email by the parent of one of Podl’s students to Kuehnle and other administrators Oct. 4. The parent claimed that on Sept. 24, Podl “publicly questioned [their child]’s capabilities and expressed concern over [their] poor class performance after [they] failed to turn in an assignment.”

According to the documents, Podl called the parent after class to explain these concerns. The student had already called her parent to explain the situation. Podl confirmed the student’s characterization of events and apologized. She visited the student during another class later that day to apologize and sent another email to the parent reiterating the apology.

According to a timeline compiled by the district and included in the documents requested, Podl was placed on leave after Kuehnle spoke to the parent by phone Oct. 8 and Robinson interviewed the student Oct. 9. It is unclear who made the decision to place Podl on leave.  Scott Stephens, executive director of communications, said that only the superintendent and assistant superintendents have the authority to place a teacher on leave.

Morris said the decision to put a teacher on leave based on such a complaint is unprecedented. “In my 22 years at the high school, I’ve never known someone to be placed on paid administrative leave over one comment to a student that is completely free of blatant aggression, racial overtones, impropriety,” Morris said. “This is completely an outlier.”

Stephens said the district does not have a policy outlining circumstances that merit administrative leave, and such decisions are made with “administrative discretion.”

Podl was interviewed by Robinson and Kuehnle Oct. 12, the only instance when Podl was asked to respond to a complaint. During the meeting, which focused solely on the parent’s complaint, Podl stated that she had left a phone message with the parent earlier this school year voicing earlier concerns about the student’s performance. Kuehnle was present during the interview but asked no questions. Throughout both investigations, neither Kuehnle nor Breeden interviewed or sought written statements from Podl.

“There was no questioning of Mrs. Podl,” Morris confirmed.

Breeden’s final investigation report states that over the following seven days, Oct. 12 to Oct. 19, Kuehnle compiled written statements ‒ not provided to The Shakerite per the records request ‒ from four other students and, on Oct. 22, he gave Breeden a draft of his report for review. Breeden took 14 days to review the report. No documentation of this review process was provided.

“It’s our belief that she was afforded due process,” Stephens said.

On Nov. 5, administrators met with Morris and Podl to “share administrative actions based on the allegations.” There are no records showing Podl was asked to respond to the other students’ comments before or during that meeting. Podl was directed to “treat students in [a] professional manner in any and all contact she may have with them.” She was directed to attend a Nov. 7 restorative practices meeting with students and parents; there is no indication of whether this meeting took place. Lastly, she was notified that the administration would “undertake efforts, including classroom observation, to ensure her compliance with Board policies.”

Despite Breeden’s reprimand of Podl, Superintendent Stephen Wilkins apologized to her, the students and their families for the administration’s actions in this case through a Nov. 13 statement published at shaker.org. “We should have quickly reviewed the matter and immediately implemented restorative practices,” he wrote.

“In addition, I am reviewing the performance of Principal Kuehnle and Assistant Superintendent Breeden in regards to this important matter. They did not live up to my expectations for how to process such reviews. I will take any appropriate corrective actions pending a thorough examination” Stephens stated.