Travel to Fiji, Greece, Costa Rica and Puerto Rico canceled due to COVID-19 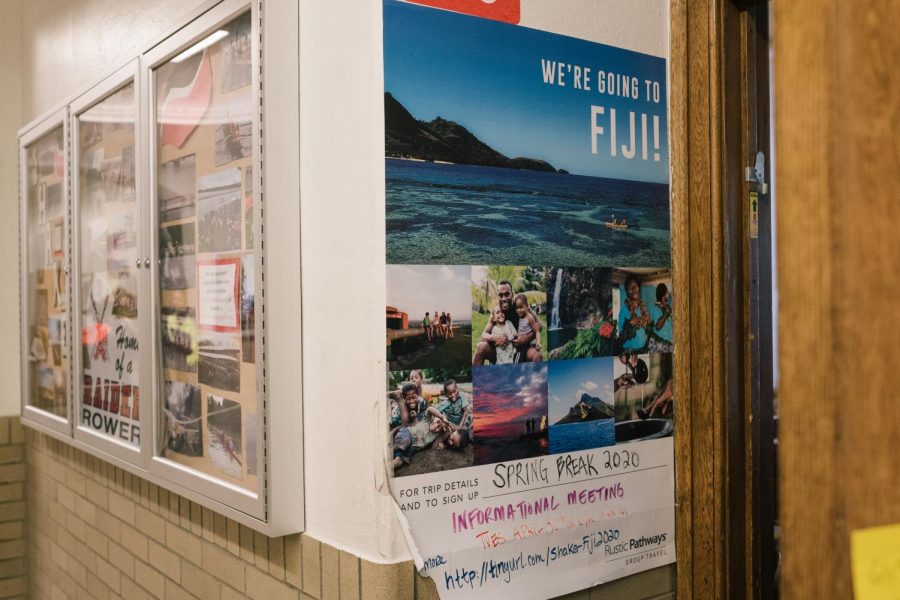 “I worked to pay for half of it, so that’s obviously upsetting. But I’m honestly more sad about not being able to go,” said senior Chloe Friedland, who would have left for Fiji March 17.

In the second significant COVID-19 announcement in as many days, the district has canceled all domestic and international spring break travel.

In an email sent to families and students at 4:53 p.m., Dr. David Glasner, superintendent, announced the cancellation of all international and domestic travel until April 1, 2020. He said that the decision was not easy to make and that the district is working with travel providers on securing refunds for students, parents and staff.

“Our concern is always with the health and safety of our students and staff,” Executive Director of Communications and Public Relations Scott Stephens said.

“It’s a big deal to cancel. We want to weigh the safety and caution of it, but also the fact that the trip is a very big deal to students and parents,” Stephens said. “It’s really a tough balance, very tough balance.”

Nora Murphy, a Greek and Latin teacher, helped organize the Greece trip. She said the trip was important to her because it would allow students to see their learning in action and expand their classroom.

She said the cancellation is no one’s fault, but it is upsetting. The decision creates a “lost opportunity, particularly for our students. I obviously have the opportunity to go again; I’m an adult,” she said.

“Safety comes first. But we know everybody is excited. We know people have been working very hard on it. We know that people have spent money to go on these trips,” she said. “There’s a lot of things to consider.”

Because of COVID-19, student trips to the United States are being canceled, too.

A group of Japanese exchange students was scheduled to stay with host families throughout Shaker and Beachwood, but the exchange was canceled after Japan closed all of its schools for a month.

Spanish teacher Amy Fogerty was the primary organizer of the Costa Rica trip and said that it meant a lot to her.

“I spent two years planning for it, and I believe travel changes students,” Fogerty said. “And the seniors that were on this trip have been with me, most of them, since their freshman year, and I’ve worked really hard to be able to make something like this possible.”

She said that the students are probably devastated. “I’ve been crying for three days. It’s sad, it’s sad. Not only for the students, but their families, who sacrificed to make something like this possible for them, as well,” she said. “All of those emotions in one bundle is hard to handle sometimes.”

Mia Compton-Engle, a sophomore who was supposed to go on the Greece trip, said she understands the district’s decision but is upset.

“I am grateful that the district is prioritizing our safety and well-being,” she said. “However, I am also incredibly disappointed, as I have been looking forward to this trip for the duration of the school year.” She said that she hopes to be able to visit Greece another time.

Paul Huang, a junior who was supposed to travel to Fiji, said he feels like he’s been robbed of an experience.

“While I appreciate the precaution, I think the cancellations will be in vain. Eating in the cafeteria is more dangerous at this point than any of the events that the school has canceled,” he said.

Senior Chloe Friedland said that she was really looking forward to her trip to Fiji. “I worked to pay for half of it, so that’s obviously upsetting. But I’m honestly more sad about not being able to go,” she said.

Daniel Farkas, a senior baseball player who was supposed to be headed to Puerto Rico, said it would have been the coolest thing he had ever done.

“It takes a huge toll. Obviously, it was a huge excitement, so it sucks to know for your senior year you won’t get to go on this amazing trip you’ve been looking forward to for a whole year. It was truly an opportunity to experience a whole different part of the world because for me, I’ve never left the continental U.S., and just to see a whole different perspective — and enjoy one last trip with the guys I’ve been playing with for seven years now,” he said.

He said he doesn’t think the decision is justified.

“It felt like a deep hole in my heart. You build up all of this excitement, and then for it to be canceled, just like that,” said Farkas. “I don’t think it should have been canceled because they don’t even have any cases of coronavirus in Puerto Rico, so if your worried about our safety, as they said in the email, really we have a greater chance of getting sick here than Puerto Rico, so I just think it’s kinda messed up.”

It is unclear whether students and their families will receive refunds.

The Greece trip, which costs approximately $2,900, according to Murphy, was booked through Grand Tours, an agency that has coordinated SHHS band, orchestra and choir trips in the past. The company is not required to refund money under these circumstances.

Students who were to travel to Costa Rica, may receive a partial refund as well as a travel voucher that can be used through the school in the future, according to Fogerty. The trip cost roughly $2,700.

Fiji trip participants paid $3,585 and are not expected to get any money back, according to Huang. Huang also paid for the $250 travel insurance, but it doesn’t apply if the school cancels the trip.

The Puerto Rico baseball trip cost roughly $1,440 per player, but the team did fundraising that brought down the cost to $550 a player, according to Farkas. So far, all costs have been covered by fundraising. The baseball program has spent around $20,000 on the trip and will not recoup it.

Damm said, “This is actually a very interesting time because we’ve never had to really face something, at least that I know of, at this level. And at this nationwide level. And this worldwide level.