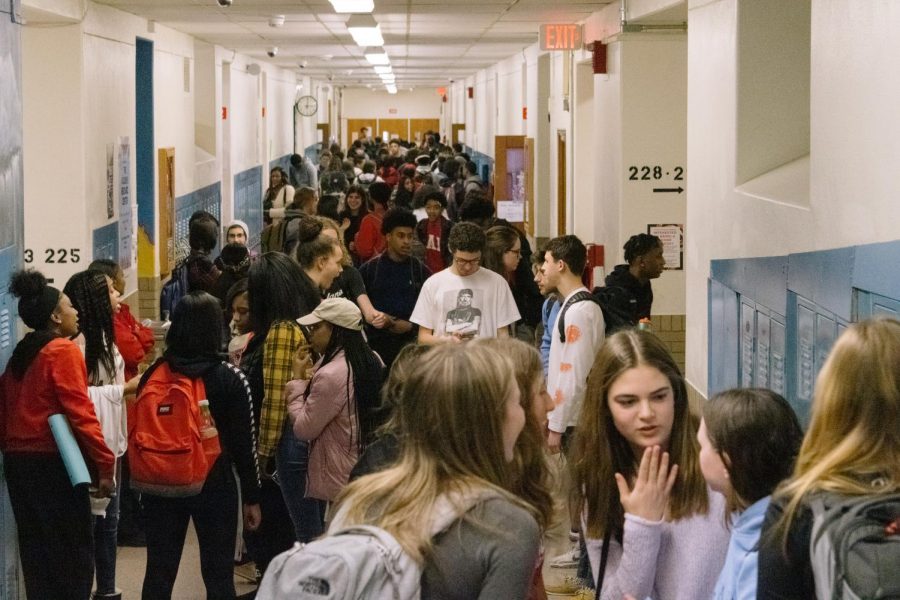 In the second floor main hallway after 10th period, students react to Gov. DeWine's decision to close Ohio schools for three weeks due to COVID-19.

This story was updated at 5:55 p.m. to reflect the district’s decision to close school Monday, March 16.

Gov. Mike DeWine announced at a 2 p.m. press briefing today that Monday, “children of the state will have an extended spring break for the duration of three weeks.”

He said the state would review the need for closures after that.

He later clarified in a tweet that all K-12 schools — public, private and charter — will remain closed until April 3.

In an email sent to staff  at 5:41 p.m., Dr. David Glasner, superintendent, announced that the district will close all schools for students at the end of tomorrow’s school day. All staff should report to their building on Monday, March 16 for a professional day.

“We will follow the governor’s directive. We are working out the details and will be speaking with the staff later today,” Executive Director of Communications and Public Relations Scott Stephens said.

DeWine began the press conference by talking about a fifth confirmed COVID-19 case in Ohio; a 55-year-old man in Trumbull County who has no recent travel history. DeWine said that the number of confirmed cases is likely to double every six days. He said that the pattern will continue for an unspecified amount of time.

DeWine also stated he plans to end visitations at nursing homes and state psychiatric hospitals for the interim.

He then signed an order with Ohio Department of Health Director Amy Acton banning gatherings of more than 100 people in places such as auditoriums, parades and festivals. The order excludes libraries, shopping centers, airports, schools, workplaces, places of religious worship, funerals and election stations. It allows sporting events to continue as long as spectators are excluded.

COVID-19 is a disease caused by a new strain of coronavirus first identified in Wuhan, China, on Dec. 29, 2019. Coronaviruses are a large and diverse group of viruses that can cause symptoms ranging from excess nasal mucus production to fever, shortness of breath, and severe coughing. Although investigation into the spread of COVID-19 is ongoing, the Centers for Disease Control and Prevention state that the virus spreads mainly from person to person,  between people who are approximately within six feet of each other. The virus is transmitted through respiratory droplets produced when infected individuals cough or sneeze, and contains viral material that can infect healthy individuals when inhaled or when otherwise ingested.

“Everyone has to think about other people. That’s why this is so very important,” DeWine said.

After school, Assistant Principal Sara Chengelis announced via P.A. that all sports practices at the high school were canceled for today. After school conferences continued.

In the 4 p.m. conference call, Glasner also said the district is creating plans for special education students and distribution of free and reduced lunches.

“It’s a lot of mixed emotions right now because, truth be told, people are dying out there,” senior Jordan Green said. “I mean, of course it’s exciting to get school off; I just have a little bit of concern about the type of work I’m going to have while I’m at home.”

“It feels like it is just a cascading thing. The closures just keep piling up,” English teacher Christopher Cotton said. “This is way beyond anything that I remember.”

The World Health Organization identified COVID-19 as a pandemic March 11. There are 125,000 cases reported globally in 118 countries and territories according to the WHO. There are 1,215 confirmed cases and 36 deaths from COVID-19 in the United States as of March 12, according to the CDC. The WHO has identified that the elderly and individuals with pre-existing medical conditions such as high blood pressure, heart disease, immunodeficiency disorders, lung disease, cancer or diabetes are more likely to develop severe illness, be hospitalized or die.

Woodbury special education teacher Nicole Litterst said she is overwhelmed. “I think it’s going to impact [students] greatly because I provide such an individualized instruction to each one of them,” she said.

Freshman Ella Rendall said, “I am not insanely worried about it spreading, considering I’m pretty healthy and a teenager. I’m a little upset because it disrupts a lot of our school plans, though I understand why they’re doing it.”

“This is new territory for everybody,” said Cotton. “They haven’t done this before, and like everyone else, they’re dealing with it as it comes up.”

“Online education has its place. There’s times where it’s the best thing available,” Cotton said. “It’s a terrible loss, but if we have to do that, then we’ll do the best we can.”