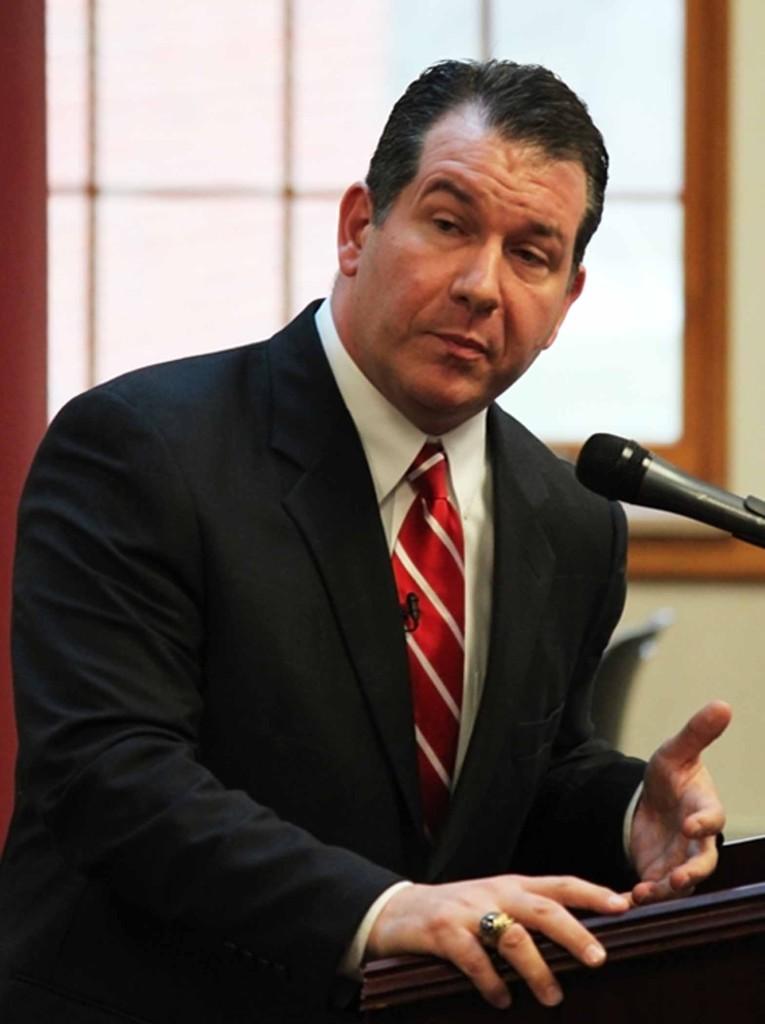 Dr. David A. Bowlin, one of three final candidates selected by the Board of Education to be the next superintendent of Shaker schools, delivered remarks and responded to community questions in a public session at the high school March 13.

Bowlin, 49, is currently director of curriculum and professional development at The Center for Learning, a non-profit publisher that specializes in online lesson plans for high school and middle school, in Westlake. He has been there since Sept. 2011. His previous experience includes directing online learning for Visual Learning Network Partners in Pittsburgh; serving as “Second in Charge” to the superintendent of the Elizabeth Forward School District in Elizabeth, PA; working as assistant principal and then principal in that district’s high school; acting as dean of students and gifted coordinator at West Jefferson Hills School district in Jefferson, PA, and teaching high school biology.

During his five-minute introductory comments, Bowlin said that his background in working in schools combined with his “intense business acumen” would help him in running the district. He told the crowd of approximately 100 parents, teachers and residents that he knows how to make difficult, but necessary spending cuts in tough budgeting situations. Bowlin said that having safe schools would be a top priority for him, calling it a “critical piece to the educational puzzle.” He also emphasized the importance of innovative teaching, collaboration inside the district, the idea of community and the “visibility of the superintendent.”

The majority of the hour-long afternoon meeting was spent on questions from the audience, written down and posed by a moderator. Bowlin said that some of the first things he would do as superintendent would be examining the district’s finances, which he hinted could not be sustained through levies increasing the already “very high taxes” every few years, and spending a lot of time “talking, listening and learning” from all those involved in the school system.

When asked about teacher evaluation, Bowlin said it should not be solely based on student test scores. “When evaluating a teacher, the overall pedagogy of what happens in classrooms is critical,” he said. Bowlin said that he saw “a lot of technology” in the schools that he toured earlier in the day. He said that his previous relationships with unions and teachers’ associations were “very good ones” due to his ability to build trust. Bowlin said that he likes the interconnectedness of the International Baccalaureate program, but that Advanced Placement classes have “a ton of merit.” He described his experience with diversity as “always a positive, never a negative.” When prompted about the socio-economic diversity in Shaker, he said, “Closing the achievement gap is obtainable.”

Bowlin spent the day with the board members, touring schools and meeting with administrators, teachers, parents, students and the Stakeholder Advisory Committee. The board interviewed him again after the public session.

The other two candidates, Gregory C. Hutchings and Demond A. Means, will have their public sessions on March 14 and 15, respectively in the high school Upper Cafeteria from 4:30- 5:30 p.m. All three sessions are being recorded and will be posted on YouTube by the board and available the evening of March 15. Community members can send their thoughts on the candidates to [email protected]