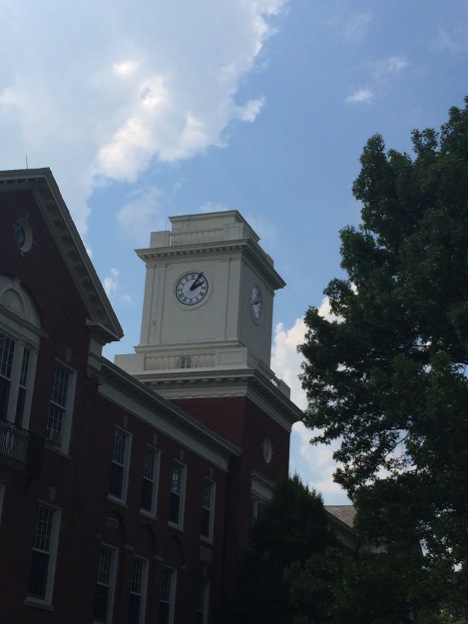 The Woodbury Clock Tower in its present state without the cupola. After a summer storm, the structure began to lean and the top portion was removed.

Repairs to the Woodbury Elementary School clock tower will take months rather than days to complete.

Construction on the tower started in July after it was noticed that the tower began leaning, presenting a potential safety issue.

The lean of the clock tower’s cupola, the house-like structure at the top, caused concern in the Shaker community. Keith Wagner, the director of operations for Shaker, was the first to notice the problematic tilt of the structure.

The Board of Education decided July 1 to remove the cupola and the bell from the tower. They were to be taken out, restored, then put back within six days. All of these repairs were to be done with a budget of $54,400.

However, Executive Director of Communications Scott Stephens stated there is currently a project architect assessing the situation and it will take “several months” for the assessment to be complete and a decision to be made on the direction the project will take. Stephens adds that “once the process is complete, the schedule for repair will be announced.”

The issue was discussed in the four-hour meeting July 1. Susan Buddenbaum, co-president of the Woodbury PTO, recognizes the clock tower as a symbol for the school. She states that the district must be thoughtful with how they proceed because it will likely turn out to be “a big expense.”