The district's handling of the situation provoked a range of responses from Shaker students and parents. 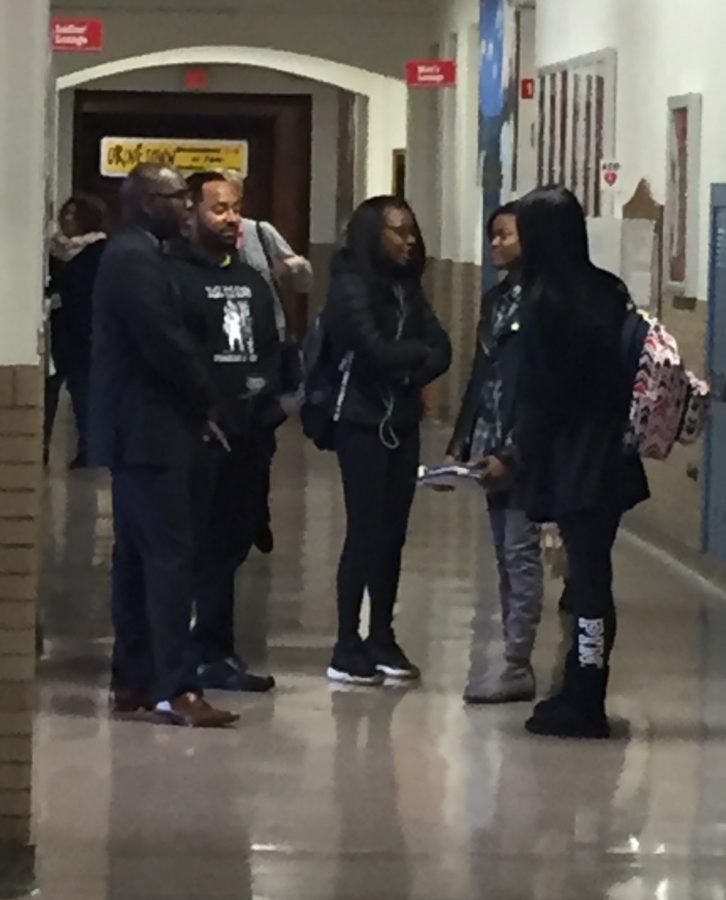 Students, teachers and parents are expressing dismay and frustration days after the election of Donald Trump and the revelation of a student’s racist beliefs.

The administration’s handling of the incident, in which two students relayed a third student’s racially derogatory text messages to an unintended audience via social media, elicited disapproval from students and led to the blackout and walkout planned for Friday, Nov. 11.

“I was shocked and disturbed by the texts but even more by the school’s reaction,” said Molly Amolsch, a caucasian junior. “The student body, myself included, wanted justice, but the school seemed to want to shut down the outspoken students. It was wrong that they were disciplined and [the student who made the comments] wasn’t. Elena and Myyah have the support of their peers, even if the school doesn’t want to support their own teachings.”

“Elena and Myyah” are junior Elena Weingart and sophomore Myyah Husamadeen, the two students who posted the derogatory texts and received disciplinary action.

“I’m really conflicted with regards to the Twitter incident,” said junior Jude Hinze-Gains, who is African American. “I respect that the protocol for the school was to suspend someone for ‘exposing’ a person’s private texts, but the wrong person was suspended. It should have been Elena suspended and Myyah in [in-school suspension], considering that Elena was the one who posted messages in the first place.” Hinze-Gains is a leader in the Student Group on Race Relations.

However, Weingart told The Shakerite that both she and Husamadeen received in-school suspensions, each for one day.

“I don’t think it was necessary for the two girls to have been disciplined the way they were, because they didn’t do what they did – post private messages on a public forum – to be mean or to cause any harm,” said African-American senior Mikayla Christopher, who is also a SGORR leader. “I believe they were simply trying to bring the voice of the ‘less tolerant’ to the light.”

According to a Fox 8 News interview with Weingart broadcast Nov. 11, Weingart and Husamadeen were suspended for putting “a private message on a public forum.”

“Initially, I thought it was unfair, but I saw the story on Fox, and it said that the [student who made the comments] technically didn’t break any rules,” Shaker parent Michael Christopher said. “When I thought about it, I understand that the two who posted it actually broke school rules.”

“If that is the school policy and the penalty is actually defined, then I guess that’s what has to happen,” Michael Christopher said.

The Shaker Schools Student & Parent Handbook defines harassment as behavior that seeks to “intimidate, insult, annoy persistently or otherwise abuse, physically, orally, in writing, or through an electronic device including but not limited to a computer or cellular telephone.”

However, because the student’s texts were sent privately to Weingart, and not in an attempt to harass her, the student cannot be disciplined. Weingart and Husamadeen’s suspensions were likely for violating the “Disruption of School” section of the handbook, which refers to a disruption as behavior that derails the usual progress of school. Administrators may have determined that the tweets and snapchats they posted disrupted learning and assigned suspensions as a result.

“I also understood that posting a private conversation without protecting the student’s comments was not the best decision,” said junior and African-American Felecia Hamilton. “However, I didn’t think suspension was the right punishment.”

“As wrong as it is, I wish that opinions which draw on hate were not considered opinions in the eyes of the law,” said Hinze-Gains. “Hate and opinion are different things; opinion is perfectly acceptable, and hate is absolutely intolerable.”

The prejudiced comments themselves drew a range of emotions from Shaker students and parents.

“I thought our school [was] very diverse and I was disturbed by the remarks made,” said junior Courtney Smith, who is African-American.

Sophomore Nasir Rashid, who is African American, said that he was surprised by “how fast things escalated but not surprised of what was said. Racism is still very present today.”

The Nov. 8 election of Republican presidential nominee Donald Trump, who waged a campaign of disrespectful language about immigrants, Muslims, African Americans and women, arose during discussion of the unprecedented revelation of racially derogatory texts at the high school two days later.

“I immediately reacted to comments [the student] made about black people so soon after the election,” said Hamilton. “I felt that with Donald Trump as our president, and him being such a symbol for racism and sexism, xenophobia, and homophobia, that it would open the door for people who share his views to act on them.”

Other students agreed that the content of the texts was exacerbated by the presidential election.

“I believe that the election took a big part in the chaos,” said junior Mysun Kidd, who is African-American. “A lot of people, including myself, are very upset with results of the election . . . Some rude remarks might be a regular thing nowadays.”

“The school felt kinda gloomy and sad,” Kidd continued. “The whole government will be majority red for the next four years. This causes even more separation between the political views of the students. But on Friday we unified together as a whole school because of the newfound racism in this school.”

“I believe that the whole presidential election exposed a lot of what America believed was already healed,” said Eric Dina, an African-American parent with of four children who attend Shaker schools.

The district issued a statement from Superintendent Gregory C. Hutchings, Jr., in which he wrote that “we are coming to the close of a week that was trying for many. Emotions are raw and running high. It’s clear that a community like Shaker Heights is not immune. As a community and as a school district, we have an opportunity to model civility and mutual respect even as we disagree.”

The results of the presidential election and Friday’s event prompted a desire for community discussion. An announcement was made Nov. 11 at 2:55 p.m. inviting students and faculty to an open forum discussion after school with Hutchings.

Shaker parent Cheryl Cameron said, “What would be wonderful is if we could actually have some sort of community meetings, where all the members of our really wonderful diverse community can get together.”

Students and parents alike also had advice for district handling of future incidents similar to this one.

“I wish that the student was made into an example so that other students don’t follow in their footsteps,” said Amolsch. “Next time they need to be more aware of their student body and how these messages affect them. The next student that does this needs to have consequences from the school, not just their peers.”

“To move forward, there has to be an element of trust that things have taken place and that the punishment was doubtless in whatever way, shape or form,” said Dina. “It’s a tough situation. I don’t know if there’s one clear answer.”

“I talked about this with my mom, and we agreed that the administration should have implemented restorative justice where all of the students involved would learn from what happened instead of just being punished,” said Hamilton. “What good is the suspension if the tweet has not been taken down yet?”

Hamilton explained restorative justice as an approach that would foster discussion rather than assign punishment. “The questions asked to each student would be: What happened? What were you thinking? How were you feeling? Who else has been affected by this? What do you need now so that the harm can be repaired?” she said.

In his statement, Hutchings also wrote that “as a district, we will continue to uphold our Shaker aspirations – excellence, equity and exploration – for all students. These recent events have given the school district a special urgency to have a deeper conversation around race and to further develop our plan of action. As those plans come together for a broader discussion, we will keep the community informed.”