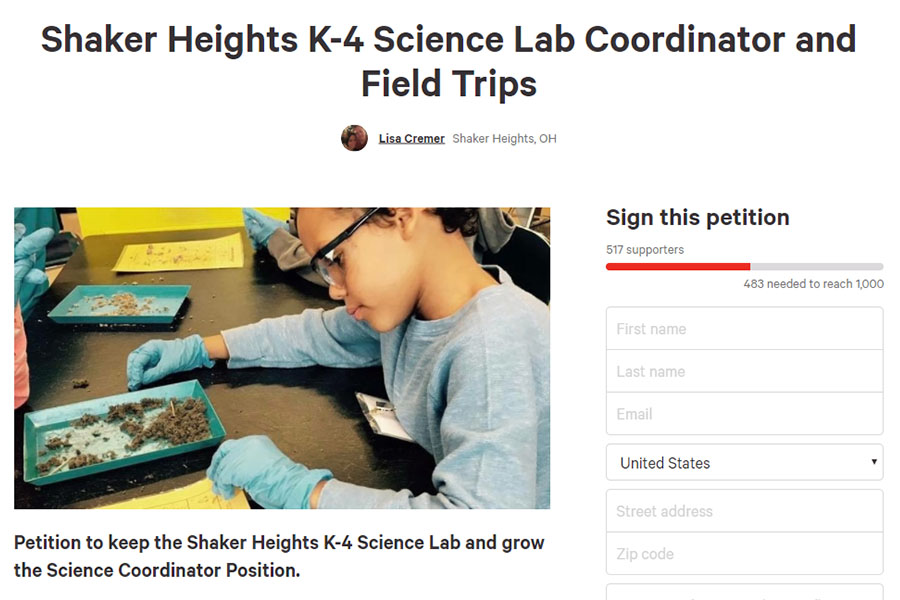 Last updated at 1 p.m. May 10, 2017 to clarify names of those who created the online petition.

While the administration continues to argue that Pre K-4 science changes were made to benefit students, parents continue their public opposition via an online petition.

A statement in an online Board Packet for the week of April 10-13 announced two changes to the current Pre K-4 science program: The K-4 science coordinator position will be replaced with a district-wide technology specialist position, and elementary students will no longer visit Woodbury for science lab field trips. Instead, in-class science lab kits and additional field trips will aim to enhance student learning through hands-on curriculum.

Emotions ran high at a community discussion April 29 when parents and staff gathered to ask Assistant Superintendent of Curriculum and Instruction Terri Breeden and Director of Curriculum Amy Davis questions and express concerns about the district’s decision.

Davis said the heated atmosphere and one-hour interval made it hard to deliver information, which, she joked at the meeting, was often “clear as mud.”

Davis visited The Shakerite May 2 to elaborate on the changes and, she said, address misconceptions that arose at the meeting.

At the meeting, community members expressed concerns about eliminating Woodbury’s immersive science lab visits and replacing those experiences with in-class labs. Some worry that the district is moving away from hands-on approaches.

“Part of the Shaker experience and our pursuit of equity is that we provide amazing experiences,” Davis said during the interview. She said she is confident the change won’t diminish hands-on experiences, but instead provide new and, she hopes, more frequent immersive activities.

Concern has also arisen about whether the science kits will adequately replace the lab visits. For example, will students still be able to dissect cow eyeballs if their classroom lacks a sink?

“There are certain experiments that require certain things that you can’t do inside of your classrooms,” acknowledged Davis, who planned to meet with the Shaker Nature Center to discuss their two classrooms — indoor and outdoor — for potential lab use.

Some classes already visit the Nature Center up to four times annually focusing on, for example, the changing seasons. Davis said this is a “feasible” option for all grade levels.

Some classes also visit Holden Arboretum, another location offering a variety of hands-on science activities. In some instances, Arboretum staff visit students in their classrooms to follow up with their experiences. “We would never replace” programs like these, Davis said.

“The goal was to really engage students in science,” Davis said of the decisions.

The K-4 science coordinator position’s replacement with a district-wide technology specialist position also provoked some questions at the discussion.

Davis said that, unlike some rumors have implied, no one has been hired to fill the new position, although some candidates have been interviewed. “Certain steps have been taken, but everyone is trying to be reflective and thoughtful moving forward and in consideration of the community and the staff,” Davis said.

The same is true for the people the district plans to enlist to help find the best science kits, she said.

Davis explained that while these consultants would potentially be helpful, the district plans to look for candidates among existing staff and will also appreciate help from community members with science backgrounds, which Davis acknowledged are plentiful in Shaker Heights.

“We have lots of different resources in science; that was an example of one, and I absolutely felt that got lost in the meeting,” Davis said.

Some community members faulted the International Baccalaureate Program for demanding too much of the curriculum, thus steamrolling Shaker traditions and values such as the hands-on labs experiences offered at Woodbury.

Davis said that the district values Advanced Placement and art programs as much as the IB program.

“If there is a misconception that IB is driving any of this, I guess I would want to put that to rest,” she said.

Davis said that other aspects of the science changes are in “an information-gathering stage,”

and that no financial commitments have yet been made for any of the changes.

“When we heard how upset teachers were about this change, we had to be a voice for them,” Cremer said.

The two met May 3 with Breeden and Superintendent Dr. Gregory C. Hutchings, Jr., to ask questions and discuss the changes but left the meeting feeling dissatisfied.

“We decided to create an online petition because we felt like our concerns in the meeting we had with Dr. Hutchings and Dr. Breeden were not taken seriously,” said Wozniak, “and we wanted to show that there are more people who are in support of our efforts than they believe.”

The online petition received more than 400 signatures within 24 hours of posting.  By May 9, it had 517 supporters.

The ideal result would ensure a K-4 science coordinator at every elementary school, preserve the Woodbury lab visits and create an outdoor science classroom experience at the Shaker Nature Center, according to Cremer.

On May 8, Hutchings posted a letter addressed to the community on shaker.org, titled “An Important Message About Pre K-4 Science Instruction.”

The letter echoed previous statements, including the administration’s intention to “increase and enhance science experiences for our Pre K-4 students through regular classroom science experiments and instruction, as well as real-world experiences.”

The letter continued, “Our Curriculum & Instruction Leadership Council (CILC), which consists of teachers and administrators, will continue to work toward our curriculum development efforts, including our goal to provide a more robust science experience for all students in Shaker.”