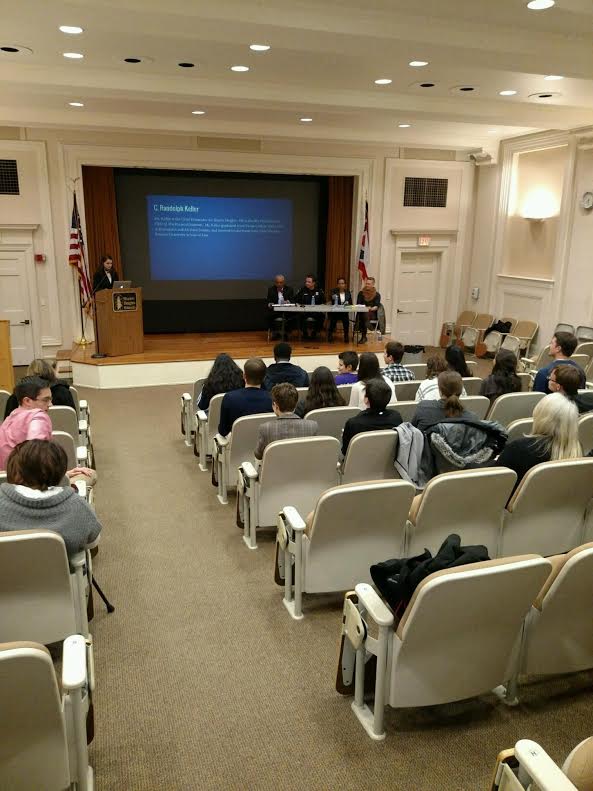 Community members, teachers and students gather in the small auditorium for the Community Forum on Police Brutality and Racial Profiling.

That was the message delivered April 5 when 61 Shaker residents attended the Shaker Heights Community Forum on Police Brutality and Racial Profiling.

Planned and hosted by senior Abby Connell, the forum comprised a brief slideshow displaying statistics on minority representation in police departments and gave background on racial profiling, followed by a panel discussion on the topics. Avery Martens from the ACLU of Ohio, Ayesha Hardaway, professor of Health Law and Civil Litigation, Jeffrey Demuth, commander in the Shaker Heights Police Department, and Randolf Keller, chief prosecutor for Shaker Heights, were on the panel.

Connell asked the panel a series of questions, the first two about the relationship between police and their community. Demuth emphasized communication as a key in retaining a quality relationship between the community and its police force. “We police by consent,” he said, “and it’s important to know that, because we police by consent, we have to have a highly collaborative association with our community.”

Keller agreed. “If there isn’t communication that is blowing in both directions, there’s a distinct possibility that one view of the community gets skewed, and then we begin to spiral into this misunderstanding,” he said.

Connell explained that the perspective of Shaker’s police force is extremely valuable in order to get the whole picture. “It’s a relationship between the citizens and the police, so if you want the police to work with you, you also have to work with the police, and understand where they’re coming from and look at it from their point of view,” she said.

“It’s easy, as an 18-year-old, to feel like this is a new issue because, in the last three years, all of a sudden it’s showing up in my Twitter feed,” Connell said.

Hardaway credited recording devices and social media for bringing the issue of police brutality and racial profiling to prominence. “Law enforcement agencies, in general, are behind the curve,” said Demuth. He explained that public relations are difficult for a police force that isn’t completely caught up on social media. 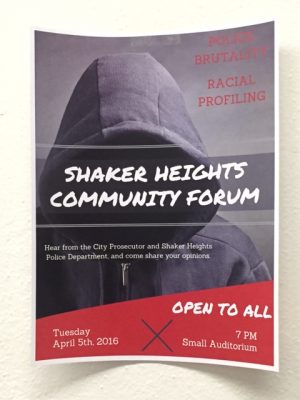 A flyer hangs in the hallway of the high school encouraging students to attend the forum.

Keller said it is important to note that police brutality stems from acceptance of police neglecting proper protocol and their teachings. “Brutality in it’s global sense is something that permeates our community on very different levels,” he said. “What we should focus on is police misconduct.”

Demuth reflected on an experience of a drug bust gone wrong. His SWAT team received faulty intelligence about the location for the drug bust and broke into the wrong condominium. As he walked into the bedroom where the guns and drugs supposedly were, he saw an unidentifiable figure turn toward him with a gun raised. “I had two choices,” he said. “I could shoot him or try to take the gun away.” He tackled the individual, only afterward realizing that he had tackled a 9-year-old African American boy who had an exact toy replica of an actual gun.

“I went outside that condo, and I cried like a baby,” he said.

Demuth reminded the audience that, although legally he had done nothing wrong, the story would have been reported quite differently. “What you would have heard on the media is, ‘White Shaker Heights SWAT Officer Shoots Unarmed African-American Youth,’” he said. His takeaway? “Always seek the truth.”

One of the most prominent topics of discussion was police arbitration of officers who “don’t fit the job” and aren’t able to perform well as police. Arbitration is the settlement of a dispute, in this case, the capability of an officer, by an impartial individual.

“The arbitration process is a double-edged sword,” said Demuth. Commanders often have difficulty recommending an officer to be cut from the force, in part because legislators fear some commanders would abuse such a power. An officer who shouldn’t be an officer therefore remains on the force, a serious issue for forces trying to prevent police misconduct.

Training officers on how to control their implicit biases is a key step that is being used to try to prevent racial profiling. Demuth said that, while the SHPD does not specifically train officers on implicit bias and racial profiling, he does teach an ethics class for officers. The department also keeps a bias-based report on officers and does random audits of body and dashboard cameras.

One of the most prominent topics of discussion was police arbitration of officers who “don’t fit the job” and aren’t able to perform well as police. “The arbitration process is a double-edged sword,” said Demuth.

In order to take action against social injustice, Hardaway would like to see a student group instituted that governs disciplinary actions taken by the school, which she said would be a good model to show how a community wants to govern themselves. She also pushed for a more inclusive history curriculum that would include police-citizen relations of the past, especially one that accurately portrays the role of the police in slavery and during the civil rights movement.

Connell reflected on the forum afterward, namely the discussion of history. “There was a lot of emphasis on the importance of learning the history that minorities have had with the police department because it goes to show that this isn’t a recent issue,” she said. “The system has been broken for a long time.”

Connell also asked each of the participants where they stood with “Black Lives Matter” versus “All Lives Matter.”

“All lives will matter when black lives matter,” said Martens, quoting the title of a poem. The other panelists agreed.

Keller reflected briefly on a recent Facebook post made by an African- American policeman. The post was commemorating four African-American police officers who had been killed in the two weeks previous. The post read, “I guess black lives matter unless they’re wearing blue.”

Following the panel discussion, audience members were invited to talk one-on-one with the panelists.

Martens thought that the meeting was a “great way to start a difficult conversation,” they said. “The panelists complemented each other well.”

Connell said she first thought of holding a forum when she participated in a women’s leadership camp in Washington, D.C. “They were kind of just encouraging us to think of community issues,” she said. “This was right around the Brelo case decision and so that was kind of something that was really big in Cleveland news, so even though police brutality might not be an issue in Shaker, that’s kind of where I got the idea.”

“It was fantastic,” said Keller.

“Communication will solve the lion’s share of these problems.” Demuth agreed. “We need more of this,” he said. “The more we have these types of endeavors it allows us to understand each other more.”

Shaker parent Tamara Turner thought the forum was interesting and well organized. She especially appreciated the diverse panel of experts. “I liked that they represented many different angles,” she said. Two panelists were black, the other two were white, along with genders split down the middle, two females and two males.

“It was exactly what I expected,” said Hardaway. She admired the structure of the forum and applauded Connell for identifying a contemporary issue and bringing in experts to talk about it.