Cell Phone Use While Driving Banned in Shaker 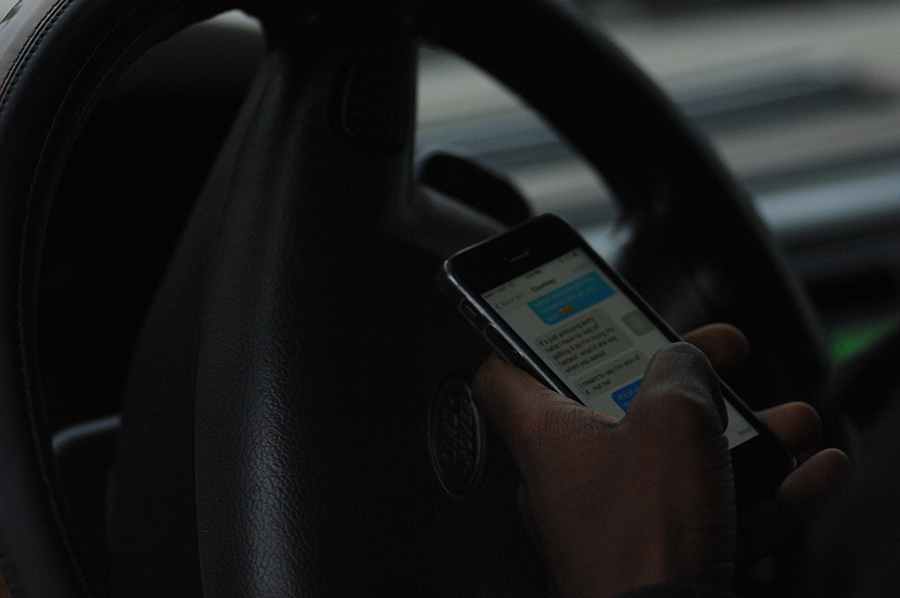 A student texts a friend while parked near the high school on Nov. 11.

On Feb. 24, the Shaker Heights City Council enacted Ordinance No. 13-90, banning the use of all hand-held electronic communications devices while driving. The law goes into effect March 26.

“We as human beings are bombarded every day with different things that support us,” Shaker Heights Police Chief Scott Lee said. “We simply can’t multitask as much as we think we can. We [the city government] want to enhance the overall safety of the community and the motorists.”

When the new law takes effect, if a driver of any age is caught talking or texting on his cellphone while operating a vehicle, he will be charged with a first-degree misdemeanor. In Shaker Heights, almost all traffic laws dealing with moving violations are considered first-degree and therefore carry the same penalty. According to the city government’s website, “this includes speeding, failing to obey traffic control devices like stop lights and signs, [and] illegal u-turns. . . . The Municipal Court judge determines the penalty to apply for each case within the law.”

The maximum penalty for first-degree misdemeanors is a $1000 fine and up to six months in jail. According to Lee, however, “all traffic violations are regular citations.” As such, most people caught calling or texting while driving should expect fines similar to those of speeding tickets, instead of $1000-fines.

The banning of “the use of hand-held electronic wireless communications devices,” as Ordinance No. 13-90 states, applies to cellphones, all other text-messaging devices, personal digital assistants, all types of computers and computer tablets, and other wireless devices that can communicate via text.

However, those communications devices are allowed in cases of emergency and situations when the driver is parked clearly out of the way of moving vehicles. The ban also does not apply to government employees inside public safety or service vehicles and commercial truck drivers using a mobile data terminal as a mode of communication. Additionally, if the electronic device is voice operated and lets the driver have both hands on the wheel while operating the device, it is permitted. The ban therefore allows the use of Bluetooth. The ban also lets drivers access their devices’ on/off functions if doing so only requires one hand.

In 2013, when Ohio outlawed texting while driving, “there was some discussion at the state level about whether cellphones were going to be banned statewide,” according to Lee. In Shaker, “we didn’t think it [the texting ban] went far enough to provide the extra level of safety for our community.” According to the city government’s website, Shaker decided to ban cellphone use while driving mainly to keep drivers’ eyes and concentration on the road.

Edie Shafron, a Shaker parent, supports that goal. She considers any cellphone use while driving “very dangerous for teenage drivers to do because they are new to driving.” She thinks similarly in regards to adults driving.

Mayor Earl Leiken said, “Studies have shown that it [talking and texting while driving] is a distraction and that it causes accidents. People shouldn’t be doing it while they are driving.” The new ban looks to reduce the number of both teen- and adult-related car accidents that result from cellphone use.

The ban also aims to establish uniformity in the Cleveland area. “It’s a problem when you’re driving through borders where you can talk on your cellphone in one [city] but not the other,” said Councilwoman Nancy Moore, who voted for the ban. With that in mind, Shaker’s new law is virtually the same as Beachwood’s cellphone ban.

Sophomore Talisha Douglas supports the new legislation. “I think it’s the right thing to do,” she said. “It might involve a lot of people getting tickets, but I think we all know how dangerous it is.”

Andrea Banks, another sophomore, agreed. “Texting on your phone while driving can wait,” she said.

Shaker’s ordinance was passed by City Council on Feb. 24 with a 5-1 vote. The legislation for the ban was first introduced to the Safety and Public Works Committee on Sept.18, 2013. It was introduced to the full City Council on Oct. 28, the first of three readings for the ordinance. The second reading, which was delayed, took place Jan. 27, 2014, followed by the final reading on Feb. 24.

Passing the legislation was such a “long process for the city” because, Moore said, “the feeling was that if we passed it, that the public wouldn’t realize what was happening. We wanted to catch more attention.” All three meetings were open to the public, where all present had an opportunity to comment on the ban.

Councilman Jim Brady, the lone dissenter at the final meeting, considers the new ban too extreme. Brady said, “I thought that it was a good idea to move forward on the texting ban, but I think it is too far to ban talking on your cellphone. I don’t see it to be as dangerous as texting.”

According to Moore, the City Council plans to keep track of the ban’s success. “I have asked the police to supply a quarterly report for cellphone citations to the City Council,” Moore said, “so we can see the effects of the new ban.”

Laws go into effect 30 days after their passage in Shaker. As such, this ban will become effective March 26. A 60-day warning period will follow, after which newly posted signs at the city’s entrances will remind drivers of the new law.

“It should make the streets safer for all of us,” Leiken said.