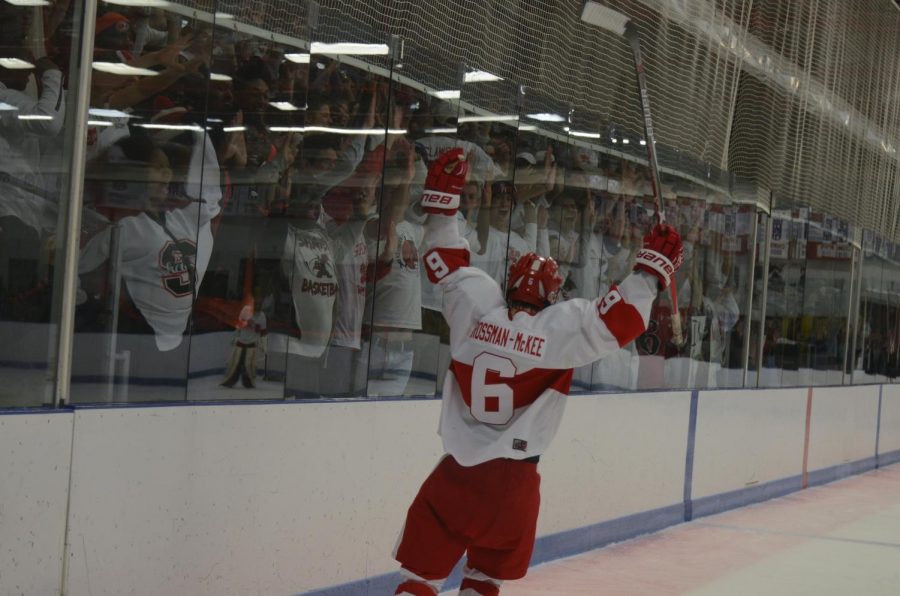 Students spectators cheer after a goal in the 2017 varsity hockey home opener game.

“Historically at opening hockey games, probably the last five years, we’ve had at least one incident every opening game of underage drinking,” Athletic Director Don Readance said. “So is that part of it? Yeah, it’s part of it, but it’s just in general–we have to make sure that people are safe when they come to the games, and that’s for their own wellbeing and for others as well.”

According to an administrative statement distributed to students who bought game tickets, “students receiving a positive results [noting the presence of alcohol] will be taken to a secondary location where the Shaker Heights Police Department and the parent/guardian will be contacted.”

Students who test positive for alcohol use will be turned over to law enforcement and given school consequences. According to the 2018-19 student handbook, possessing or using alcohol at school sponsored events can lead to disciplinary action including in-school suspension, suspension or expulsion.

Students with questions about the policy were directed to speak with their assistant principal.

“On the one hand it makes sense because they are trying to be responsible for the kids and their wellbeing. On the other hand, I think it can encourage other activities,” senior Audrey Himes said.

Multiple students tested positive and their parents were called to meet with the police and their assistant principal about consequences.

At the 2011 hockey home opener, seven students were arrested after tests revealed they were intoxicated.

Breath tests began being administered to participants of 2017’s Shaker prom and the 2018’s homecoming dance, and have continued to be administered at dances since.

Sophomore Hanna Moore said, “Personally, I think it’s a good idea, because I know people were drinking a lot before games, and that was causing them to get out of control. So I think it is a good thing.”