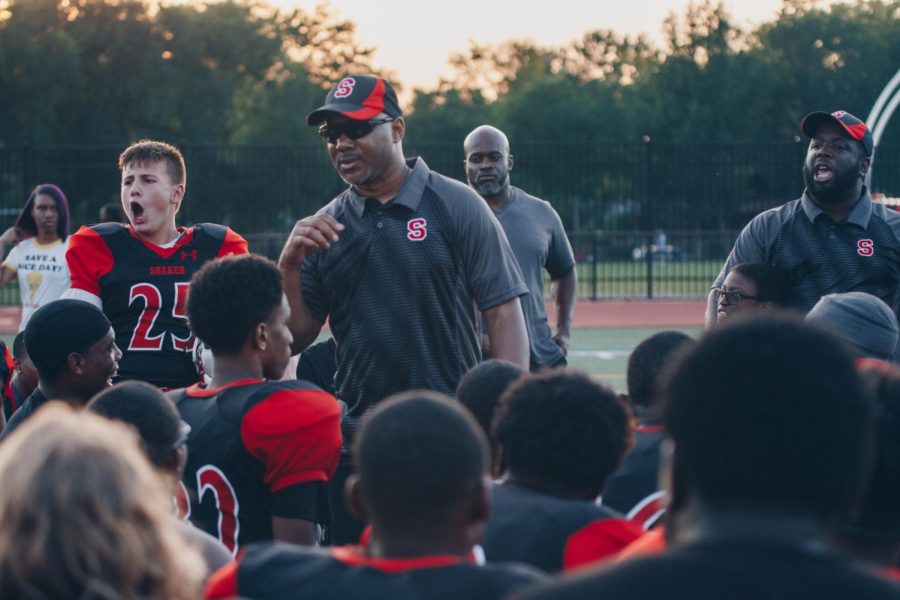 Four high school employees, from athletics coaches to a veteran English teacher, have been placed on administrative leave, have resigned or been fired since Oct. 10. The Shakerite continues to follow the stories. Here is what we know so far about this unprecedented development.

Jarvis Gibson, varsity football head coach for the past eight years, resigned Oct. 26 after the district placed him on administrative leave.

Gibson was placed on leave after the district learned that a man it once employed as an assistant coach under Gibson was currently acting as a volunteer coach despite having developed a criminal record.

According to Board of Education meeting minutes, Johnathan Harrell, was hired as an assistant coach in September 2011. He is no longer under contract with the district but had been assisting the team throughout the season.

Harrell pleaded guilty to the charges of petty theft, domestic violence and abduction Oct. 22, 2015. The prosecutor dropped the remaining charges in exchange for the plea. Harrell was sentenced to 180 days in jail from the time he was indicted until the time he accepted the plea bargain, from September 2014 through June 2015.

Harrell was also sentenced to two years probation under the supervision of the domestic violence division and three years of post-release control.

He was sentenced to 134 days in Cuyahoga County Jail. This included the time he was indicted until the time he made his plea. Harrell received credit for his time spent in jail during that interval and was released after his plea.

“I mean, he was a cool dude and he didn’t ever make me think he did anything like that. He’s definitely a good guy, though. He probably just made some mistakes he regretted,” senior Josh Ailiff said.

Shaker administrators declined to say why Gibson was placed on leave or to comment on Harrell’s background because Gibson’s status is a personnel matter,  which the The Ohio School Boards Association defines as “the appointment, employment, dismissal, discipline, promotion, demotion or compensation of an employee or official, or the investigation of charges or complaints against an employee, official, licensee or student, unless the employee, official, licensee or student requests a public hearing.”

Coach Howard Little — “coach Juice” — acted as head coach for the Raiders’ final game of the season Oct. 27, a 40-0 loss to Euclid. Shaker finished with a 5-5 record. According to junior Ian Suber and senior Kenai Cooper, Little had previously announced that he would leave the team following the conclusion of the 2018 season.

“Juice was for sure going to leave until Gibs was fired. Now, since he’s in charge, I think he’s going to stay. If he even has the team next year, he’s most definitely going to stay,” Cooper said.

Players were awaiting a decision from their coaches about practice location prior to the announcement about Gibson.

“We were kind of happy and relieved, because it was the end of the season, and we really didn’t care, but at the same time it’s going to be depressing,” Cooper said.

Suber said Gibson provided discipline for the players and had low tolerance for misconduct on the team.

“Towards the end of the season he would have us go go-kart-racing or something and team bond. I’m going to miss that,” Cooper said.

Suber said that the team will have to adjust to the coaching setbacks next year. “It’ll probably be a little interesting because coach Juice will be gone. He was the entire coach of the entire defense and the defensive back coach,” he said. “We don’t know who they are going to bring in for him.”

An English teacher was placed on administrative leave, raising concern about the administration’s discretion

Morris said he would have handled the decision differently. “Personally, I wish this had been a series of conversations and meetings, as opposed to administrative leave,” Morris said. “There is an administrative discretion. My preference is obviously different than the administration’s preference.”

“I can’t find fault with it, necessarily, because they have a choice, but personally I would have wished for a more restorative approach,” he said.

Although, Podl was placed on leave Oct. 10, Principal Jonathan Kuehnle sent an email to the parents of Podl’s students Oct. 19, informing them of the decision. Teachers received the same email.

According to both Kuehnle’s email and Director of Communications Scott Stephens, the district cannot comment on the situation because it is a personnel matter.

Morris explained that the district forbids any communication between the employee on leave and students, staff and parents in order to ensure the integrity of the inquiry.

English teacher Victoria Schmidt has taken on Podl’s Advanced Placement Language and Composition class, and English teacher Marina Wasserman has assumed her two 11 English Advanced/IB classes for the duration of the leave.

“I’m really frustrated,” said junior Quinn Scanlon, a student of Podl’s. She said it is difficult to adjust to a new teaching style this far into the year.

Senior Oriana Anderson, a student of Podl’s for the past two years, said that Podl is a great English teacher. “She was my favorite teacher. She pushed me to be better — my writing only got better in her class,” she said.

Anderson said that her opinion of Podl is common among her students and that they were confused and upset when she was forced to take leave.

Scanlon said, “I thought she was a really good teacher. I liked her teaching style. I think she cared about every student’s journey to success and she wanted all of her students to succeed.”

Two cheerleading coaches have resigned, and the district continues to investigate claims that an assistant coach humiliated a cheerleader because of her weight.

Cheerleading coach Vikki Long resigned after 23 years of coaching. According to a statement issued by the district Oct. 11, she had told the district in prior months that she was planning to retire from coaching at the end of October. She continues to work as an administrative assistant in the athletics department.

According to the Oct. 11 statement, the team’s assistant coach also resigned after complaints of body shaming, directed at junior Laylonie Dowdell, were made public at a Board of Education meeting Oct. 9.

“We take complaints of this nature very seriously. In fact, an investigation into this matter was underway prior to complaints being aired publicly at the October 9 Board of Education meeting,” according to a district statement to the members of the cheerleading squad.

“The head cheerleading coach had informed the District months ago that she would be resigning from her coaching duties at the end of October. Her assistant coach resigned after the complaints were lodged last week. Regardless of these resignations, the investigation and follow-up into these complaints will continue,” the statement said.

Dowdell and her mother, Lakessa Taylor, spoke to News 5 Cleveland for a taped television interview. The story was then picked up by other outlets, including USA Today. Taylor also did an interview for TV with Cleveland 19 News.

“[The coach] stood up in front of the team and said, ‘Laylonie, you’re always eating something. What are you putting in your mouth now?’ I was just so sad,” Dowdell told Cleveland 19 News. “I did gain a few pounds, but you know it’s hard coming from your coach. You’re supposed to be there to help and mentor me.”

Dowdell, who refused an interview request from The Shakerite for this story, told 19 News that the coaches refused to give her a new uniform because her old one was too small. She said the coaches also made her run laps while waiting for a ride and laughed at her.

Dowdell’s mom did not feel the school was handling the situation appropriately and spoke to Assistant Principal George Clark.

“I think the school is trying to cover this up. I have reason to believe this is not an isolated incident,” Taylor told Cleveland 19 News. “My daughter has to have therapy and counseling because of something you did to her. I sent her to you unbroken, and you sent me back a broken child.”

Cheerleaders declined to be interviewed for this story. Principal Jonathan Kuehnle refused to comment on the issue per district policy because it is a personnel matter. Former head coach Vikki Long did not respond to a request for comment.