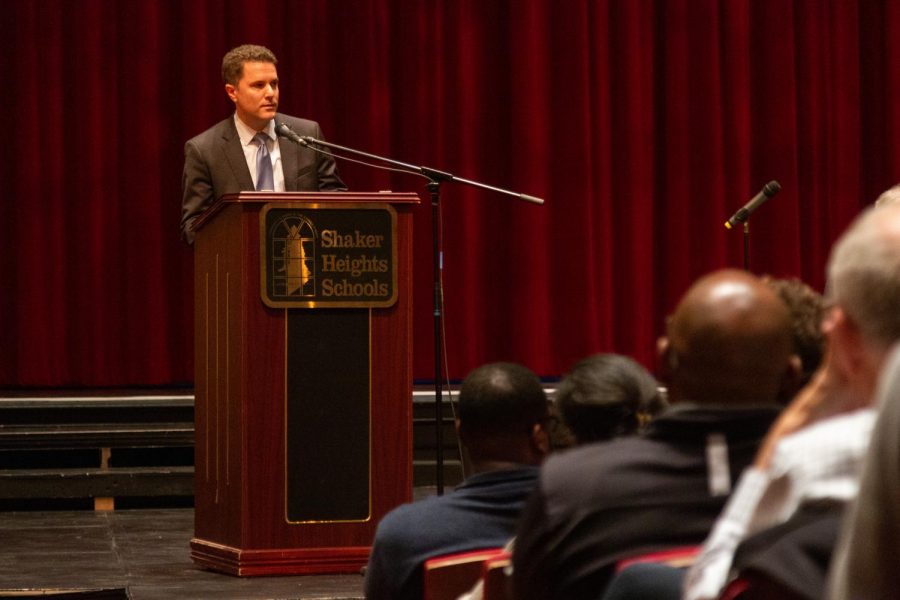 The district announced their selection of current Interim High School Principal David Glasner for the role of superintendent at 7:40 p.m. tonight. This announcement came shortly after Elizabeth Kirby of the Chicago Public Schools accepted the job of superintendent at Cleveland Heights.

Kirby and Glasner were the two finalists for the Shaker Heights position. Kirby was one of four finalists for the Cleveland Heights position. Over email, director of communications Scott Stephens explained the reason two applicants were presented as opposed to the four presented to Cleveland Heights community members. “Our board members put forward two candidates they believed were the very best of all applicants who applied. The board wanted to present its very best choices to the community,” he wrote.

“I cannot speak for Cleveland Heights-University Heights because I was not involved in their process. It is fair to say that Northeast Ohio tonight gained two outstanding new superintendents,” he continued.

The two finalists toured Shaker schools this week, Kirby on Tuesday and Glasner on Wednesday. Each met with stakeholder groups: students, parents and teachers. The board requested feedback from the community on the two candidates in the form of written responses and an online form. In an email sent by the district Wednesday, community members were asked to submit online feedback by 11:59 p.m. March 14, tonight. The announcement came before this deadline.

The board had also planned an executive session for Friday, March 15 to continue to “discuss employee personnel matters…namely relative to the Superintendent search process.” They had scheduled the decision to be released in late March.

Stephens explained why the announcement was accelerated. “Because of a simultaneous search in a neighboring school district, the Board fast-tracked its final decision, reducing time for community feedback on the two finalists by a few hours,” he wrote. “Just as community input informed the search, the input will also inform Dr. Glasner’s work going forward,”

“The process provided for robust community feedback, and that feedback informed the Board’s ultimate decision,” he continued. “It’s important to note that the Board always seeks feedback about the District — it’s not limited any one period.”

Both Cleveland Heights’ and Shaker’s searches were conducted by a national search firm, Ray and Associates. The search cost Shaker $19,000 in consultants’ fees with an additional estimate of $15,000 in expenses, though district treasurer Bryan Christman said, “The total amount [in expenses] is not expected to reach that level.”

In a March 6 interview with The Shakerite, Isaacs said that the search yielded fewer than 50 applicants, “11 or 12” of whom were interviewed by the district before narrowing the pool down to the two.

Isaacs explained the reason for using a search firm. “You want to have a process that has a lot of fidelity, so you’re going to a firm that does nothing but this. They set up the process, they know where they need to be careful, they know where they need to bring folks in,” he said. “The other thing is, you want to tap into networks that bring in people outside of just your networks, and that’s part of what these search firms are bringing to the table.”

Despite the importance of wide networks, Isaacs noted people’s interest in hiring a candidate who is from Shaker. “In the case where you know you’ve got a person who’s already suited for the job, you probably don’t have as much need for an outside firm,” he said. “If you’re not sure, or you want to make sure that you’ve got absolutely the best of the best, then maybe you’re considering both.”

“And then, finally, you’ve got to do all of the other things that are involved ‒ vet a large pool of people to make sure you don’t have folks that are inappropriate for the position that you’re looking for,” he continued.

Ryan Ray, president of the search firm, explained that, were the board not satisfied with either finalist, another search would be conducted for no consultant fee. “We have a two-year guarantee that if the candidate leaves in two years, or the board asks that candidate to leave prior to two years, we will come back and do that search for expenses only, that’s it, so no other fee,” he said.

In the March 6 interview, Isaacs also identified the board’s desired characteristics for he next superintendent: “Someone who is an excellent instructional leader, someone who’s capable of managing a team, who understands budgets and finance.”

“We really focused in on the need for someone who also could invest in relationships, could build a team that could work forward and would, sort of, listen across not only area boundaries, but also building boundaries,” he continued. “We wanted a caring leader, someone who would be intentional and thoughtful about what they were doing,”

In the announcement, Isaacs stated, “Dr. Glasner possesses the passion, intellect and vision to lead our District to new levels of excellence. Time and again, Dr. Glasner has stepped up and shown a willingness to take on big challenges. We know the entire community will join us in committing to make his tenure a success.”

Dr. John Morris, president of the Shaker Heights Teachers’ Association, applauded the decision. “I’ve been in over eight hours of meetings between Ms. Kirby and Dr. Glasner. I think that both candidates were impressive in their own rights,” he said. “But I’m pleased to see that a candidate with as much knowledge of the district and as much commitment to the district as he has shown over the past few years was chosen.”

“I think that Dr. Glasner’s presentations to the stakeholder committee, to the staff and the collective bargaining unit yesterday afternoon and then to the community were particularly impressive as was his ownership of previous problematic instances like the Nov. 8 meeting,” Morris said. “He showed that he would move in a positive direction on issues such as equity and restorative practices and healing the rifts in the community that have arisen. And he showed that he’d learned from these experiences.”