Back to School, at Last 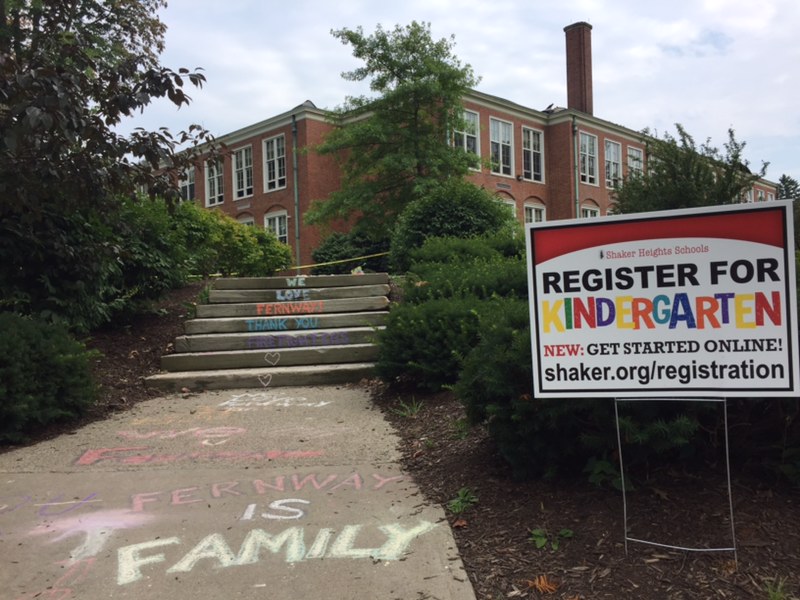 Although repairs and renovations concluded in July, COVID-19 has delayed return to Fernway

With the scheduled full onsite return of K-4 students for in-person learning in late October, Fernway Elementary School is preparing to re-open for the first time since 2018.

Although no one was injured in the fire, it was difficult for students and families in the neighborhood to see Fernway burn.

“When the school burnt down, I was already in middle school, but it still concerned me that so many children were going to be missing out on some of the excellent experiences I had in that school,” former Fernway student Carter Marston wrote in a text.

During repairs and renovation, Fernway students and staff were sent to other district buildings. Some students went to Woodbury, while others attended Boulevard and Onaway elementary schools. “The decision was made in conjunction with the district administrative team,” Fernway Principal Christopher Hayward wrote in an email. “We chose buildings that had space to house entire grade levels and keep us as intact as possible. Having us in three buildings somewhat close together also helped our families logistically to navigate the two years of being away from Fernway.”

The rebuilding process continued for about two years, and the district is preparing to reopen Fernway with the start of in-person school. The repairs included a new roof and new features such as an art room, more classrooms, elevators, the latest technology, and a cafeteria. Before the fire, Fernway students ate lunch in their classrooms because the school did not have a cafeteria.

COVID-19 slowed the rebuilding process. “The impact that COVID-19 had on the rebuild was mostly related to logistics on getting materials and supplies. It simply took longer to get products shipped,” Director of Facilities and Grounds David Boyer wrote in an email. The total cost of the rebuild was about $18 million.

The fire created an immediate opportunity to not only repair but also to improve and modernize Fernway, and School Board President Heather Weingart said the district is looking ahead to renovations of other elementary schools. She said, “Fernway will sort of be the benchmark of what’s possible, and then our goal is to draw up a long-range facilities plan that is going to provide all of those benefits in all of our buildings.”

How Are You Being Graded?

One month into this virtual school year, the high school administration has not yet released grading guidelines, leading to confusion among teachers and students.

According to Principal Eric Juli, the high school will employ grading guidelines during remote learning rather than a revised grading policy, which requires school board approval.

Students of all grade levels stated that they did not know how they would be graded this year. ”I knew it in spring, but I never got a clear answer across the board for this school year,” sophomore Hazel Smith wrote.

Juli said that students should expect far less homework, tests and quizzes. “Assessments are supposed to see if a student is understanding. In this environment, if I’m someone who has a second computer or cell phone, I can just Google the answers,” Juli said.

The Shakerite contacted seven teachers; five declined to comment or did not reply. The other two teachers said they did not know what the grading policy or guidelines were.

Students and teachers should expect grading guidelines to be released soon. Juli said, “They’re basically ready to go out. We are just reviewing and proofreading, just trying to make sure we have thought of everything we could possibly think of.”

Shaker issued new laptops to teachers as replacements for the Chromebooks for the 2020-2021 school year to help with the challenges of remote learning.

The district began issuing Chromebooks to teachers  2017 as part of an effort to help them pass the Google Level One Certified Teachers Exam, according to John Rizzo, director of technology and media services.

The Chromebooks have been running slowly, and some teachers complained that the device’s small screen prevents them from seeing their students clearly, according to French teacher Suzanne Genillier.

Teachers came to the high school Sept. 10-11 to turn in their Chromebooks and pick up Lenovo Thinkpad laptops, which are more powerful devices that have 14-inch screens. The district was planning to make this purchase at the end of the 2020-2021 school year, when the 2017 Chromebooks were scheduled to reach their end of life after four years of use. The district decided to make the purchase early due to the needs of remote learning, Rizzo said.

As of Sept. 22, 126 laptops were distributed, but the district will be issuing them to “all SHTA / SHTA-ST eligible faculty,” wrote Rizzo. This includes members of the SHTA, and any faculty who could be SHTA members but choose not to be.

The new laptops cost the district $320,450. The money came from the district’s general operating budget. The district also expects to replace the new laptops less often — anticipating a minimum of five years of use — rather than the Chromebook’s four-year lifetime.

Some teachers said the new laptops have been helping to solve problems with the old technology.

“Quite an improvement,” said Genillier. “I was impressed in terms of time-saving.” According to Genillier, the new laptops have a bigger screen and have fixed all problems she had with her school-issued Chromebook, which often performed slowly.

“I got used to Chromebooks, but laptops have better functionality,” English teacher Sharon Craig said.

The district is also launching a pilot program at Fernway in which they are considering replacing desktop computers in classrooms with laptops and docks. “We’re not 100 percent committed to this as a model across the whole district yet. We’re kind of exploring it, and Fernway’s being used as a test case on it, to see if it works,” Director of Communications Scott Stephens said.

“If the docks do not introduce technical issues and are reliable over the course of the school year, the district would then consider not replacing desktop computers in classrooms as desktops reach end of life,” Rizzo wrote. Most administrators have been using laptops with docks instead of desktops for years, according to Stephens.

Said Genillier, “[The laptop] has transformed my life.”

Fate of State Testing Not Yet Determined

Students and teachers don’t yet know whether or not state tests will be mandated this year, though schools, including Shaker, plan to start in-person classes soon.

Ohio Gov. Mike Dewine said the decision is ultimately left to the legislature, but he thinks testing is important to make sure teachers and parents have enough information about students’ learning. In a September press briefing, Dewine said using test results to rate Ohio schools may not be appropriate this year.  “The consequences that go with that– I’m not too excited about that . . . Grading schools and ranking schools — I’m not sure that’s really that important,” he said.

Federal requirements for state testing do exist, although those standards were waived in the spring. The state would need to seek federal waivers for those requirements to forego testing again. Education Secretary Betsy DeVos has said that the Trump administration plans to enforce testing requirements in the fall. This mandate does not apply to private schools, however, because they are not required to take the standardized tests.

State tests, or EOC’s, take place twice a year, in November and April. Because EOC’s have been administered online at school, senior Anna Dillenbeck said the tests could continue. “It’s a real possibility they could make us do it at home,” she said.

Dillenbeck also said that because AP testing worked so well last year, she would be more comfortable taking EOC’s at her home.

Senior DeAndre Hall, however, doesn’t think the state will allow EOC’s to be taken at home. “They probably won’t happen because there could be cheating on the tests because we are at home with no supervision,” he said. Hall said he would rather not take them at all.

Dillenbeck, however, doesn’t find the idea of taking EOC’s this year terrible. For her, the testing schedule, which prescribes half days of school, is a win. Said Dillenbeck, “I really enjoy it. It makes the day more chill.”