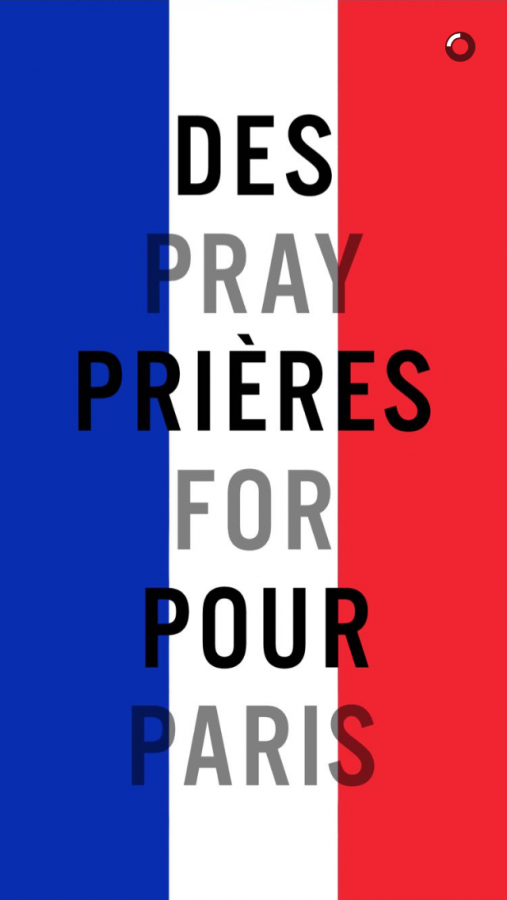 Snapchat released a new filter in light of events taking place in Paris for people to add to their photographs.

With #PorteOuverte replacing #JeSuisCharlie, Paris is once again the recipient of international sympathy.

The city is coping with eight terrorist attacks that erupted throughout central Paris last night. At least 200 people were taken hostage at a concert hall after 11 were killed at a restaurant and three were killed in a bomb explosion outside of Paris’ Stade de France during a soccer match between France and Germany. The death toll has reached at least 127.

According to CNN, the terrorists were killed after Paris police raided the concert hall where the hostages were being held. Five suspected attackers have been “neutralised.”

French President Francois Hollande declared Paris in a state of emergency and closed the nation’s borders at 2 a.m. local time.

The Islamic State has since claimed responsibility for the attacks, siting the eight locations to be, “precisely chosen targets in the center of the capital of France,” according to The Washington Post.

France has declared a state of national mourning and banned all public gatherings due to safety.

“My brother is living in Paris right now and not only that but my mom’s entire side of the family lives in France so I’m directly affected by this,” sophomore Emma Neil said. “Even though none of my family is hurt, I’m still affected.

“My brother was working in a bar at the time of the attacks so it was especially scary for him,” she said. “The atmosphere of Paris is panicked right now so it’s just a very tense time for everyone in Paris.”

“I was very worried about my friends who are still living there,” said sophomore Natalie Korach, who spent last year living in Paris with her family.

“My heart goes out to all who have lost someone,” she said. “We had a similar terrorist situation in January while we were living there, and it was terribly scary. All precautions are taken there, and I’m sure they are doing everything they can to keep the population safe from terror.”

On Jan. 7, 2015, 12 people in the offices of the French satirical newspaper Charlie Hebdo were killed and 11 other injured by terrorists associated with the group Al-Qaeda. People around the world stood in solidarity with the newspaper, using the hashtag #JeSuisCharlie to convey their sympathies.

President Barack Obama also issued a statement about an hour after the initial attacks.

“This is an attack on all of humanity and the universal values that we share,” he said earlier yesterday evening. “We stand prepared and ready to provide whatever assistance the government and French people need.”

#PorteOuverte — French for “open door” — began trending on Twitter soon after the attacks to encourage Parisians to offer shelter to people fleeing the attacks.

Students fear that Shaker schools’ frequent international travel may be affected by the attacks.

“I know the French students are planning a trip to France next year. If students are going to travel to France, they should be aware of what’s going on or what has gone on in the past,” sophomore Emma Duhamel said. “I don’t know if this event would change anything about next year’s trip, but it’s something people need to discuss before going abroad.”

“I think that there will be a lot more military presence wherever Shaker travels from now on and I think many will be more cautious,” Korach said. “It won’t affect too much travel, hopefully.”

“It is important to stand up against things like this,” Jennifer Korach, mother of Natalie Korach, said, explaining what needs to be done in the future.

“I think the world is becoming a more and more dangerous place with all these terrorist groups. I hope we can put an end to this horrible terror and stop the casualties as soon as possible,” she said. “This isn’t just a problem in Paris, I think this is an extremists’ war against democracy, and it could lead to much more.”

“If human progression is going to continue on the path it’s on,” she continued, “the whole world should be paying attention to these events and treating them the same way they’re being treated by people who are more directly affected.”