Asking For a Friend 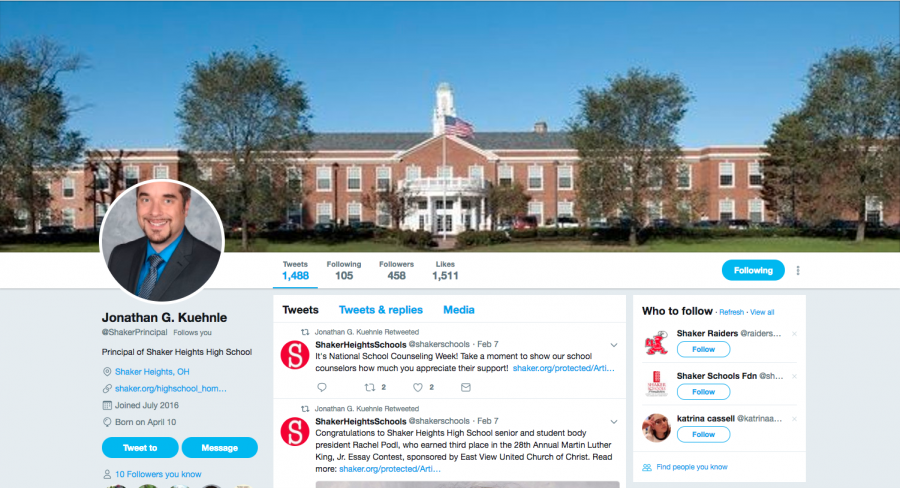 A Twitter exchange between two students and Principal Jonathan Kuehnle precipitated by the newly-implemented  student ID policy has prompted discussion about the way students and administrators communicate.

Kuehnle then responded at 8:28 a.m. to Cassell. “Sounds like a frustrating start to a Monday. Get here a few minutes earlier and remember to wear your ID, and things should go smoothly. Don’t blame the system —  adjust to it,” Kuehnle stated in the tweet. In his next response to Cassell, Kuehnle asked whether she was “allowed” to use her phone during class. His tweet identified her first period class by name and concluded, “Asking for a friend.”

Kuehnle said he meant to write “asking for a friend” as a playful remark and thought it would be taken as such. However, students who read the exchange criticized that phrase in particular.

The phrase “asking for a friend” is common in social media use and provides cover for someone who is asking a question that he or she is embarrassed or ashamed to pose. After Kuehnle’s tweet, a third student responded, asking, “As a principal are you supposed to be tweeting during work? Asking for a friend.”

Freshman James Kennedy thought that Kuehnle’s entire response to Cassell was inappropriate. “Mr. Kuehnle should have let it go and not have responded in the first place,” he said.

Following  Kuehnle’s responses, junior Hannah Braun tweeted back at Kuehnle, beginning with “This was funny Mr. Kuehnle!” She continued, “Since twitter seems to be a better way to reach you, please respond to my email regarding the sexual harassment prevention team being somewhat pigeonholed by our administration. It’s urgent!”

Braun is a member of Respect for All, a group Kuehnle recently enlisted people to join in light of his Twitter reaction to published reports of sexual misconduct at the high school.  The group has been meeting weekly since Nov. 30.

Kuehnle said that the exchange with the two students was just another form of communication between students and administrators.

However, Cassell explained that she had not expected Kuehnle to respond to her tweet. “If I knew what would’ve happened, I definitely wouldn’t have tweeted it,” she added.

Cassell said her tweet was not intended as a criticism of wearing IDs. “Honestly, it’s been taken as a vendetta against the IDs, but I really don’t even have that much of a problem with the IDs,” she said. “It wasn’t a critique on the principal. It was a critique on the school and a policy we have that could be better.”

Students voice concerns and complaints often, Cassell said, but the problem isn’t the means of communication. According to Cassell, the problem is that the administration doesn’t listen, so the method with which students and administrators communicate is unimportant.

“I don’t think there is a really great platform at this school for voicing concerns,” Cassell said.

Kuehnle considers Twitter to be one of several platforms for administrative communication, but if a matter is urgent, he said, he prefers other methods. He said that he encourages students to voice their concerns directly to him. “Stop by my office, call me, email me, whatever,” Kuehnle said.

Kuehnle’s second response to Cassell, in which he questions her use of Twitter during a particular class, may be a violation of the Family Educational Rights and Privacy Act, according to education lawyer Susan Stone. Federal FERPA laws protect educational records from non-consensual public release.

A student’s schedule is protected under FERPA laws, Stone said.

However, Stone said, Cassell initiated the exchange, which may have waived her rights to FERPA protections. If Kuehnle was in violation of FERPA laws, he would be given a warning from the U.S. Department of Education.

Braun, like Cassell, was surprised by the schools’ reaction to the exchange. She said her teachers and peers voiced their approval of her tweet. “I didn’t really expect it blow up as much as it did. But, all of my teachers expressed support on my topic,” said Braun. “A lot of my friends were texting me throughout the day, and people who I didn’t even know were telling me ‘Good job’ in the hallway.”

According to Braun, her tweet was motivated by the lack of response from Kuehnle to her email about the Respect for All group’s efforts.  “He hadn’t been responding to an email that was pretty urgent, and it was off-putting that he could be on Twitter, responding to petty school ID problems,” she said.

After the exchange, Kuehnle said, he met with Braun.

Kuehnle said the student body was surprised that he responded. “In my experience, that’s kind of a new thing — for administrators to engage with students on social media,” Kuehnle said. He said students were thinking, “ ‘Oh, my gosh he’s savvy enough to tweet.’ ”

Comparisons to the Twitter habits of President Donald Trump emerged after the exchange. “You see our president over here tweeting all the time, and he just shouldn’t,” Kennedy said. “And I feel that Mr. Kuehnle was exercising this same principle of not being professional.”

Junior Milla Costa said Kuehnle has other priorities as the leader of the school. “He’s the principal —  he has to be managing the entire school,” said Costa. “Why is he on Twitter to begin with?”